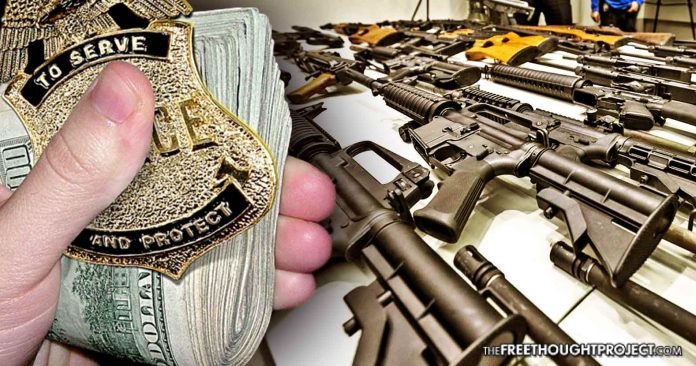 Gardena, CA – Two police officers have been indicted by a federal grand jury after they were caught illegally selling more than 100 firearms that the department deemed unsafe for the public, all while using their badges in an attempt to cover up their crimes.

The firearms sales took place between 2015 and 2017, and several of the buyers were convicted felons. Detective Carlos Miguel Fernandez, 42, and Officer Edward Yasushiro Arao, 47, were charged with a combined five felony counts that included “engaging in the business of dealing in firearms without a license and lying about it.”

The men were able to purchase “off-roster” firearms that are supposed to be reserved for police or military because of their status as police officers. They were then caught illegally selling those guns to the public, which included “straw buyers” who purchased the firearms for convicted felons who had been banned from buying guns.

As a police detective, Fernandez had no excuse for selling guns without a license, and he should have known that if he was selling firearms to a straw buyer, it was extremely likely that they would end up in the hands of convicted felons who could not purchase the guns legally.

The officers made no attempt to hide the fact that they were selling firearms, and they used Instagram to advertise their illegal activities. Fernandez used his personal account, “the38superman,” and both officers used Ronin Tactical Group’s account, which was run by Arao. Although the group did have a federal firearms license, Arao used the account to illegally sell “off-roster” firearms that he obtained as an officer.

The Los Angeles Times noted that this move by the Bureau of Alcohol, Tobacco, Firearms and Explosives marks its largest attempt to “curtail the abuse of special privileges afforded police officers in purchasing firearms.”

Both Fernandez and Arao have been with the department for 17 years, and they have now been placed on administrative leave. They pleaded not guilty to the charges at their arraignment, and their next court appearance is scheduled for April 3.

In response to the indictment, Gardena Police Chief Ed Medrano said he is deeply concerned about the officers’ actions. “This type of conduct is inconsistent with our organizational values and the ethics of our profession and will not be tolerated by the Gardena Police Department,” he said.

This case comes two weeks after Pasadena Police Lieutenant Vasken Gourdikian, 48, who was formerly the department’s spokesperson, was indicted on federal charges of selling more than 100 guns without a license, making false statements to the ATF and possessing unregistered firearms. He is also accused of using his status as a police officer to obtain “off-roster” firearms that he then sold for profit.

After more than one year on paid administrative leave, Gourdikian was finally placed on leave without pay this month after he was indicted. He now faces up to 35 years in federal prison.

As The Free Thought Project has reported, many police departments sell the guns they have seized from individuals and in the state of Washington alone, “more than a dozen of the guns sold by law enforcement since 2010 ended up in new crimes.”

The departments routinely re-sell firearms, and they do so at cheap prices, ensuring that they will continue to receive revenue in return for the items they obtained for free. As an investigation reported by the Associated Press noted, while a new AR-15 costs between $650 and $950 online, the Thurston County Narcotics Task Force auctioned two of the firearms for $250 and $370 each.

Whether police are allowed to re-sell firearms they have stolen from the public, or they are using their privilege as officers to sell firearms that the state has deemed “illegal” for the public, the fact is that in every place where police are given extraordinary power, corruption is sure to follow.