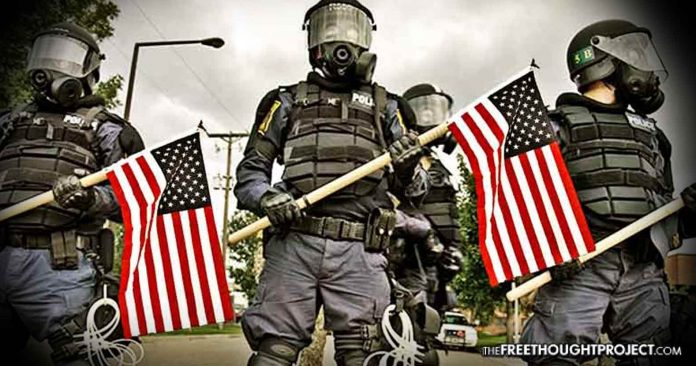 On March 24, 200,000 children, teens, and adults alike took part in the March for Our Lives rally to demand government listen to their concerns about gun violence. While the act of standing up for what you believe in and taking action to seek that change is certainly noteworthy, if March for Our Lives really wanted to save lives, they would start with government violence.

While this March for Our Lives is a predictable reaction to the tragedy that unfolded in Parkland, Florida last month, the size, scope, and overt sponsorship from the establishment seems to be unprecedented.

Every time a lunatic, who is usually on some form mind-altering pharmaceutical, goes on a shooting rampage, the do-gooders in Washington, with the aid of their citizen flocks, take to the TV and the internet to call for disarming the American people. Fortunately, most of these calls for gun control are largely ineffective at actually stripping Americans of their rights.

However, this time, several ominous incidents took place that reveal a possible chink in the armor that is the 2nd Amendment. The president of the United States went on live TV and actually called for the removal of due process. Shortly after, at least two examples have now been documented in which citizens—who broke no laws—were stripped of their due process and had their guns confiscated.

The citizens who call for themselves and their neighbors to be disarmed, likely think no deeper than the shallow speeches given by the political blowhards, designed to appeal to emotion only. Sadly, most people who call for gun control fail to realize what that actually means—only the government has the guns. To those that study history, however, they will recall that when only the state has the guns, its citizens are sheep to the slaughter.

Just as a point of reference, in the 20th Century alone, governments were responsible for 260,000,000 deaths worldwide—most of the victims were unarmed. That number is greater than all deaths from illicit drug use, STD’s, Homicides, and Traffic Accidents — combined.

If these young adults really cared about saving lives then why are they advocating that the world’s deadliest police force—who routinely kills innocent men, women, and children—be the only ones with guns?

According to the Washington Post, “1 in 13 people killed by guns are killed by police.”

As journalist Celisa Calacal recognizes, “It is often the case that police shootings, incidents where law enforcement officers pull the trigger on civilians, are left out of the conversation on gun violence. But a police officer shooting a civilian counts as gun violence. Every time an officer uses a gun against an innocent or an unarmed person contributes to the culture of gun violence in this country.”

John W. Whitehead makes the powerful point that “violence has become our government’s calling card, from the more than 80,000 SWAT team raids carried out every year on unsuspecting Americans to the military’s endless wars abroad.”

The death toll from police is equal to 227 Parkland shootings—in just the last 3 years.

In the last four decades, mass shootings have tragically taken the lives of 816 people. If we compare the number of people killed by police in just the last three years, police have killed nearly five times as many citizens as all mass shooters—in less than one-tenth of the time.

And that’s just the domestic death toll. When we look outside of the United States and into the countries in which the US is currently “spreading democracy,” the US government’s death toll skyrockets.

Since the US invasion of their countries, over one million people in Iraq and Afghanistan alone have been sent to an early grave—many of them women and children.

When we look at the US support for wars like the one currently taking place in Yemen, the genocide being carried out—with the aid of the United States—is far greater.

During the March for Our Lives ‘protest’, these young Americans repeated the chant, “enough is enough.” We agree.

If those who call for gun control are really concerned with saving lives, then they need to take their attention off of law-abiding American citizens and turn it toward the state.

The state is the largest killer in the world. The state is the world’s largest purveyor of violence. And, as long as people fail to recognize this fact and continue to ignore the violence carried out at home and abroad, we can only expect it to get worse. Indeed, enough is enough.

“The greatest purveyor of violence in the world today: my own government.” – Martin Luther King, Jr.