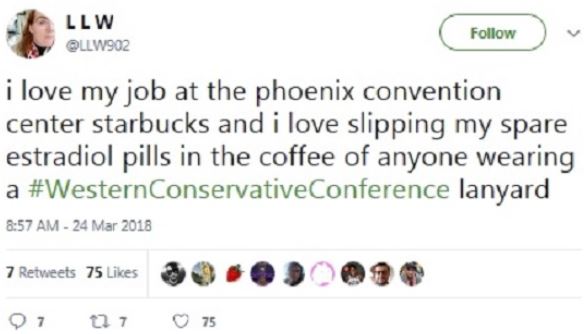 Rebekah Baker reports for The Western Journal that on the morning of March 24, a MtF transgender Starbucks employee, whose Twitter handle is “LLW”, bragged about spiking the drinks of unsuspecting customers attending the Western Conservative Conference with a prescription drug, Estradiol:

Estradiol is an estrogen steroid hormone and the major female sex hormone. It is involved in the regulation of the estrous and menstrual female reproductive cycles and is. responsible for the development of female secondary sexual characteristics such as the breasts, widening of the hips, and a feminine pattern of fat distribution in women. Estradiol is used as a medication, primarily in hormone therapy for menopausal symptoms. “The most common estrogens used in transgender women include estradiol (which is the predominant natural estrogen in women)”. (Wikipedia)

This is LLW’s Twitter profile (now deleted). He calls himself “Lauren”:

LLW has since taken down his Twitter page. If you go to @LLW902, you get this message:

But swift reactions from conservatives, citing the tweet, show LLW indeed had sent the tweet. Here’s a sample:

According to WND, LLW is Lauren Walker, who is raising money for “facial feminization surgery” as part of a transgender procedure, through the YouCaring crowdfunding site. However, Starbucks says Lauren Walker does not work for the coffee chain.

On his YouCaring page, Walker identifies himself as LLW on Twitter:

Any questions can find me at @LLW902 on twitter.

WND says security personnel for the Phoenix Conservative Conference had called police in response to the threat, but said they were unaware of any action taken by law enforcement.