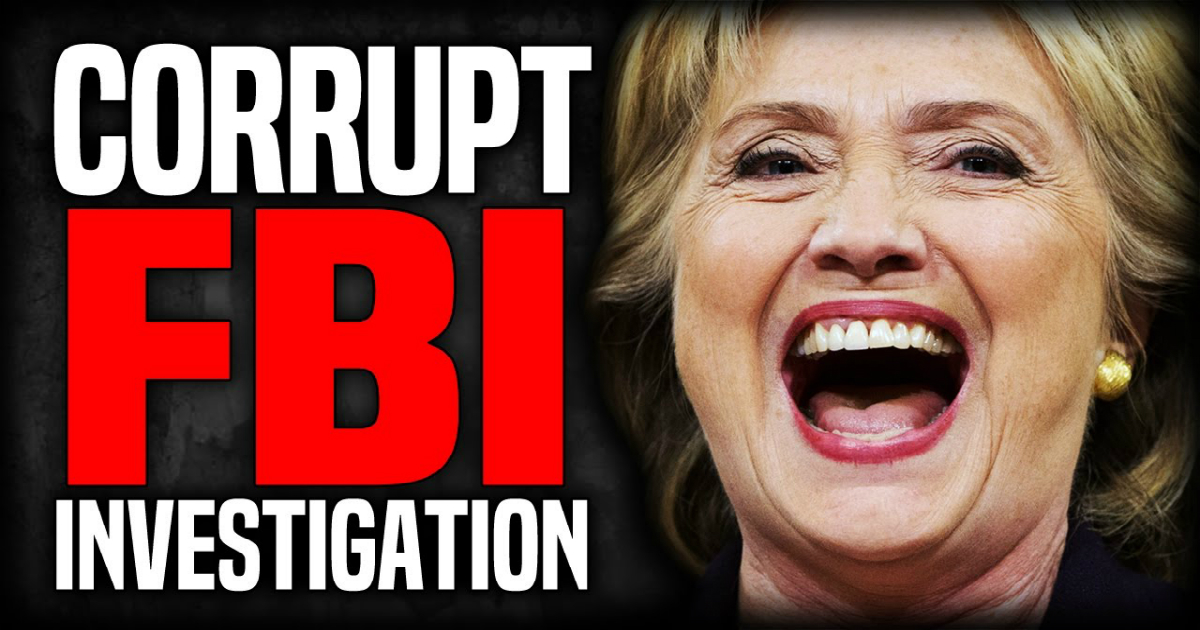 This should be big news.

In fact, this should have led the evening news on Sunday night, and there should be some kind of media investigation of this planned today… but there wasn’t, and there won’t be.

The reason this story didn’t lead the news yesterday, and that the media won’t be investigating it today (or ever) is because it doesn’t fit the liberal narrative.

Senator Lindsey Graham (R-SC) appeared on the Fox News Channel Sunday morning to continue his call for a second special counsel to investigate the FBI’s behavior during the 2016 elections.

Graham, along with several other members of Congress, contend that the FBI’s behavior in recent years has been downright scandalous. Whether it’s the way they acquire their FISA warrants, how they investigated Hillary Clinton, or their rationale for constantly investigating (and yet never finding any evidence of wrongdoing) President Trump.

“I want to be able to prove that the FBI investigation of the Clinton email scandal was a sham. That the lead investigator, the lead FBI agent, hated Trump, supportive of Clinton. They whitewashed the email scandal. If you had done what she had done you’d probably be in jail right now, and to hold the FBI accountable for not doing their job correctly, that Comey, I think the fix was in. And when it comes to the dossier, that was used by the Department of Justice to get a warrant against Carter Page. It was prepared by a paid informant of the Democratic Party, a foreign agent with ties to Russia, it is completely unverified and it should have never been used as a basis for a FISA warrant. And I want a special counsel to look at all of this like Mueller is looking at Trump.”

Later Graham excoriated the FBI for abusing the FISA system:

“And here’s the question, how much effort did the FBI put into verifying the dossier? I can tell you the answer, NONE. Steele had worked with the FBI in the past, they took the dossier for face value. They never did anything to verify it, and we can tell you now in March 2018, it is still unverified. It’s a bunch of political garbage, fed to Steele by the Russians to embarrass the President. It was used to get a warrant and every American should be concerned about how the FISA process was abused.”

Senator Graham further argued that a special counsel is needed because if there is no accountability, “it will be a terrible day for the system. The Department of Justice cannot investigate itself. You’re going to have to have somebody come in with a fresh view of this, has nobody to reward, nobody to punish. The Inspector General is limited institutionally as to what he can do, but I am really intent on having new eyes look at what happened at the DOJ and FBI because they can’t investigate themselves… I can’t believe it is taking this long.”

.@LindseyGrahamSC: "I want to be able to prove that the FBI investigation of the Clinton email scandal was a sham. That the lead investigator, the lead FBI agent, hated Trump, supportive of Clinton. They whitewashed the email scandal." #SundayFutures @MariaBartiromo pic.twitter.com/zII81ijk9x

The segment ended with Senator Graham telling America about the Taylor Force Act, and how Graham hopes it will push the Palestinian Authority to stop committing acts of violence against innocent people.

The Taylor Force Act, legislation that cuts American funding for the Palestinian Authority over its payments to convicted terrorists and their families, officially became a law on Friday evening, after President Donald Trump signed a large budget bill that the act was a part of. The PA protested the passage of the legislation, which is named after Taylor Force, an American citizen murdered in a terror attack in Tel Aviv two years ago.

The bill was first introduced by Republican lawmakers in March of last year. Over the last 12 months, it has gone through a modification process that produced wide bipartisan support for it. The final version that became part of the wider budget bill includes a number of exceptions for projects that will continue to receive American funding, such as hospitals in East Jerusalem, wastewater programs and child vaccination initiatives.

The bipartisan bill’s passing was cheered by Senator Chuck Schumer (D-NY), “passage of the Taylor Force Act will serve as a shot across the bow to President Abbas, as he must be held accountable for the Palestinian Authority’s record of incitement and subsidizing of terror.  It is my hope that by enacting this bill we can put an end to the Palestinian Authority’s disturbing practice all while honoring the memory and sacrifice of Taylor Force.”

Wow, there’s finally something that Chuck Schumer and I agree about.