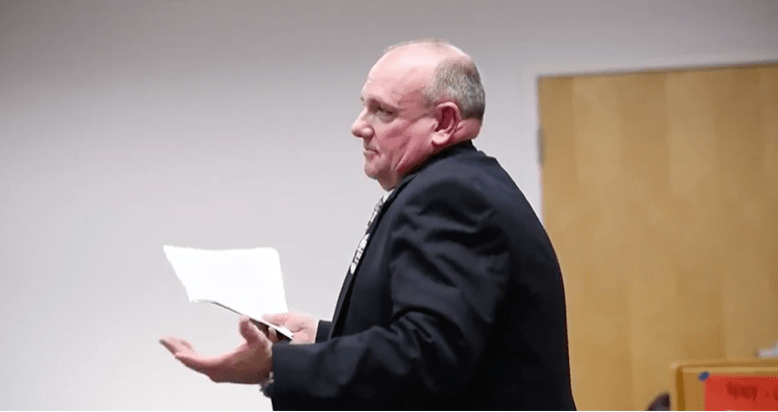 (Natural News) In recent days I wrote that in my learned experience the Democratic Party and its supporters have historically been the biggest threat to the Second Amendment since it was ratified in 1791 with the rest of the Bill of Rights.

A Democratic candidate for sheriff in a North Carolina county told a gathering of supporters that he’d have no problem at all killing gun owners who refused to turn in banned firearms.

In a video taken during the recent event, R. Daryl Fisher made his threat by referencing a popular phrase often used by pro-Second Amendment advocates, in the context of favoring a ban on so-called “assault weapons.” (Related: Left’s gun control front man David Hogg suddenly cares about the Constitution, but can’t correctly cite it.)

“Any weapon that is designed for use by the military, I think we should ban them,” he said. “You’ve heard people say, ‘you have to pry my gun from my cold, dead hands, (shrugs) Okay.”

And that was followed by cheering and clapping, by the way.

As The National Sentinel noted further:

Pro-gun advocates have often claimed that Democrats are anti-gun and would use force to round up guns they deem unsuitable for private use, despite the plain language of the Second Amendment and prior Supreme Court rulings noting that firearms ownership is an individual right.

Absolutely right. But in response, Democrats have always said it was ridiculous for Second Amendment supporters to even suggest that.

And yet, we now have a candidate for sheriff who openly threatened to kill any county resident who did not turn over a gun that local governments have no call or constitutionality to ban in the first place.

As many who have read this candidate’s comments have said on social media, ‘People like him are exactly why our founders wrote the Second Amendment in the first place.”

I don’t know whether this candidate will win but if he does, then North Carolinians living in his county who do not agree with his point of view on gun ownership may soon have a serious decision to make about whether they want to remain in that county. If he wins, that means his point of view on guns is pervasive enough that a voter-imposed ban on certain guns can’t be far behind.

The “March for Our Lives” protests, which were held nationwide on Saturday, provided more evidence that Democrats are the biggest threat to our rights, and especially our gun rights:

— A portion of the event was financed by ActBlue, which is a fundraising organ for the Democratic National Committee.

— The event was planned in the wake of the Parkland, Florida, school shooting, but the events on Saturday were about gun control and gun bans, not improving school safety.

— The Democrat-supporting American Pravda media studiously avoided talking to anyone with a pro-gun viewpoint.

— Parkland, Fla., students who support the Second Amendment and believe there are better, more effective ways to improve school safety — like hiring an armed school resource deputy who actually tries to protect students and faculty during an actual active shooter incident — were not invited to speak at the main event in Washington.

All this said it is now pure folly for Democrats to continue arguing that they’re ‘not coming for our guns.’

They are coming for our guns, and like every gun control measure in the past, they’re pretending like it’s a “common-sense” effort aimed at “improving public safety.”

Wittingly or not, Democratic supporters are helping the Marxists who run the party now accomplish what every other tyrannical movement before them has accomplished: Total enslavement of the population.