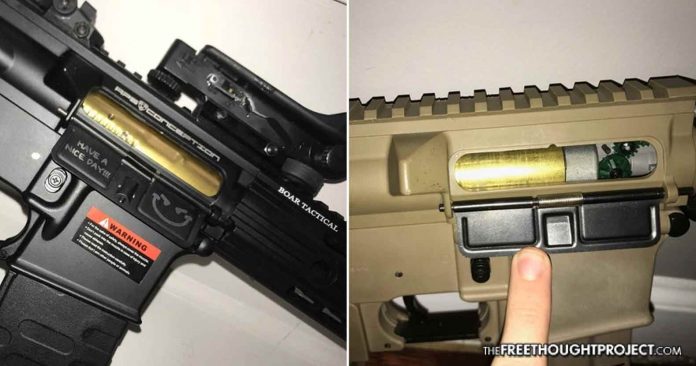 Woodbridge, Connecticut – A teenage boy was arrested and detained for the crime of posting a photo on social media of a toy gun he received as a birthday gift. Despite the fact that the photo included a “Warning” sticker on the gun, which stated that it was a toy, the student was suspended from school and treated as a criminal.

As a senior at Amity High Regional School, Zach Cassidento said he did not think he was doing anything wrong when he received a new airsoft gun for his birthday and posted a photo of it on Snapchat.

The toy was in Cassidento’s home and he did not have any intention of bringing it to school or using it harm anyone. In fact, the only message on the photo was the words “Have a Nice Day,” which were part of the gun’s design, and a warning sticker stating that it is a toy gun.

“I didn’t want to put any words and someone misinterpret it as a threat so I figured I posted this picture on my own time, on my property,” Cassidento told WTNH News.

He also noted that his photo of the gun actually showed that it was empty and there were no bullets in the chamber.

“I took a picture. It was about halfway up the barrel of the gun. It showed the trigger. It showed the magazine. And it cut off just by the stock. It also showed the chamber open with no bullet in there and the warning sticker stating that it is a toy gun,” Cassidento said.

Then when Cassidento went to school, he said he was taken out of class and a school resource officer took his possessions and searched him for weapons after a student reported the photo to school authorities.

“They took my phone and my backpack and pulled me into the office, out into the hallway where the officer told me to put my hands out and he checked me,” Cassidento said.

The student’s mom, GraceAnne Cassidento, told WTNH that she was shocked when he heard how her son was treated, and she believes there was no malicious intent in his decision to share a photo of the toy gun with his friends.

Ms. Cassidento also said the school failed to contact her to tell her that they apparently believed her son was planning to carry out a school shooting, and when they finally did call her, it was only to tell her that police were coming to search her home.

“They searched my son at school. They didn’t call me. they didn’t tell me what was going on. They did not call me until he’s already been arrested, searched, brought to the office, harassed,” Ms. Cassidento said. “Then they called me because I had to meet them at my home to have five officers come into my home and search my house.”

The paranoia over students posting photos of weapons on social media comes after Parkland shooting suspect Nickolas Cruz posted a number of photos of his collection of weapons on Instagram in the months before he shot and killed 17 students and teachers.

The case in Woodbridge also serves as a reminder that the school resource officer who arrested and searched Cassidento did so without fully evaluating the situation. As The Free Thought Project has reported, a number of school cops have been caught on camera harming students in recent years.

The sheriff’s deputy who was on duty at the high school in Parkland chose to wait outside of the school while children were murdered inside, instead of putting his own safety at risk. Former deputy Scot Peterson can be seen on surveillance footage standing outside of the building and refusing to go inside and confront the shooter, even after he said over his police radio, “Be advised we have possible, could be firecrackers, I think we have shots fired, possible shots fired—1200 building.”

Zach Cassidento was suspended from Amity Regional High School for one day for “disrupting the educational process,” and it remains to be seen whether police plan to release the footage of his arrest, or whether the Cassidento family plans to file a lawsuit after their son was treated like a criminal for sharing a non-threatening photo of a toy gun.