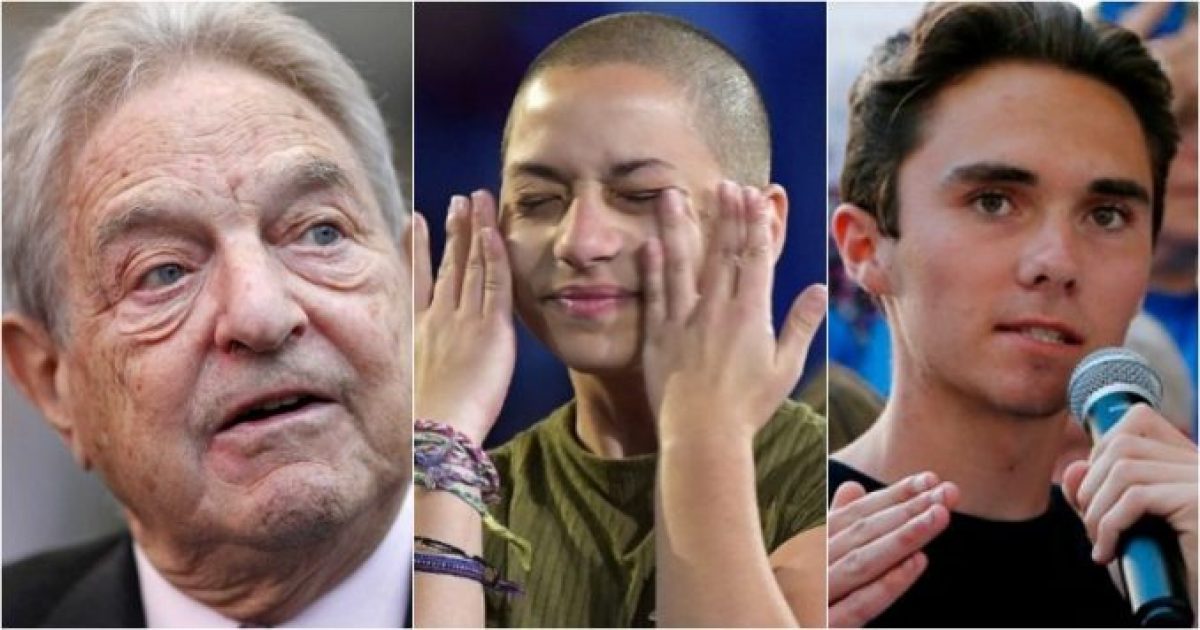 No one really knows how true the statement, “Truth is stranger than fiction,” can be until one comes face to face with the comparisons.  Last Saturday, the entire republic watched as the Anti-Freedom Four (AFF) led by David Hogg and Emma Gonzalez descended upon Washington, DC, in what the lamestream enemedia dubbed “a grassroots movement” to protest the God-given individual unalienable right of people to keep and bear arms, accompanied by hundreds of thousands supporters.

That’s right, these individuals are protesting against rights, not the taking away of rights;  but, the rights people have that were given by God.

It’s a first to be sure.

The AFF Parkland students were backed by numerous organizations – many funded by George Soros.

Soros, a Nazi collaborator, assisted the Nazis in sending Jewish Germans to concentration and death camps – a war criminal to be sure who has not ever been held to account for his crimes.

Needless to say, these “children” do not mind having someone with plenty of blood on their hands paying for their anti-constitutional ideology while they chastise the NRA, wrongly accusing the organization and members of having blood on their hands.

Adult protestors don’t seem to mind that at all either.

One prominent figure at the protest was Al Sharpton’s half-brother, Rev. Kenneth Glasgow, Glasgow’s group participated in the protest to have government strip away the rights of the people to keep and bear arms.

However, Glasgow is an ex-criminal convicted for armed robbery and other crimes, admitting he had engaged in selling drugs.

However, Glasgow supposedly turned over a new leaf, going to seminary and founding a ministry in Alabama called “The Ordinary People Society” and has worked to restore the voting rights of convicted criminals.

Yet, on Monday, Glasgow was charged with the Sunday shooting death of a woman in Dothan, Alabama.

The half-brother of Rev. Al Sharpton, also an activist whose group participated in Saturday’s anti-gun March For Our Lives, has been charged in a Sunday shooting death in Dothan, Ala.

Dothan police said that Rev. Kenneth Glasgow was the driver in a car linked to the murder of 23-year-old Breunia Jennings of Dothan by passenger Jamie Townes, 26.

Dothan Police Chief Steve Parrish said that Glasgow and Townes allegedly searched for Jennings, who they believe had stolen Townes’ car. When they found her, Townes allegedly shot Jennings as she drove, hitting her in the head. She died later.

“Instead of him notifying law enforcement, he took matter in his own hands and jumped in Mr. Glasgow’s vehicle to find Breunia Jennings,” said Parrish, according to a report in the Dothan Eagle.

While police do not believe Glasgow, 52, was the triggerman, under Alabama’s aiding and abetting law, he is culpable for murder.

According to The Dothan Eagle:

Glasgow is reported to have driven the car in which 26-year-old Jamie Townes fired the shots that killed Breunia Jennings, whom reportedly stole Townes’ car.

It is not unprecedented for individuals to be found guilty under Alabama’s aiding and abetting law.

In 2009, a Houston County jury returned guilty verdicts of kidnapping, attempted murder and robbery against a Wiregrass woman who drove a person to a convenience store to commit a robbery. The man, Andrevis Davis, shot two Dothan Police officers who responded to the robbery. Authorities charged Teona Sterling under Alabama’s aiding and abetting law. Sterling was sentenced to a combined 235 years. She has served 10 and is eligible for parole in 2023.

It is certainly ironic that these “children” and those supporting them do not mind a war criminal providing funds to support the infringement of the people’s rights by government and do not mind an individual convicted of armed robbery, who, then, was charged with capital murder in an incident occurring the day after the protest, supporting their efforts.

Brad Thor couldn’t make this stuff up.  Think about it.  A war criminal, who assisted the Nazis to kill millions of unarmed Jews, and an individual convicted of armed robbery and now charged with capital murder under Alabama’s aiding and abetting laws funded and supported the protesters calling for disarming American citizens of AR-15s.

George Soros admitted having no remorse in a CBS “60 Minutes” interview with Steve Kroft and Kenneth Glasgow questioned the charges filed against him in court, as though just driving a car while someone fired a gun from it into another car, killing the driver, was nothing more than joy-riding.

Never mind that on Tuesday evening, a Houston woman was attacked by three armed men, managed to get away, run into her house and defend herself using a firearm.

Instead of being a victim of murder or rape, the woman, after being attacked and beaten, escaped and defended herself with a firearm (good guy with a gun thwarting bad guys with guns), as the perpetrators attempted to enter the home, suffering the theft of her wallet in the process.

None of this is what the lamestream enemedia will report or acknowledge.

It’s difficult to push an agenda when the “movement” is supported and funded by criminals.

Furthermore, the lamestream enemedia labels those speaking against the “children” as “bad guys.”  Forget politicians recognizing this either – Soros funds many of these charlatans.  And, don’t expect the “children” to know or care.

Their agenda is clear and follows along Soros’ ideology.

It was Parkland student, Delany Tarr, who said, “When they give us that inch, that bump stock ban, we will take a mile.”

America, you have been warned.

The right to keep and bear arms is essential to other rights and freedoms and protection from tyranny.

Government is famous for taking the mile when given an inch, just as these students have said.

Remember, an unarmed populace is a playground for criminals and tyrannical government.