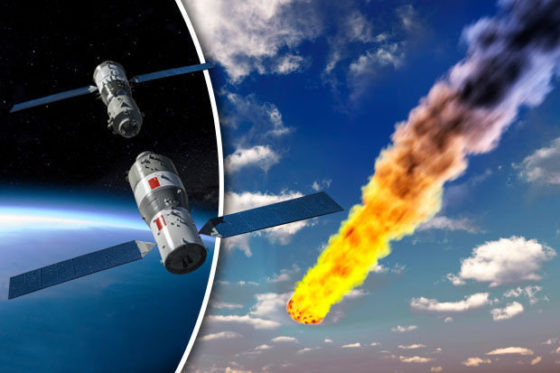 Even though scientists have known that the Tiangong-1 space station is out of control and hurling toward the Earth for weeks, they’ve just now pinpointed when it will strike the planet.  But they still have no idea where the fiery remnants are going to land.

No one should be concerned about getting squashed by this erratic space station when it hits, but with its impact right around the corner, scientists are having an incredibly difficult time narrowing down the spot where they think it could hit, according to The Daily Mail.

Tiangong-1 is China’s first Space Station Module. The vehicle was the nation’s first step towards its ultimate goal of developing, building, and operating a large Space Station and it is set to die a fiery death as it reenters the atmosphere.

Tiangong, which translates to “heavenly palace,” is being closely monitored by the European Space Agency (ESA), based in Paris and their Space Debris Office in Darmstadt, Germany, and were able to make the prediction that the space station will hit Earth earlier this week.

In recent days Aerospace, a US research organization that advises government and private enterprise on space flight also updated its re-entry window. It said the space station will enter the Earth’s atmosphere on April 3, give or take a week. “Every couple of years something like this happens, but Tiangong-1 is big and dense so we need to keep an eye on it,” Jonathan McDowell, an astrophysicist from Harvard University told the Guardian.

While most of it will burn up during re-entry, around 10 to 40 percent of the satellite is expected to survive as debris, and some parts may contain dangerous hydrazine. However, due to changing conditions in space, it is not possible to accurately predict where the module will land. “It is only in the final week or so that we are going to be able to start speaking about it with more confidence,” said Dr. McDowell. “I would guess that a few pieces will survive re-entry. But we will only know where they are going to land after after the fact.” –SHTFPlan

Chinese scientists lost control of Tiangong-1 back in 2016 and the last humans were on the space station in 2013.  This space station is China’s first. Areas that could be hit include New York, Barcelona, Beijing, Chicago, Istanbul, Rome, and Toronto. When the station does eventually enter the atmosphere it could unleash a ‘series of fireballs’ that will be seen by observers.”

Another concern is the highly-toxic corrosive chemical on the spacecraft could be spread over the planet when Tiangong-1 crashes – regardless of it hits land or water. The substance, called hydrazine, is used in rocket fuel and is believed to cause cancer in humans.