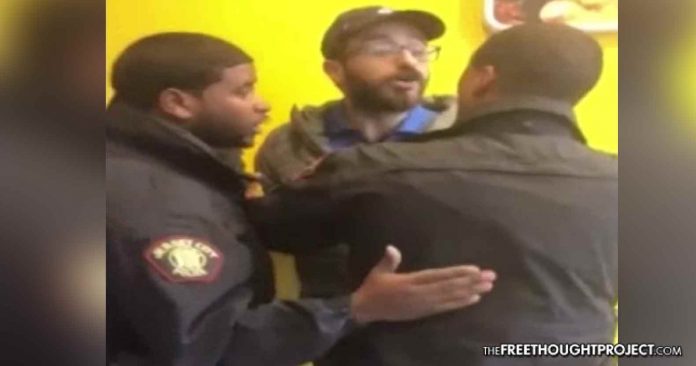 Jersey City, NJ — Two New Jersey police officers have been suspended without pay after multiple videos showed them attacking a Domino’s manager while on Duty. Surprisingly, both of them have also been charged with multiple crimes.

Rodney Clark and Courtney Solomon are both charged with disorderly conduct, harassment and making terroristic threats after they stormed into a Domino’s pizza restaurant and began shaking down the manager.

Marina Elsamina, an employee at the Communipaw Avenue pizza shop, told The Jersey Journal in an interview that workers there received an online complaint on Tuesday evening by one of the police officers, apparently over a delivery issue, according to NJ.com.

Shortly after receiving the complaint, the officers showed up at the store and began attacking  the manager, Mena Kirolos. The initial confrontation was captured on employee cellphones as well as surveillance video.

After the officers threw the innocent man up against the wall, they then demanded he go outside. According to the video, Kirolos, and multiple witnesses, cops made several threats toward him while physically assaulting him and saying they were going to lock him up—over pizza.

As NBC New York reports, Kirolos said at that point, the more irate of the two officers told him “I’ll lock you up,” and the cellphone footage then shows the manager holding his hands out as if they were cuffed as he says “please do it!”

During the attack, the manager called 911 and the officers then left.

The dispute happened after cops claimed that the driver never showed up with their pizza. However, according to the Domino’s employees, the driver went to the address and knocked for several minutes but nobody answered the door nor the repeated calls back to the number.

Instead of simply asking for a refund, these officers used their police powers to assault an innocent man and threaten him with kidnapping.

“We confront customers every day who fight with us, but he’s using his police powers,” Elsamina said.

“The prosecutor’s office will fully investigate the allegations against these officers and prosecute in accordance with the law to ensure that justice is served,” Hudson County Prosecutor Esther Suarez said in a statement. “Officers who abuse their power and break the law must be held accountable for their actions.”

As NJ.com reports, the cops in New Jersey are on a seeming rampage lately as they’ve been the subject of repeated stories of violence and corruption.

“Eleven cops, including the former police chief, have pleaded guilty in federal court to collecting pay for off-duty jobs they did not perform. Earlier this month, another officer was sentenced for striking a man with his police car during an arrest. Four others face charges related to a scheme to falsify timesheets. Four additional cops were indicted last year on charges related to a high-speed police pursuit that ended in a fiery crash on Tonnelle Avenue,” reports NJ.com.

Both of the officers seen in the video below have been on the force since 2015 and they are now due in court on April 11.

As for Kirolos, he just wants an apology—one that will likely never come.

“I don’t like being cursed at, being touched,” he said. “I only demanded an apology. That’s it.”