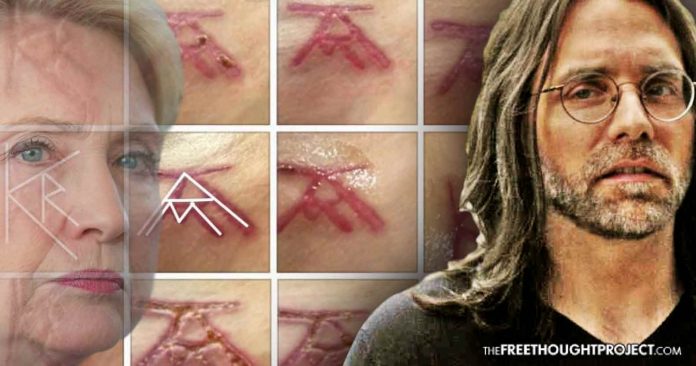 When the reality of a secretive women’s “self-help group” began to come to light last year, there were several questions about why it was reported members of the group were forced to submit nude photos as collateral when they joined or why they were “branded” with the founder’s initials. Now, the latest reports expose this group is actually an elite sex slavery cult, and federal authorities have moved in to take out the alleged leader.

After several former members begged for law enforcement’s help last October, police appeared to sit idly by without acting. However, it appears that has now changed.

As the NY Times reports, according to the complaint, female followers of the group headed by Mr. Raniere were forced to have sex with him because they feared that if they did not do so, compromising material they had provided about themselves would be released publicly.

For two decades, Mr. Raniere has served as the leader of an organization near Albany called Nxivm (pronounced Nex-e-um). The group, which describes itself as a “self-help” organization, denies it is a cult. But former members have said that Mr. Raniere demands obedience from his followers, who refer to him as “Vanguard.”

The group has attracted around 16,000 members over the last 20 years, and while it labels its courses as ones that are “designed to bring about greater self-fulfillment by eliminating psychological and emotional barriers,” one former member described the horrific, scarring, initiation process.

Sarah Edmondson said she was among five women who were told to undress and lay down on a table where other members restrained their arms and legs. They were instructed to say, “Master, please brand me, it would be an honor,” before a doctor used a cauterizing device to “sear a two-inch-square symbol below each woman’s hip.”

A previous report from the New York Times claimed that Raniere, 57, has been described by former members as “a man who manipulated his adherents, had sex with them and urged women to follow near-starvation diets to achieve the type of physique he found appealing.”

While the report claimed that “several former members have asked state authorities to investigate the group’s practices,” it noted that “officials have declined to pursue action.”

Only after the mainstream media began shedding light on this case did authorities actually look into it.

According to the official complaint Raniere denied knowing about branding women. However, an email obtained by the Times showed that not only did he know about it, but he bragged about it being a tribute directly to him.

“Not initially intended as my initials but they rearranged it slightly for tribute,” Raniere wrote in that email, “(if it were abraham lincolns or bill gates initials no one would care.)”

Last year, former Dynasty actress Catherine Oxenberg, who met with prosecutors in the office of NY Attorney General Eric Schneiderman, “presented evidence that her daughter India is being blackmailed by a cult leader.”

Oxenberg told the Times in October that she became concerned after she saw that her 26-year-old daughter India was extremely emaciated from dieting, and was suffering from serious health problems.

Several former members also told the Times that “Submission and obedience would be used as tools to achieve those goals,” and the group was made up of “circles” led by “masters” who recruited six “slaves,” and then trained the slaves to create circles of their own.

According to a report from The Sun,  former NXIVM spokesperson Frank Parlato revealed that the members are repeatedly beaten, and Raniere has “a harem of women who willingly sleep with him, believing that they will ‘be healed’ by having sex with the 57-year-old — who they apparently call ‘Vanguard.’”

Parlato also claimed that Oxenberg’s daughter is not the only tie to Hollywood. In fact, he said an “Emmy Award-winning actress is a key recruiter for DOS,” a secret society for the highest-ranking members in NXIVM. A report from the Daily Mail identified that actress as Allison Mack, known for her role on Smallville.

As the Mail reports, DOS operates as a master-slave hierarchy, with Raniere at the top and Mack as his immediate subordinate. From there, Mack has several slaves of her own who are then ordered to recruit a group of slaves themselves, and it spreads down from there like a pyramid scheme.

Slaves must immediately answer their masters any time they text or call them, and if they do not recruit enough slaves of their own, they are beaten with a paddle on their buttocks.

This week, Mack’s former co-star, Kristin Kreuk broke her silence on her role in the scheme too.

Making this case even that much more ominous is the fact that NXIVM executives are long time Clinton dynasty donors and at least three NXIVM officials are “invitation-only” members of the Clinton Global Initiative.

On March 14 and April 13, records show, more than a dozen contributions poured into Clinton’s coffers from NXIVM, an executive and group-awareness training organization led by Brooklyn-born Keith Raniere, 47.

Most were from first-time political donors, each giving the $2,300 maximum.

Hillary isn’t the only Clinton NXIVM officials are attracted to.

At least three of them – group President Nancy Salzman and the Bronfman sisters – are members of Bill’s charitable organization, the Clinton Global Initiative. Membership is by invitation only and requires at least a $15,000 donation per person for one year.

According to prosecutors, Raniere “has a long-history of systematically exploiting women through coercive practices for his own financial and sexual benefit.” And, this has been going on since he operated out of Arkansas during then-governor Bill Clinton’s tenure.

Hopefully, now that he’s been brought in after decades of abuse, this madness will stop.