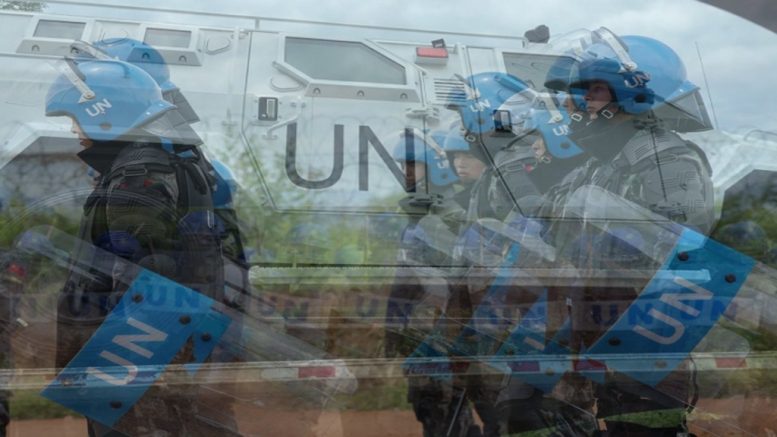 Does that opinion come about from my learning many years ago that the New World Order top honcho’s family, that of the late David Rockefeller, donated the land in Manhattan on which the U.N. was built?  In 1946, John D. Rockefeller Jr. made an $8.5 million donation to purchase the 16 prime acres next to the East River; and the rest, literally, is history!

The United Nations, in my opinion, always has been a dual governance society seemingly talking out of both sides of its proverbial mouth specifically promoting a “one world government.”  In recent years it’s become a driving force in the New World Order agenda with issuance of Agenda 21 [1] and Agenda 2030 [2], now called “Resilience.”

However, that being said, the UN needs to recall the adage, “People who live in glass houses shouldn’t throw stones.”  The UN apparently has been a ‘hot bed’ of sexual harassment, assaults and abuses, with denial of those abuses for many years, according to a March 24, 2018 article published at The Intercept: “Survivors of Sexual Abuse at the U.N. Say Their Stories Have Been Ignored For Far Too Long”.  Who would have thought?

According to the above article,

“Wherever you go [within the U.N.], you’ll find a patriarchal system that looks nothing like the world that the U.N. preaches it is striving for,” said Paula Donovan, a former U.N. employee and co-director of Code Blue, which advocates for an end to sexual assault at the U.N.

Donovan and others point to extensive data on widespread sexual assault and exploitation by U.N. peacekeepers as evidence of a culture of pervasive abuse and silencing of survivors.

The Associated Press last year investigated nearly 2,000 cases of sexual assault by U.N. peacekeepers from 2004 to 2012, finding that few perpetrators were jailed. In a statement to The Intercept, a U.N. spokesperson said the organization has created a new task force and is working to educate local populations about the risk of abuse, strengthen complaint mechanisms, and end impunity. Critics say the U.N. has taken similar steps in the past to little effect. [CJF emphasis]

It seems the UN has granted itself special “diplomatic immunities” of sorts, and the following, taken from the above article, substantiates the UN’s position:

Since the U.N.’s founding, it has operated outside the jurisdiction of national courts. Meant to protect staff from capricious or corrupt local justice systems, a 1946 convention states that the U.N. “shall make provisions for appropriate modes of settlement of … disputes,” which has taken the form of an internal U.N. justice system. That system is the only one in which survivors can seek recourse if they suffer assault by a U.N. worker, retaliation by a U.N. actor for reporting assault, or even assault by an outsider, in cases where local authorities fail to act.

“I’ve litigated against the U.N. for 23 years, and it’s a systemically corrupt system,” said Edward Flaherty, an attorney who has represented whistleblowers, sexual harassment survivors, and other U.N. employees. “The U.N. claim to be humanitarians, but they’re anything but when it comes to their own staff.” [CJF emphasis]

Here is what’s needed at the UN, according to the article:

Donovan said an impartial court, independent from the U.N. system, should investigate and adjudicate abuse allegations, “whether it’s a claim of sexual harassment or a whistleblower’s claim of widespread violence, or anything in between.”

An overhaul of U.N. culture and leadership is necessary for change, added Martin. “Our corrupt management are not providing any leadership on this. They haven’t created a climate where people can come forward and talk about it honestly,” she said. “A wholesale culture change needs to happen.”  [CJF emphasis]

And yet, the premiere wannabee- global-governance-force, which cannot administer its own culture ethically, wants to dominate the globe as the “one world government”!  I say absolutely, positively, emphatically, NO!

What are my readers’ thoughts?

History of the United Nations
https://en.wikipedia.org/wiki/History_of_the_United_Nations