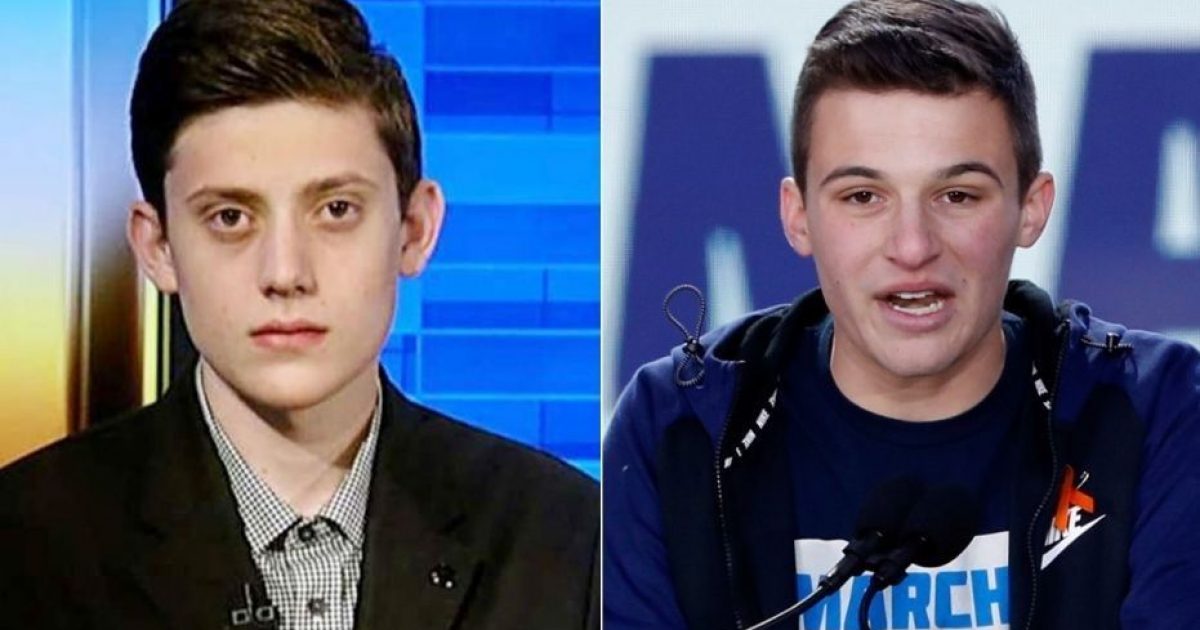 Some of these useful idiots just don’t have the mental and emotional ability to actually have their anti-American ideas challenged in a public setting.  They talk big and bad when everyone around them is supporting them, using them, and controlling them, but when people challenge them to public debate of the ideas they are espousing, they run as fast as they can.

The latest example of this is Cameron Kasky, a student at Stoneman Douglas High School in Parkland, Florida and activist promoting pro-gun control at March for Our Lives, was challenged by his classmate Kyle Kashuv, who is also attends the same high school to a debate on the Second Amendment.

A video promoted by the National Rifle Association featured NRA spokesperson Colin Noir, who praised the actions of Blaine Gaskill, a school resource officer who shot and killed a student who was firing on fellow student in Maryland earlier this month.

“To all the kids from Parkland getting ready to use your First Amendment to attack everyone else’s Second Amendment at your march on Saturday, I wish a hero like Blaine Gaskill had been at Marjory Douglas High School last month because your classmates would still be alive and no one would know your names, because the media would have completely and utterly ignored your story, the way they ignored his,” Noir said.

Obviously, this was a little poke at the children who have taken the opportunity of their dead classmates to get into the limelight and promote themselves, kids such as David Hogg, Emma Gonzalez, Kasky and several others.

They seem to adore the attention.  We often call such people attention whores, for that they are, whoring themselves out against the Constitution and our God-given rights while drinking in their 15 minutes of fame as they are being controlled and used against America and her foundations.

In response to the video, Kasky told “Fox News Sunday,” “I think that’s the most pathetic thing I’ve seen out of this… And that’s the NRA — you’ll notice, they can’t attack our argument, so they’re attacking us personally. The fact that they’re saying all we want out of this is for people to know our names. They have no idea how much each of us would give for it to be February 13th again.”

Sadly, he doesn’t know what he’s talking about.  Their arguments are incredibly easy to dismantle.  I and others have taken their arguments and torn them to shreds based on facts and law, not raw emotion, which is what they are promoting.

However, a Kasky’s fellow student challenged him to a debate in which he said, “No personal insults allowed here,” and Kasky accepted, saying that they would set up a debate in the near future.

We’ll set up a debate in the near future.

However, Kasky backed out of the debate on Monday, claiming that Kashuv had made a personal attack on a family member of a shooting victim.

“Kyle, I’ve enjoyed my discussion about gun laws with you so far, but after seeing this, I think I’m out. For personal reasons. I disagree on certain policies with some family members of some victims, but I never go after them, especially not like this. This is low,” he tweeted.

But look at what he referenced.

Kyle, I’ve enjoyed my discussion about gun laws with you so far, but after seeing this, I think I’m out. For personal reasons.

I disagree on certain policies with some family members of some victims, but I never go after them, especially not like this.

That’s not a personal attack.  It’s at the heart of the issue!  See?  These children simply cannot be confronted with law, logic and facts, and grown ups continuing to applaud them aren’t doing them any favors.

They don’t want to submit to authority and they apparently don’t have a high morality to say and do some of the things they do, as Kentucky Governor Mark Bevin pointed out earlier this year after a school shooting took place in his state.

“As I have told you privately and via DM, I honestly didn’t see the name when I was replying. It came up on my timeline and I responded. I would NEVER EVER have said it had I seen the name. It was wrong of me and I feel like absolute garbage from it. I send my sincerest apologies,” he responded to Kasky.

Now, why he apologized, I have no idea.  To ask a legitimate question is perfectly reasonable.  Guttenberg was demonstrating the hypocrisy that abounds in this debate.  These kids want their rights, but want everyone else’s rights infringed on.  While I think the clear backpacks won’t help anything, it is just evidence of how government is ready to step in to make people “feel” safe but not actually provide security while controlling their behavior.  I mean Nikolas Cruz didn’t have a backpack, he arrived with a duffle bag for goodness sakes!

But hey, when it comes to personal attacks, all of these anti-Second Amendment kids are right out in front.

Remember the reference to NRA spokesperson Dana Loesche that she was a murderer, and that little Communist Emma Gonzalez could take care of her children better than she could?

How about similar comments against Senator Marco Rubio (R-FL) in the same fake CNN townhall meeting?

Or what about Kasky’s own comments directed at Florida Governor Rick Scott and Rubio that they “allowed this to happen.”

“It’s Rick Scott and Marco Rubio who allowed this to happen,” he said. “They’re enablers, and they — the blood of 17 people and all those injured and all the families that have been hurt — this is all them.”

Those are personal attacks, and while I have no problem in directing personal attacks against those in Broward County and the FBI who dropped the ball on Nikolad Cruz, those attacks are based on facts, not fictitious emotionalism.

So, Kasky is out, but that hasn’t stopped Kushuv from pursuing honest discussion in an open forum, and he recently challenged foul-mouthed March for Our Lives Communist David Hogg to debate.

Kyle, you’re wasting your time, brother.  They are doing this in the same manner that CNN treated you.  They want to try and control the narrative.

Remember, after Hogg launched all his personal attacks, including outright lying about Infowars founder Alex Jones, that when Alex invited him on to debate the issue, Hogg smugly told him he wasn’t going to do a debate and then offered more personal attacks.

This is how Communists and the criminally-minded, often one in the same, work.  They attack you like good little Saul Alinsky

disciples and then they hypocritically run for the bushes when you call them out.  They are like the schoolyard bully that continues to bully until someone stands up to them.  Then, they are ultimately humbled, only with these Parkland Communists, there is no humility.

They cannot take fair criticism of their words and actions, and so it takes young men like Kashuv and Marines like Joe Newby to rebuke them and tell them to grow up and deal with criticism as an adult or shut up.

Unlike President Trump said about them taking to the streets of DC and calling them “courageous,” they don’t seem to muster the courage to actually confront someone who will actually put them in their place with facts.

As for Kashuv, I do applaud your mannerisms and appreciate so much a young man who is surrounded in a sea of Communism in Broward County standing up and being heard.  You are an inspiration to many of us!  Thank you!