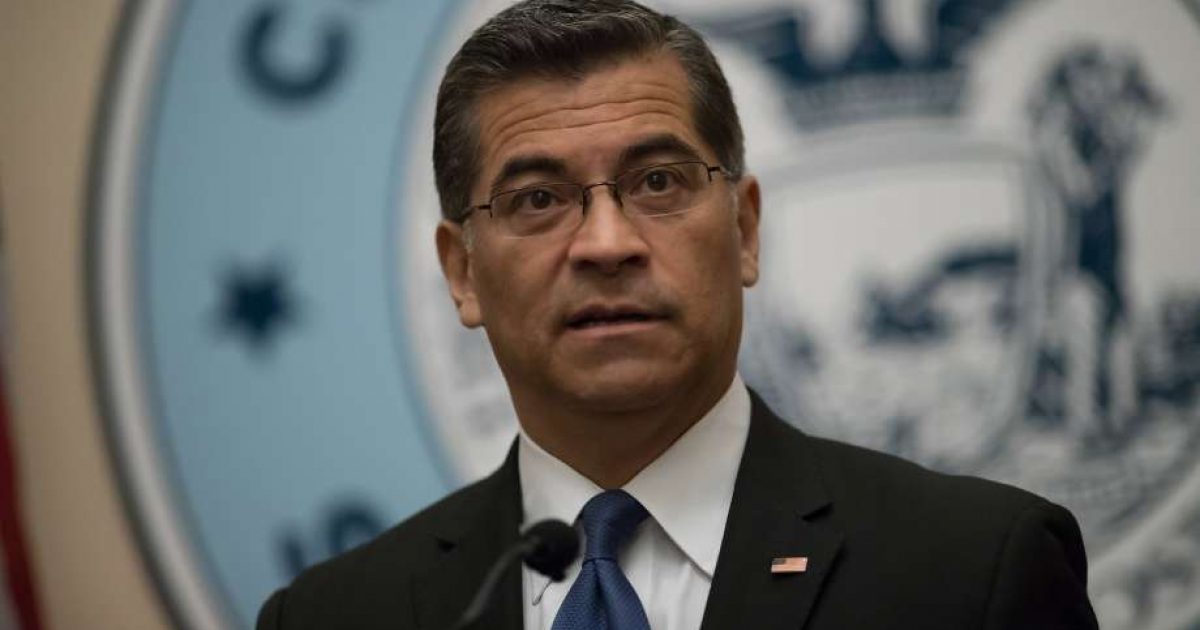 We see him on television

Becerra was born in California and graduated from Stanford Law School in 1984. During his time at Stanford Becerra was a member of MEChA, now one has to wonder just what is the MEChA? Well, this is a radical Chicano student organization with the ideas that the Southwest United States still belongs to Mexico. Aztlan refers to California, Arizona, Texas, New Mexico and parts of Nevada, Utah, and Colorado, that had LEGALLY ceded to the United States in 1848 with the signing of the Treaty of Guadalupe de Hidalgo. But this group of Chicanos still believe the United States stole this land from the Mexicans and they want it back.

Becerra seems to have alternative motives for what he does and his association with the MEChA would indicate just what his long-term intentions are. During his elections to Congress in 1996, Becerra was endorsed by Democratic Socialists of America. Yes, the Democratic Socialists of America, a group that has many members well known in the House of Representatives and a few silent members in the Senate with the most outspoken being none other than Bernie Sanders.   Becerra’s association with this group places him in the same ideology as the Socialists, but his association with this group is just the beginning.

“In October 2002 Becerra supported the Chicano Coalition for Peace and Social Justice, a group that had been infiltrated by the Communist Party USA. In 2005 he joined Raul Grijalva and Luis Gutierrez in backing the efforts of Latinos for Peace, an anti-Iraq War front group for the Communist Party USA. That same year, Becerra co-sponsored Rep. John Conyers‘s HR 676, a bill calling for the creation of a government-run, “single-payer” healthcare system.”

Here we see that Becerra has ties to the Communist Party USA through the groups he supports. That sure does show a great feeling of patriotism to the United States, or does it? If you check out John Conyers, you may well find even more connections to the Communist Party. Just how could this California State Attorney General have the belief of the United States in his heart with these connections? Why does Becerra have these affiliations and why should it be a matter of concern? If Becerra supports groups associated with the Communist Party, how could he keep his oath of office? Yes, this man has some serious concerns with these associations.

Just what is Campaign for America’s Future? Briefly stating their ideology:

Describing itself as “the strategy center for the progressive movement,” the Campaign for America’s Future (CAF) is a nonprofit organization that works to “expose the conservative agenda that has made things worse” for millions of U.S. residents. Specifically, says CAF, an “era of conservative failure” has brought about “a destabilized Middle East and Asia, the persistent threat of terrorism, a menacing climate crisis, an insecure and dwindling energy supply, unprecedented trade deficits, unchecked global corporate power, [a] broken health care system, a weakened pension system, and an increasingly inaccessible higher education system.” As a result, “Americans have had it with tired conservative politics that divide us, an economy that squeezes us, a foreign policy that weakens us, and a government that serves few of us.”

This clearly shows that this group openly practice the Saul Alinsky approach, “Blame others for what you do.” Keep telling the lies until those with weak minds believe it is the truth when the very ones making the statements are the ones doing what they blame others for doing.   That is just what Becerra does day after day. He says the United States is guilty of all sorts of things while it is he who does just that because he believes the United States stole what belonged to Mexico. We also have to look at the “Progressive” approach to this as it will show a lot of the Socialistic ideology that has become the Democratic Party. We can make that statement because of what a Socialist stated in 1944.

“Norman Thomas, the six-time Socialist Party candidate for U.S. President, said the following in a 1944 speech:

Today, the people of the United States allow the likes of Xavier Becerra to spew forth all he can under the guise of being a Democrat when in reality, he is a Socialist wishing to destroy the United States and give California and the other states to Mexico. However, few people ever knew all this about Becerra, because he made sure those who wish to destroy our nation from within covered him. This is real and not some crazy theory. Becerra is just a means to achieve the ends of the destruction of the United States. Let us continue with more of Becerra’s background.

“In early 2013, Becerra was one of a number of prominent leftists who urged President Obama to award, posthumously, the Presidential Medal of Freedom to the late Fred Ross Sr., a Saul Alinsky-trained radical who mentored both Cesar Chavez and Dolores Huerta. To view a list of others who also exhorted Obama to honor Ross, click here.”

Here one name stands out more than any other, Saul Alinsky.  Although it shows that Becerra wanted Fred Ross Sr., it has to be pointed out that Obama studied Saul Alinsky and his Communist ideology.  So, this is yet another connection to the Communist people or organizations. Xavier Becerra has deep connections with both the Socialists and the Communists. He hides these connections so that he cannot be seen as having deep connections. But Becerra did not go very deep cover because during his entire time in the House of Representatives, he was a very proud member of the Congressional Progressive Caucus. Now, one has to ask what is the Congressional Progressive Caucus?

We will show but a small part of this very far left leaning, Socialist/Communist group. Xavier Becerra was a very proud member of this Socialist ideological group. Let us show what this Group really is and what they wish to do.

“The Congressional Progressive Caucus (CPC) was founded in 1991 by Bernie Sanders, a self-identified socialist who had recently been elected to the U.S. House of Representatives. Sanders’ CPC co-founders included House members Ron Dellums, Lane Evans, Thomas Andrews, Peter DeFazio, and Maxine Waters. The Institute for Policy Studies (IPS) was also involved in CPC’s founding and in Caucus activities thereafter; IPS continues to advise CPC on various matters to this day.

Another key player in establishing CPC was the Democratic Socialists of America(DSA), which has maintained a close alliance with the Caucus ever since. In 1997, DSA’s political director, Chris Riddiough, organized a meeting with CPC leaders to discuss how the two groups might be able to “unite our forces on a common agenda.” Among those who participated in the meeting were Bernie Sanders, labor leader Richard Trumka, professor Noam Chomsky, feminist Patricia Ireland, Rev. Jesse Jackson, Senator Paul Wellstone, journalist William Greider, and the socialist author Barbara Ehrenreich.

Beginning in 1997, CPC worked closely with the newly launched “Progressive Challenge, a coalition of more than 100 leftist organizations that sought to unite their activities and objectives under a “multi-issue progressive agenda.” To view a list of many of the major groups that co-sponsored the Progressive Challenge, click here.

Today, we see Becerra filing suit against the United States because the census wants to include the question of whether or not one is a citizen. This should be on all forms. Those who come to the United States illegally do NOT have any rights and they should not be included on our census since the census is designed to find out how many  citizens are in the nation and if it were to allow the illegals to be counted, it would not be constitutionally correct because the illegal people would be included even though they have no right to be counted or to be in our nation.  However, we have an Attorney General for California with a background that has very questionable association to groups of either Socialists or Communists, with an ideology that does not align with the principles of the United States, who is demanding that people with no right to be in our nation be allowed to not confess whether or not they are legally here or not on the census form. Maybe we should count our dogs, the birds that fly into our yards as Citizens.  It would make about as much sense.

Xavier Becerra is not the honest Attorney General of California.  He is a man with a Socialist alignment that is working to destroy the United States and turn the Southwestern states into a Mexican nation. He has the background well hidden with all then little ideologies of the Socialists and his ideas that the United States should give those state it obtained legally back to Mexico. As we have seen illustrated above, many of the groups associated with Xavier Becerra and others do not have the patriotic ideas or blood flowing through their veins. They do not want any conservative to succeed or allow the United States to continue under the Constitution. They seek to begin destroying the Constitution with the Second Amendment first, which will allow for the Socialists and Communists to join forces and eliminate the Constitution because it was written in the 1700s.

Xavier Becerra is not what he may make some people believe.  He is a wolf in sheep’s clothing and when he gets what he wants.  He will remove the sheep’s clothing and devour our nation like a locust attack. We have to look into these people’s backgrounds to see where they have been, the groups they are associated with, and what they really believe. When we peel back those curtains, we will see those who yell the most are the ones that do not want what we grew up in and do not want the Constitution we now live by. We, as citizens, and not the illegal criminal aliens, should never accept what people like Xavier Becerra layout before us because they do not have the United States in their heart or blood.