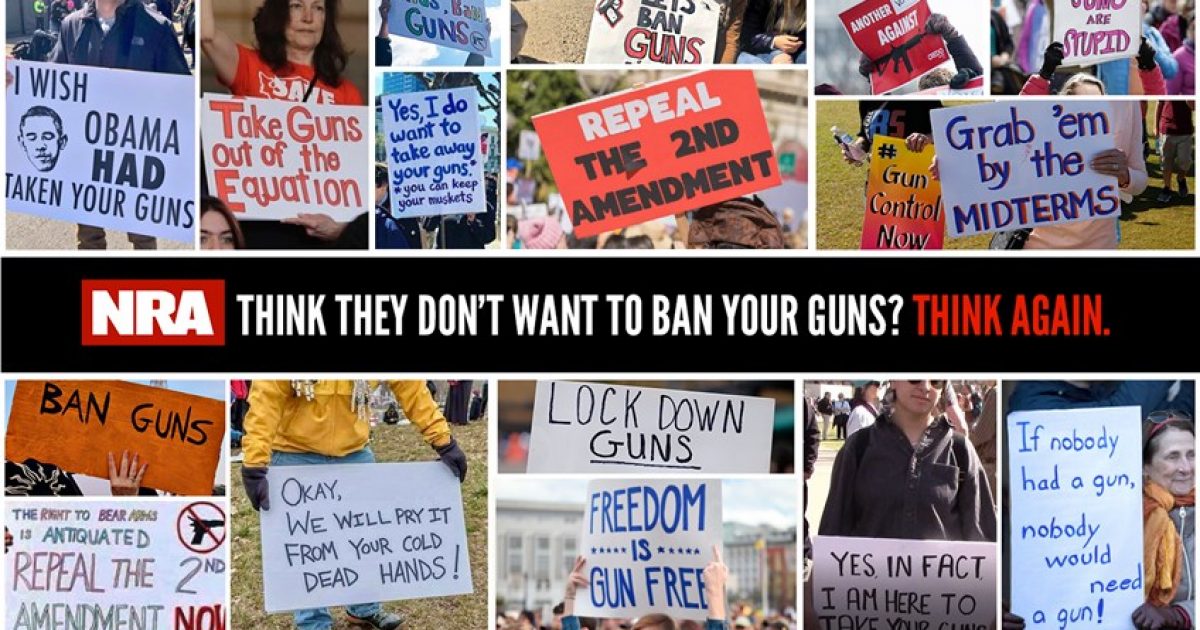 The reason for the Second Amendment was put into place was to ensure the right of the people to keep and bear arms was not infringed so that they might participate in a well-regulated militia and avoid having a standing army.  Of course, this was a duty of all able-bodied men but was based on the God-given right that men were given by their Creator to defend against criminals, namely tyrants.

The National Rifle Association agrees and its Institute for Legislative Action arm has come out and not only reiterated this notion, but has said that those who are telling Americans that no one is coming for their guns are lying to them.

The NRA-ILA wrote, “Why do we even have a Second Amendment?  Because British tyrants came for the Founders’ guns, and the Founders knew, given the chance, overreaching officials in the U.S. would do the same thing.  Now, some believe that chance has finally come.”

“In the wake of the terrible crimes in Parkland, Florida, gun control activists and progressive social justice warriors have found their scapegoats in the National Rifle Association and its five million members. And as they always do when they feel emboldened, they are revealing the true agenda they usually try to downplay to the American public in less emotionally-charged times.”

As I’ve stated before, these people attack our rights while whining when their own rights are infringed.

However, the NRA-ILA doesn’t just make a claim and not back it up.  Among some of the statements by anti-Second Amendment activists last weekend in DC at March for Our Lives, here are a few the NRA-ILA noted.

“When they give us that inch … we will take a mile!”

“I have a dream that enough is enough. And that this should be a gun-free world. Period!”

While these statements were uttered, there is something that should be pointed out in the first statement that was listed.  Those little ellipses were put in there for a specific reason.  The quote was actually from Parkland student Delany Tarr who uttered:

“When they give us that inch, that bump stock ban, we will take a mile.”

This is important because the NRA has already tipped their hand on bump stocks and apparently support more unconstitutional regulations on bump stocks despite the fact you can bump fire without a bump stock, but they have a history of compromising on the Second Amendment.  The NRA’s Wayne LaPierre and Chris Cox issued a joint statement after the October 1, 2017 mass shooting in Las Vegas.  Here’s what they wrote.

“In the aftermath of the evil and senseless attack in Las Vegas, the American people are looking for answers as to how future tragedies can be prevented.  Unfortunately, the first response from some politicians has been to call for more gun control.  Banning guns from law-abiding Americans based on the criminal act of a madman will do nothing to prevent future attacks.  This is a fact that has been proven time and again in countries across the world.  In Las Vegas, reports indicate that certain devices were used to modify the firearms involved. Despite the fact that the Obama administration approved the sale of bump fire stocks on at least two occasions, the National Rifle Association is calling on the Bureau of Alcohol, Tobacco, Firearms and Explosives (BATFE) to immediately review whether these devices comply with federal law.  The NRA believes that devices designed to allow semi-automatic rifles to function like fully-automatic rifles should be subject to additional regulations.  In an increasingly dangerous world, the NRA remains focused on our mission: strengthening Americans’ Second Amendment freedom to defend themselves, their families and their communities.  To that end, on behalf of our five million members across the country, we urge Congress to pass National Right-to-Carry reciprocity, which will allow law-abiding Americans to defend themselves and their families from acts of violence.”

Adding regulations or even banning bump stocks won’t stop these kinds of crimes anymore than the politicians calling for gun control will, NRA.  This is just an example of the compromise of the NRA and why I’m not longer a member because they say they want to strengthen the Second Amendment freedoms of Americans but then ask government to infringe on the rights of the people to have semi-automatic rifles with bump stocks.  And no. bump stocks do not “function like a fully-automatic rifles.”  They are far easier to control than a fully automatic weapon, far more accurate and continue to function as semi-automatic rifles, firing one shot with each pull of the trigger.

Still, for what the NRA-ILA is pointing out, their claim about coming for our guns is accurate, despite leaving that vital piece of the quote out.  I want to know if the NRA supports a ban of the bump stocks, not just regulating it because neither are authorized in our Constitution to Congress and no authorization is given to the Executive Branch to do it.

The NRA-ILA also pointed out that some of the placards that were carried around by anti-Second Amendment activists in DC last weekend included the following:

“Meanwhile signs using the universal circle and slash of prohibition targeted handguns, rifles, and the NRA itself,” the NRA-ILA wrote.  “Okay, so the protestors want to ban guns, they hate the NRA, and many enjoy profanity.  Trust us, we get the message.”

The NRA-ILA also reference the likes of former Supreme Court Justice John Paul Stevens who called for a repeal of the Second Amendment, which would be “closer to their objective than any other possible reform,” he said referring to the March for Our Lives crowd.

Additionally, some in the media attempted to engage in damage control as they realized just how apparent what they were actually advocating for had become.

For example, CNN’s Chris Cuomo, a man that doesn’t believe rights come from God but from the state, actually had the audacity to say that no one was calling for a repeal of the Second Amendment just days after his own network reported on former Justice Stevens’ call for that very thing.

“[N]o one calling for a 2A repeal,” insisted anti-gun media personality Chris Cuomo in a tweet the day after the Stevens editorial was published. “[S]top with the bogeymen.”

Yeah, echoed law professor and gun control advocate Adam Winkler, “There’s not a snowflakes chance in hell we are going to repeal the Second Amendment … . ” But then he added, “anytime soon.”

Politifact – the progressive advocacy organization posing as a “fact checker” – also tried to contain the damage. It handed out a “pants on fire” rating to the claim that legislation already pending in Congress which would expansively ban semi-automatic firearms does in fact prove “they are coming to take away our guns.”

Politifact, however, created a strawman by insisting, “Gun owners would not be required to give up any of their guns as long as they were legally purchased before the ban.”

But their analysis ignored the fact that many of America’s most popular firearms would no longer be available under the legislation, that parts for the banned firearms would also be banned, and that places which have enacted similar bans have repeatedly reneged on the original grandfather provisions. The pending legislation is also significantly broader than the federal “assault weapons” ban that was in effect from 1994 to 2004, displaying an obvious tendency toward gun control mission creep.

Of course, Politifact protects the criminally minded more than they do Constitutionalists.  Just look at how they handled Freedom Outpost here and here.

In the end, the NRA-ILA is doing nothing more than warning of the fact that when these anti-American gun grabbers say that no one is coming for your guns, the very opposite is true.