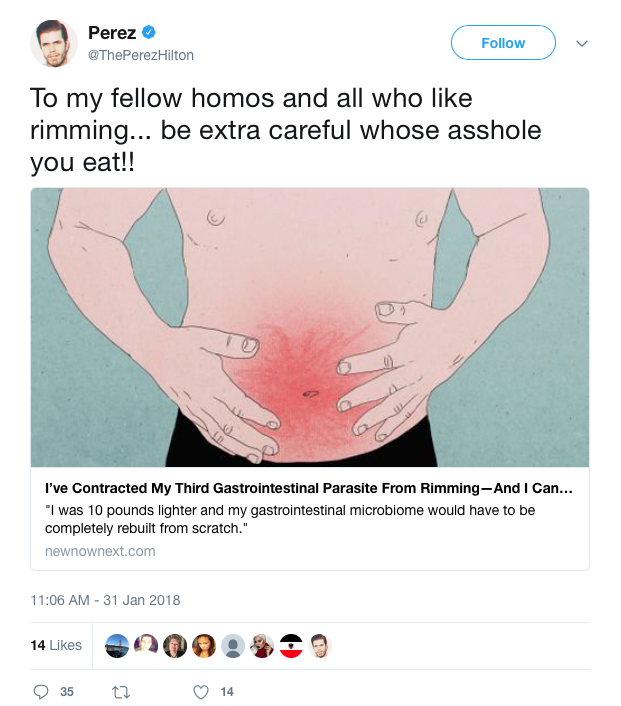 Not only did homosexuals misappropriate the rainbow as their logo — the rainbow that is God’s sign after the Noah great flood, as His promise that never again would He punish humanity with such a cataclysm — homosexuals also misappropriated the English word “gay,” which used to mean “happy“.

But the reality is the exact opposite: There is nothing “gay” or happy about homosexuals and their “life style”.

One of the unspoken things about homosexuality, because the Left have deemed it politically incorrect, are the many medical consequences of the sexual practices of homosexuals, especially “gay” men.

Why anyone would want to do that is beyond my comprehension.

Think you know everything about gay men’s sexual health? Think you’re in good hands with your gay doctor or LGBT health clinic? Think New York City’s Department of Health does a good job educating the gay community about how to stay healthy?

Note: Pre-exposure prophylaxis (PrEP) refers to the use of antiviral drugs to prevent HIV/AIDS.

Four years ago, I started experiencing awful diarrhea. My bowel movements would come out as a brown soupy mess. Everyone gets diarrhea, no big deal. But after a few weeks of terrible, horrible, no good, very bad diarrhea, I decided it was time to see a doctor. The physician’s assistant at my doctor’s office didn’t have any answers for me, but recommended a stool test so a lab could analyze my shit and see what was going on inside….

My results came back positive for giardia . . .

My PA prescribed me an antibiotic called metronidazole to wipe the giardia from my system….

Unfortunately, however, my gastrointestinal system was free not only from giardia, but also from all the “good” bacteria that makes up my microbiome, too. The gastrointestinal system uses good bacteria to digest food, regulate nutrients, protect against pathogens, and regulate body weight. Without this good bacteria, my body was unable to digest food properly and my poop was still a soupy mess.

My doctor instructed me to take probiotics (which I found in the refrigerated section of the health department at Whole Foods). It took several months of probiotic use for my bowel movements to return to normal, but at least my health was in the clear and I felt free to return to having sex without the risk of spreading the parasite.

Fast forward to the spring of 2017. PreP had recently ushered in the second sexual revolution and everyone was now fucking each other like it was 1979. My wonderful boyfriend and I enjoyed a healthy sex life inside and outside our open relationship. Then he started experiencing stomach problems: diarrhea, bloating, stomach aches, nausea….

[J]ust a few months later, summer of 2017, my boyfriend started experiencing another bout of diarrhea and stomach cramps…. This time the results came back positive for entamoeba histolytica….

Entamoeba histolytica, as it turns out, is another parasite common in developing countries spread through contaminated drinking water, poor hygiene when handling food, and…rimming….

My gastrointestinal system had a severe reaction to it [paromomycin], turning every ounce of food I ate immediately into liquid. It was like a fucking magic trick. I spent the next week running to the bathroom several times a day to shit my brains out. By the end of the treatment, I was 10 pounds lighter and my gastrointestinal microbiome would have to be completely rebuilt from scratch. That meant lots and lots of probiotics….

Fast forward to November 2017 and it started all over again. I started shitting my brains out…. It was giardia….

I don’t know how many of you out there have sexually contracted a gastrointestinal parasite, but I do know our health care providers and departments of health are failing when it comes to keeping us informed about this issue.

The friends I’ve told about giardia and entamoeba histolytica all have the same response, “What is that?!” They are blissfully ignorant of either parasite, while engaging in the same sexual acts that put them at risk of contracting them….

[A]sk your doctor about how your sexual practices may put you at risk of contracting a gastrointestinal parasite.

Tell your friends about this gross story you read on the internet. And maybe, just maybe, think twice before you chow down on another dude’s ass.