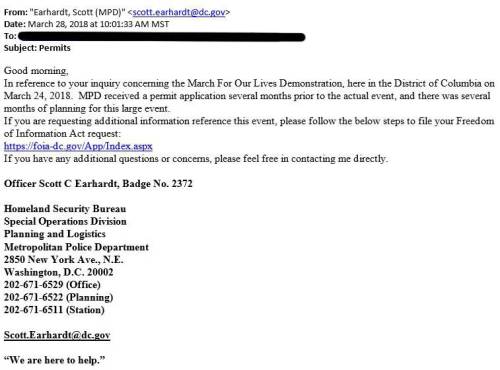 First and foremost, I want everyone to know that I am not saying that the Parkland Shooting was not a real tragedy.

When some people hear the term “false flag” they immediately shut down and feel that the “tin foil hat” guys are at it again. I am not contending that this was not a real shooting, nor that real people did not die on February14, 2018.

However, I recently stumbled upon a piece of evidence, supplied directly from a D.C. cop, that makes me believe, with 99.9% certainty, that this shooting was a false flag event designed to further destroy the 2nd amendment. I never believe anything 100%. I am a truth seeker and try to keep an open mind.

I would ask you to keep an open mind as well, because the information I am about to show you might do more than challenge your beliefs. It might shake you to the very core.

What if I told you that the “March for Our Lives” demonstration, which happened on March 24, 2018 was approved for a permit several months before it happened? 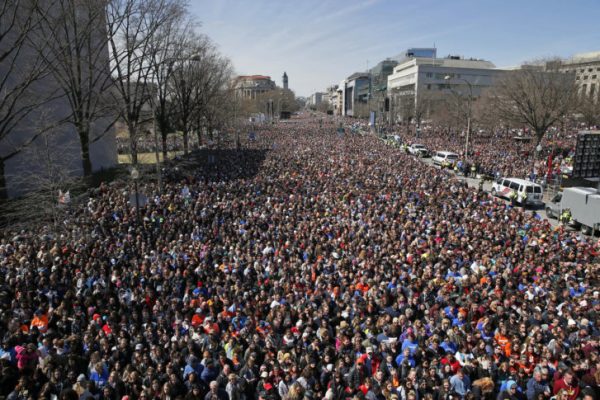 What if this demonstration was granted a permit long before the Parkland Shooting happened?

Would that cause you to question the current media narrative, and possibly your own beliefs?

Let’s look at a screenshot of an email from Scott Earhardt of the D.C. Metro Police:

The email clearly states that the permit application for the “March For Our Lives Demonstration” was approved several months in advance. How can this be?

The demonstration happened less than 6 weeks after the shooting. So how did they know that there would be a shooting that gave them a reason to demonstrate, before that shooting ever happened?

Here is some research and background information from my friend Dr. Eowyn at Fellowship of the Minds:

Public demonstrations, especially those that are large-scale like March For Our Lives, require a permit from the police department of the city in which the demonstration will take place.

Dammegard received this email from Officer Scott C. Earhardt of the Homeland Security Bureau of the Metropolitan Police Department:

In reference to your inquiry concerning the March For Our Lives Demonstration, here in the District of Columbia on March 24, 2018. MPD received a permit application several months prior to the actual event, and there was several months of planning for this large event.

If your are requesting additional information reference this event, please follow the below steps to file your Freedom of Information Act request:

If your have any additional question sor concerns, please feel free in contacting me directly.

Below is a screenshot of the email (source: Professor James Fetzer):

According to the PDF document, Metropolitan Police Department, Washington.D.C., Scott Earhardt indeed is a detective there. Here’s a screenshot I took from page 6 of the 65-page document:

Here are some facts:

This information is breaking from multiple websites on this Easter weekend. Some are already saying that the email is a forgery. How will this be spun by the mainstream media?

Will they say that Earhardt made a mistake in his reply?

Will they discredit source of the email?

What media surprises and spins await?

More than likely they won’t even acknowledge that this email ever existed and keep parading David and Emma out in front of you. Most people will never see this story at all because of the extreme censorship put on websites that challenge the mainstream narrative.

My job is to push the truth, as I see it, and not worry about those who are going to feast on everything that mainstream media feeds them.

Yes America your government is so corrupt that they will allow (or maybe even plan for) your fellow Americans to die, IF it gets them closer to their agenda.

They want your guns. Every right that they take from you brings them one step closer to total power.  So whenever you respond to tragedies like this by joining the chorus of those who demand gun confiscations,  armed teachers, or more controls and restrictions on the 2nd amendment, you are doing exactly what they want you to do.

Stop falling for the smoke and mirrors and seek the truth.

The truth is the only thing that can save America from our corrupt political masters.

They don’t want to represent you. They seek to rule you.

That’s the sad but honest truth.

***Please feel free to reprint this article, or portions of it, in any format. This article first appeared at D.C. Clothesline.