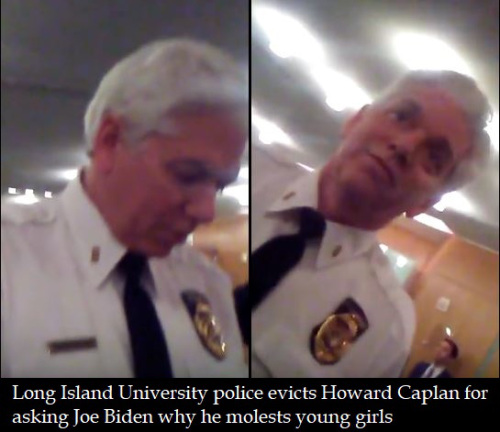 Biden engaged in a “conversation” with former Congressman Steve Israel (D-NY), who is Chairman of LIU’s Global Institute.

A brave man in the audience stood up and confronted Biden, asking:

Someone in the audience yells, “Get out of here.”

To jeers from the audience, the man asks Biden, “Do you deny it?”

Addressing the audience, the man says, “Just look it up on YouTube! Molesting children. Right on YouTube. Look it up! Look it up!”

As he’s led away by security guards, the man yells to Biden: “You’re a pedophile!”

Led outside the Center for the Performing Arts, a campus police officer grills the man, demanding to know his name and see his driver’s license.

The officer demands to see Howard’s ID, where he lives (Philadelphia), how he “got here,” and whether he has a car there. Caplan says no, and that he took public transportation (Long Island railroad).

Caplan asks the officer if he’s seen the video (of Biden groping young girls). The officer replies, “I’m not interested in that.”

The officer looks at Howard’s ID, then says, “We’ll have somebody drive you to the bus stop to the train station.”

This is one of the videos on YouTube showing Biden, at the Senate swearing in ceremony, repeatedly groping young girls. The girls display their discomfort at being groped.

And here’s a GIF of then-Senator Jeff Sessions swatting Biden’s hand away from a young girl (Sessions’ granddaughter?).