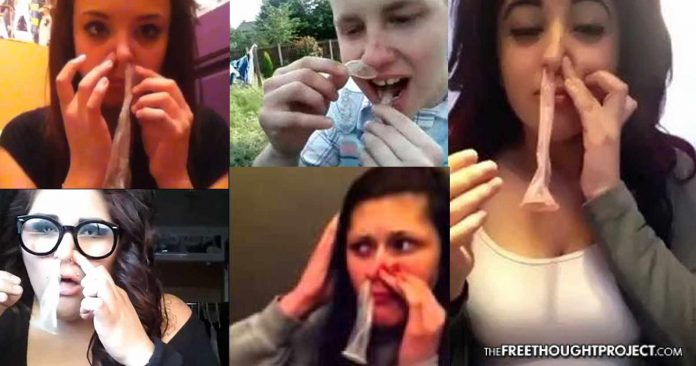 If the trend of kids eating Tide Pods was not disturbing enough, a new social media challenge has teens snorting condoms. The exact origin of this trend is unknown, but in recent weeks teens across the country have been snorting condoms and putting the footage on YouTube to catch their 15 minutes of fame—or perhaps 15 minutes of shame.

The search term “Condom Challenge” will bring up more than 279,000 results on YouTube, most of which show young people performing this gross and dangerous trick.

In the stunt, a teen takes a condom up one nostril and attempt to pull it out of their mouth or out of the other nostril. This is actually a trick that has been performed by professionals in sideshows for generations. However, none of these kids are professionals and many of them are getting sick and risking permanent damage to their bodies.

In a recent column for Forbes, Bruce Y. Lee, a Johns Hopkins professor said, “anything else that goes up your nose can damage the sensitive inner lining of your nose, cause an allergic reaction, or result in an infection.”

Doctor Carol Cooper told The Sun that this stunt could even kill someone.

“The nose is connected to the back of the mouth—it’s also connected to the airwaves. There’s every possibility something you push up your nose will end up in your windpipe, or in your lungs. With potentially fatal results,” Cooper explained.

Why are so many kids doing something so pointless and dangerous? Experts say that it is tied to seeking attention and approval on social media.

“Because these days our teens are doing everything for likes, views, and subscribers. As graphic as it is, we have to show parents because teens are going online looking for challenges and recreating them,”Stephen Enriquez, a state education specialist, told KPMH News.

The apocalypse is here.

These dangerous online trends are an indication that there is something very wrong with the psychology of young people in modern society. It is obvious to anyone, even children much younger than these teens, that eating Tide Pods and snorting condoms is dangerous—but they don’t seem to care.

It is almost as if these people have a death wish, or that they have no concern for their lives or health. However, it seems to be much more complicated than that. It is not that these kids actually want to die, it simply appears that they value the attention they get on social media far more than they value their health and their futures.

Zooming out a bit and looking at the bigger picture, it is easy to see this same mentality come into play in the case of teenagers who act out in more extreme ways. The darkest example of this mindset can be seen in the school shooting phenomenon, where perpetrators of these acts of violence actually look forward to the media attention that they receive in the aftermath of their attacks — even if they’re not alive to see it.

Last week, it was reported that the suspected gunman in the Parkland shooting, who shall remain nameless, has been receiving a disturbing amount of fan mail from behind bars—including sexual photos from female fans. For someone who spends their entire life ridiculed and ignored, as many teens do, this type of attention can be something very attractive for a young and impressionable person who has not yet learned how to manage their own emotions.

This is why it is no surprise that there are typically dozens of attempted copycats, or threats thereof, after a high profile school shooting. Confused and disturbed teens end up seeking the attention that they see others receive through traditional and social media.

Although these twisted social media challenges are far less of a concern than school shootings, both seem to be a sign of how teens are developing psychologically in an age where self-worth is measured by likes, clicks and digital friends.