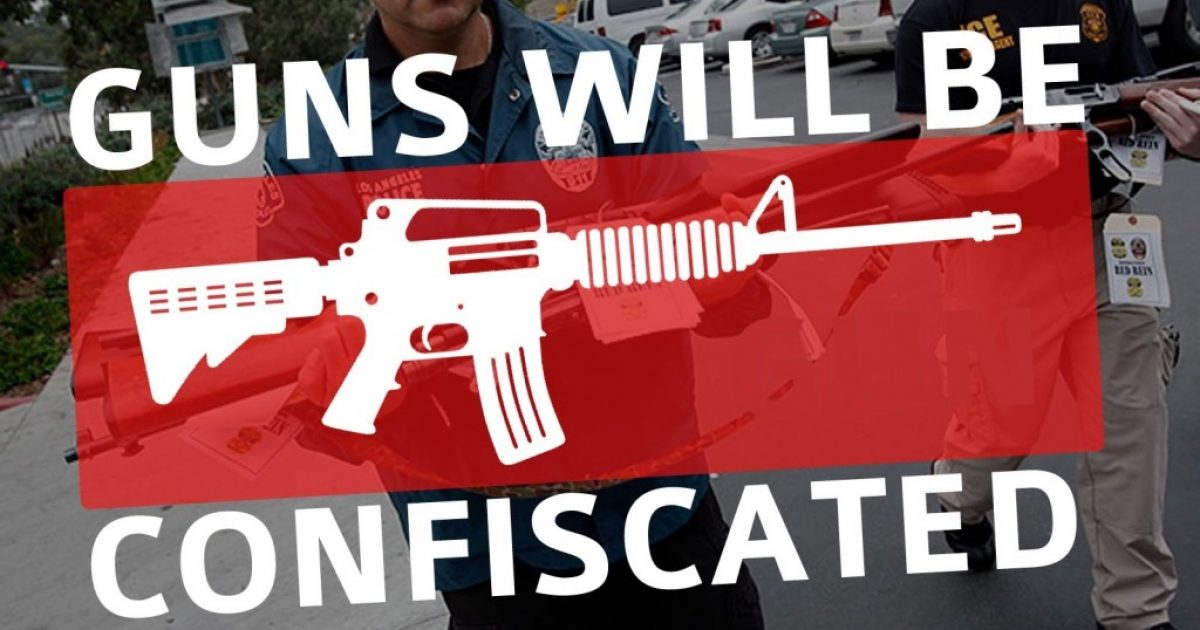 There are at least five reasons we know that the push is not for “common sense” gun laws, as anti-Constitutionalists and emotionally controlled high school student proclaim, but is for total gun confiscation.

In a recent article by Rachel Blevins at The Free Thought Project in which she pointed out many of the students marching for gun rights apparently didn’t have much of a problem with an increased police state.  Yes, that’s not a typo.  These were student marching FOR the rights of gun owners, but also promoting the increase of police officers, which is a growth of government.

For more on that topic, I’d refer you to the articles by Rutherford Institute attorney John Whitehead of an excellent article by Daniel Greenfield titled Our State of Police.

At the end of Blevins’ article, she also posted a brief video on five reasons we should consider that the current anti-Second Amendment activists are not seeking more gun control laws, but are, in fact, promoting gun confiscation and a total ban on arms in the united States.

The video is mixed with the rhetoric of David Hogg’s cult group of useful idiots at the DC March for Our Lives and various interviews in which they are telling America exactly what their handlers want them to say, as well as movie clips that mock their stupid statements and lies.  Remember, these are kids that have been given scripts to present to the media and cannot actually engage in debate with someone who holds a pro-Constitution, pro-Second Amendment position, which is opposite of their own.

However, the words they are presenting are those of the Communists in our country along with the media’s own efforts to disarm the American public while ignoring the law and history.

The 5 reason we know they are coming for our guns are:

While the leaders of the movement claim that the “don’t want to ban guns” and just want sensible gun laws, that has all changed to calling for Nazi-style gun confiscation and bans.

Many, even professed Constitutionalists and conservatives, were just fine with raising the age to purchase rifles and banning bump stocks, the kids are telling you when you give in to that, they’re going to take a lot more because you allowed them to set a precedence, an unconstitutional precedence at that.

The answers these kids give to what should be done concerning gun owner rights is the typical anti-American, Communist lines of “ban assault rifles,” “citizens don’t need ‘weapons of war'” and other common phrases by the same handlers that are feeding them the scripted lines.  I mean seriously, does anyone think these kids even know what a semi-automatic rifle is?  Probably not.  do they even know that AR-15s are not used in actual combat in the military when engaged in war?  Probably not.

Whether or not you believe the kids want to ban guns or not, despite them coming right out and saying it, is irrelevant because this is the narrative that the corporate CIA-controlled media is peddling to the dumbed down American population.

In fact, it’s so clear that the media is both pushing for a repeal of the Second Amendment by presenting former Supreme Court Justice John Paul Stevens’ call for a repeal and both by trying to soften the blow by allowing Communists like Chris Cuomo, a man who doesn’t believe rights come from our Creator but from government, to openly say no one is calling for a repeal of the Second Amendment.  Cuomo’s own network reported on Justice Stevens’ calls for such a repeal.

And while you listen to some of the useful idiot airheads spewing this garbage in the video above and in the daily news cycle, the reality is that should that time ever come, they will be the first to have their rights stripped and not be able to speak out against anything and if they do, they’ll be summarily shot dead.  Oh, the irony, and it’s simply because they have not learned from history.  Primarily, they haven’t learned from their forefathers nor the last century in which governments disarmed their people only to come in later and murder them by the hundreds of millions.

If you are one that doesn’t believe the media’s propaganda is working in conjunction with an illegal and corrupt public school system that has dumbed down the up and coming generation to the point that they have no idea what the founding fathers of our country even meant when they wrote the Second Amendment, where rights come from as described in the Declaration of Indpendence or anything else in the Constitution, then you should consider that people actually applaud when a Democrat candidate for sheriff in North Carolina actually uttered that it was OK to pry the guns from the cold dead hands of gun owners, and by that, the implication was to kill them to confiscate their arms.

But it’s not just people running for office. A new Quinnipiac poll released Tuesday found that two-thirds of American voters support stricter gun laws, reaching the highest level in the poll’s history.  Take a look at that polling and see how things have changed drastically in the past 20 years.  Fortunately, we are not a democracy that is ruled by the emotions of a childish mob, but a republic under the rule of law.

The March for Our Lives is a sideshow of WWE.  Like its counterpart of politicians in DC, March for Our Lives is not born of genuine concern, but rather an agenda, and as with every anti-gun cry, it’s funded by the usual suspects.  People like Michael Bloomberg and George Soros are behind the money that supports the movement.  Ironically, baby murderers Planned Parenthood, an organization that actually murders children unlike the National Rifle Association, also throws in some of Americans’ tax dollars that it is unconstitutionally given by your corrupt representatives, including President Donald Trump.

As an “astroturfed” movement, March for Our Lives is meant to appear as a grassroots movement, but it’s all funded and orchestrated by outsiders.  The march in DC really was going nowhere.  It garnered just over 200,000 people and that included media and the whining children.

Additionally, Nazi-style gun laws are being promoted, even here in the deep South where I live by such people as Democrat Georgia Rep. Erica Thomas, who supported legislation to seize and take possession of semi-automatic guns, high capacity magazines and ammunition and yet, she says she doesn’t want to do it by force.  Talk about Orwellian doublespeak

And that’s just the tip of the iceberg.  We’re seeing another assault weapons ban being formed in DC, and around the country cities and states (New Jersey, Delaware, Vermont, Oregon and Florida) are banning bump stocks even though people can bump fire without a bump stock and pushing for more unconstitutional gun laws!  It’s going to get worse too.  And you believed President Trump when he told you that your Second Amendment rights were no longer under attack.  He’s been aiding in the attack!

There were some good comments in the final 40 seconds.  Kyle Kushuv, who is a Florida student and has been reasoned and rational voice in the  conversation, pointed out the irony of the failures of government, even in the Parkland shooting, and yet, says it is utterly ironic that people want to trust that same government, even more, when it comes to the rights of gun owners.  He’s right on!

We must continue to expose their lies and hypocrisy in order to win the day, and we must be very vocal about it!