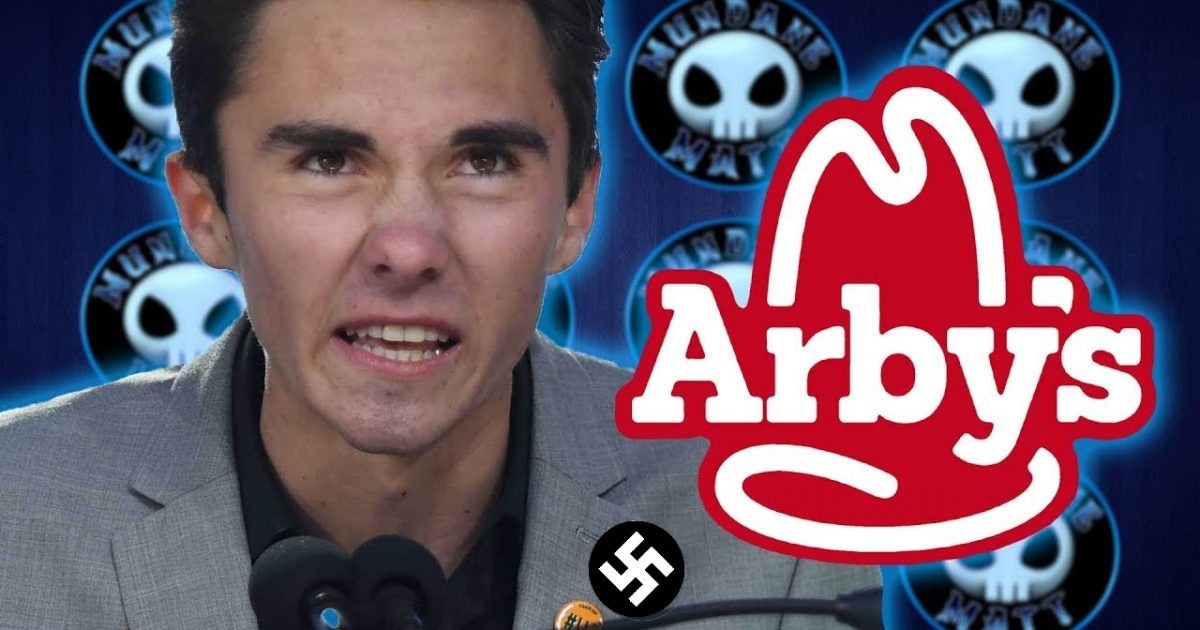 Who doesn’t love Arby’s roast beef sandwich?  Charlotta “ChaCha” Chihuahua, before she succumbed to congestive heart failure, absolutely loved Arby’s roast beef sandwiches.  But, not everyone loves Arby’s.  David Hogg and his anti-constitutional, anti-gun except in the hands of government, and anti-American cult does not because Arby’s advertises on the Fox News show, Ingraham Angle, with Laura Ingraham.  Because of the misunderstanding Hogg made with Ingraham’s tweet regarding his rejection from four California universities, Hogg launched a nationwide boycott of advertisers purchasing commercial time during her show;  the latest attack is against Arby’s who has not pulled their advertising from Ingraham’s show.

Despite Ingraham apologizing to Hogg (which was unnecessary because there was nothing to apologize for), Hogg has relentlessly called for boycotts of corporations advertising on her Fox News show after refusing to accept her apology.  According to The Daily Caller, Hogg is now seeking reparations from the fast food chain Arby’s.

In a series of tweets late Thursday evening hog [sic] went after Arby’s for their advertising on Ingraham’s show. Hogg went as far as to publish the private names and emails of executives at Arby’s to pressure them into pulling their advertisements.

Not surprisingly, the tweets have since been deleted, but Business Insider captured the tweet Hogg made.  One can bet Hogg did not get this information himself.  He’s too busy news media hopping.  Like good little cultists, several of Hogg’s followers joined him in the boycott and Shannon Coulter re-posted the email addresses of Arby’s executives from Hogg’s Twitter feed.  Coulter is co-founder of #Grab Your Wallet, a “movement that turns consumer power into a more respectful, inclusive world,” whatever that means.

Nothing Ingraham tweeted warranted an apology to Hogg, but she did apologize in the “spirit of Holy Week.”  Hogg refused to accept her apology and targeted advertisers on her Fox News show.  Why?

According to an editorial at The Daily Caller by Scott Greer, Hogg’s goal was not about fishing for an apology, it was about targeting Fox News.

The young activist benefits from his age in this pursuit. While wanting to be treated as a serious advocate in spite of numerous inflammatory statements, Hogg and his fellow student-activists always retreat to their age when criticized.

Yes, they are kids and it is dumb for prominent figures like Ingraham to make juvenile insults against them. But that doesn’t mean commentators can’t challenge their arguments on gun policy or call out their smears on the NRA and Republicans.

Hogg wants Fox to treat him and his friends only with adoration — just like the establishment media does. And now he has a friend in corporate America to punish his critics. [Emphasis mine]

“I think it’s great that corporate America is standing with me and my friends,” Hogg said on CNN Friday. “They cannot push us around, especially when all we’re trying to do here is save lives.”

Corporate America appears to agree with Hogg’s assessment that all his fellow gun control advocates are trying to do is “save lives” and will not broker any criticism.

First, Ingraham did nothing to warrant an apology to David Hogg since she re-tweeted an article about Hogg and his university rejections.  But, Hogg gets insulted and angry about everything, even when there is nothing to cause insult or anger.  The real issue is Hogg’s ego and arrogance.  Fox News is not rolling out the red carpet, agreeing with every word he says, worshipping him as some sort of Greek god, featuring him on shows daily, recognizing him as some expert on guns, gun control and gun confiscation, and in general, not showering him with praise as some hero for being on school grounds while the shooting occurred.  Because of Fox News’ supposed folly, Hogg targets their advertisers for a boycott by anti-constitutionalists, caring not whether those employed by those corporations will suffer the loss of employment because of decreased revenue.

It is not from the leftist boycott that these corporations will suffer – many corporate advertisers acquiesced to Hogg’s bullying tactics.  The real boycott will come from constitutionalists who refuse to use their services or products for supporting a cult, backed by big money criminals like George Soros, that calls for the infringement upon the God-given unalienable right to keep and bear arms for self-defense against a tyrannical government and criminals.  Besides, this cult is not about “saving lives.”  It is about the removal of rights from millions of innocent American citizens because of the actions of a few.  And, if several corporations’ low-level employees are harmed in the process, they could care less.

Corporate America appears to agree with Hogg’s assessment that all his fellow gun control advocates are trying to do is “save lives” and will not broker any criticism.

The effort against Ingraham is only the latest example of the Left weaponizing corporate power to stifle conservative viewpoints. Last month, activists were able to pressure companies to cut ties to the NRA. Now they’re trying to repeat their success against Fox News, and it appears to be working to some extent.

The most powerful tool left-wing activists have is corporate pressure. They can use it to overturn legislation, make their enemies unemployable and tilt the public discourse in their favor. This is an advantage exclusive to the Left — conservatives have been unsuccessful in convincing corporate America to take up their concerns.

The March For Our Lives folks are smart enough to realize this advantage and exploit it to maximum effect. It’s hard to promote your viewpoint when it comes at the price of your revenue stream.

Greer concedes that it is unlikely these corporations will lose revenue if continuing to advertise on Fox News, but these corporations do not want to be seen by the anti-constitutionalist as supporting “bad people.”  So, these corporations cave to the demands as a punitive measure against media personalities who exercise of freedom of speech.  However, this could backfire, just as Target discovered, resulting in loss of corporate revenue and many front-line employees losing their jobs.

Greer made other excellent observations.

Fox will hopefully hold its ground and stand by its host. Axing her show would open up all of their hosts to the same kind of economic intimidation. A punitive action against Ingraham would only show blood in the water to its adversaries.

The Left knows it can count on corporations to do its bidding when called upon — and it’s going to be more frequently used against the Right in the years to come. It’s time for conservatives to acknowledge this problem and let corporate America know it can’t turn into the enforcer of progressivism. [Emphasis mine]

As far as Arby’s Fast Food Chain goes, here’s a tidbit for the corporate executives.

Sirs, I have always loved your roast beef sandwiches and curly fries, along with many other items on your menu.  When my beloved four-legged companion was alive, she was treated to your roast beef sandwiches every time we traveled.  We usually shared a big roast beef.  I am a frequent patron of Arby’s, not only because I love the roast beef sandwiches, but because it provides me fond memories of travel with my spoiled precious girl.  In light of the cult of Hogg targeting you for boycott, my family and I are prepared to patron your establishment once per week to show our support should you not cave to this boycott request.  However, should you decide to cave to this boycott request by the cult of Hogg, my family and I are prepared to not darken the doorway, drive-through window or any affiliate of Arby’s ever again, despite the fond memories it brings of travel with my now deceased four-legged companion.  Moreover, my family and I will encourage our friends and acquaintances to engage in the same should you choose to side with those seeking to remove the citizens’ rights to keep and bear arms.  Charlotta “ChaCha” Chihuahua, who was a fierce protector and now waits at The Rainbow Bridge, wags her tail in agreement.