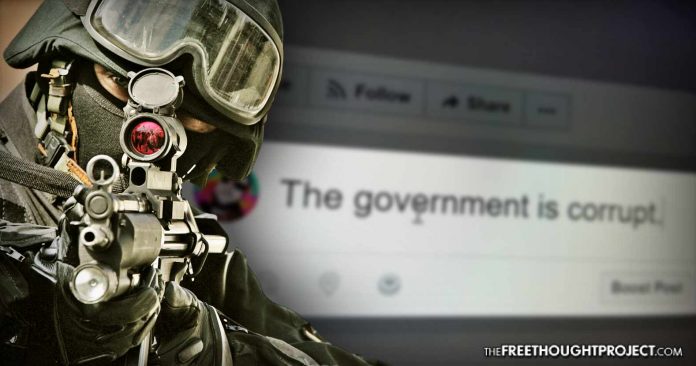 The owners of a tactical supply company were violently arrested and then detained for hours with no explanation while their home was raided by a SWAT Team and their assets were seized—but the evidence used against them by police had nothing to do with alleged illegal activities.

In an exclusive interview with The Free Thought Project, Sarah Leach said that she and her husband, Andrew, were ambushed and detained by police for more than 13 hours before they finally received an explanation for their arrest. The evidence the officers claimed to have against them came in the form of a previous error made by state police and a stack of papers that contained detailed screenshots of posts from their social media accounts.

“The raid was a result of two things, according to the Riverside Sheriff’s Investigator who interviewed me after having detained me for 13 hours without charges; the fact that they were aware that California Highway Patrol had seized, and then given back to us, high capacity pistol magazines to the prior year, something they are calling an error on CHP’s end. More disturbing were the stacks of printed pages from my social media accounts, particularly those things which criticize police and government overreach, police violence, my personal ideologies regarding self-governance and the inalienable rights we are afforded as human beings, and even memes and jokes they found, as parts of evidence to request a search warrant, including posts of a very subjective and ironic nature.”

Leach said the ordeal began when she and her husband were running errands one morning. After they parked at a strip mall and got out of their car, a patrol car from the Riverside County Sheriff’s Department pulled up and blocked their path. Two deputies got out and informed the couple that one of the taillights on their car was out.

“We attempted to thank them and proceed, but were blocked from movement,” Sarah Leach said. “It was at that point I noticed a few others sheriff’s vehicles had arrived, including undercover vehicles. I realized this was not a traffic stop when I saw police agents in blue jeans with AR-15s surrounding the area. I began to record on my phone and inquire as to whether I was being charged, detained, or was free to go. They violently cuffed me, threw my phone on the hood of the car, and shoved me in the back of an un-air-conditioned police vehicle for about one hour until their supervisor arrived to begin questioning me about aforementioned magazines.”

After the pair were violently handcuffed, they spent the rest of the day in police custody, and while they were being treated like criminals, they were given little explanation about what crimes they had committed. During that time, a number of federal agencies worked together to raid the Leach’s home, seizing more than 100 personal items—all of which was obtained legally.

“We were transported to the police station, where we would subsequently be held for 13 hours without being able to make a phone call or ascertain charges against us,” Leach said. “All the while, the SWAT team, with the assistance of the ATF, FBI, and National Terrorism Task Force raided my home, removing over 120 items, the vast majority of them NOT being our personal firearms, but business records, personal hard drives which house film and music, notebooks, maps of the local area, plate carriers, legally obtained ammunition, the magazines in question, and a great deal of other personal effects and assets.”

Leach told The Free Thought Project that the investigators gave “no other reason for the raid than inflammatory social media posts,” and they revealed that an investigation was started after a post on one of their social media accounts was reported by a “concerned individual.”

“They had allegedly been observing us for about one month, as well as observing Andrew’s elderly parents, a Baptist minister, and a county librarian, possibly the most harmless and docile individuals on earth, who have been dragged into this investigation, which is especially tragic consider Andrew’s father had suffered a stroke only a few weeks ago and has been in healing, just recently able to return to his work as a preacher,” Leach said.

A copy of the search warrant given to Sarah and Andrew Leach by the Riverside County Sheriff’s Department lists both of their personal Facebook accounts:

Leach said that after she and her husband were arrested, federal agents used the garage door opener in her car to gain access to her house. While the physical damage to the property was small, she said they were traumatized by the fact that the feds raided their home and stole countless possessions after obtaining a search warrant with no legitimate evidence.

“The damage was minimal in the sense of the physical integrity of the house. SWAT raids these days are known for tearing people’s walls apart, shooting their pets, breaking their windows,” Leach said. “The real damage comes from the horror of your personal property and your home being violated so egregiously over claims that can never be proven, as they are so absolutely false.”

The Leachs own a tactical supply company in California. They do not sell firearms, but they do sell parts that can be used by individuals on their firearms, among a variety of other products. Leach noted that the business is completely legal, and follows all of the state’s regulations.

“We do not sell firearms, rather, we sell the parts and tools to be purchased by customers who wish to complete or modify their own firearm. We also sell knives, flashlights, t-shirts, belts, vests, optics, and various tactical supplies,” Leach said. “Our customer base is very diverse, from elderly women to law enforcement and military.”

As the couple attempts to put their life back together, they are faced with the task of appearing in court for a victimless crime that boils down to the fact that law enforcement chose to target them over of a series of social media posts they deemed “offensive.”

While there are cases where police find violent threats online that were posted by suspected gunmen in the days before their attacks, and cases where FBI informants befriend individuals for the sake of convincing them to agree to carry out an attack, the Leachs’ case, is the exact opposite.

As Leach noted, the screenshots that were used by police depicted content that questioned the narrative, criticized government overreach and called for police accountability. Instead of advocating for violence or threatening anyone, the posts condemned the violent methods used by the government and police.

“This is precisely what we have been warned about regarding prosecution over thought crimes,” Leach said. “Whether or not you support firearm rights, or even like us personally, it must be acknowledged that a search warrant was obtained at least in part based on opinions, both serious and joking, that have been said online among friends, a true Orwellian nightmare manifest into reality.”

If you would like to donate to Sarah and Andrew Leach’s legal fund you can do so here: