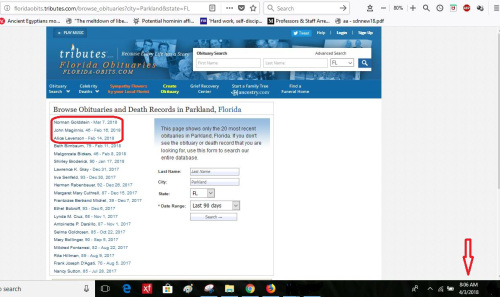 Here are the names of the 17 individuals who were killed on February 14, 2018, in Parkland Florida:

Florida Obituaries is part of Tributes.com, which describes itself as:

Tributes.com is the online source for current local and national obituary news and a supportive community where friends and family can come together during times of loss and grieving to honor the memories of their loved ones with lasting personal tributes.

According to Florida Obituaries:

Here’s a screenshot of the Florida Obituaries page, showing the date (4/3/2018) and time (8:06 AM)when I took the screenshot (click image to enlarge):

Notice the box on the webpage and in the screenshot that allows you to search for a particular name?

I did just that, and conducted a search, using the date range of “last 90 days,” for each of the 17 individuals who allegedly was shot to death on February 14, 2018, in Parkland, Florida. In each case, I got the same result:

No results were found using your search criteria, so we increased the date range to ‘2000 to present’ and removed the city.