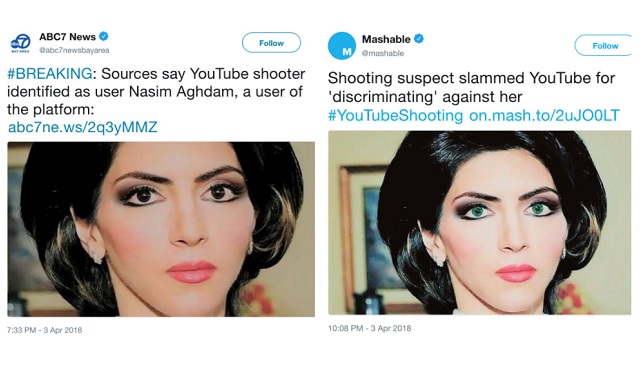 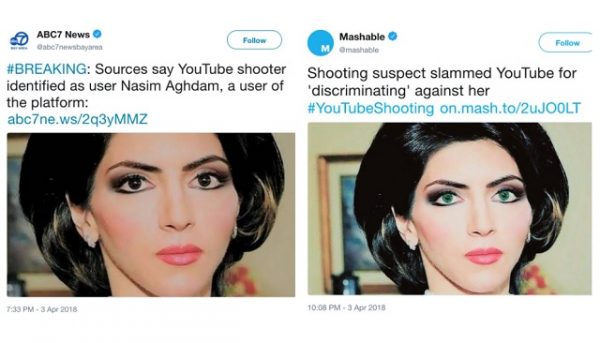 Left-wing news outlet Mashable ran a “whitened up” image of Iranian-Turk YouTube shooter Nasim Aghdam as the header to their article on Tuesday’s shooting in San Bruno.

The image shows Aghdam with green eyes and lightened up skin: Though the YouTube shooter was initially described as a “white female wearing a headscarf,” it turned out she was a 39-year-old Iranian-Turk immigrant who can barely speak English.

Aghdam is a self-described “Persian Azeri female vegan bodybuilder” and a radical animal rights activist who campaigned for PETA.

While the image they ran is allegedly from Aghdam’s Instagram, there’s literally hundreds of images of her they could have chose from. A search of Google News shows not one single other outlet chose to run with this photoshopped picture.

Twitter users slammed Mashable for running with the image:

After much criticism, Mashable added a note to the bottom of their article reading: “Note, the header image used was an image uploaded by Aghdam to her Instagram account. It was not edited by Mashable.”

Despite knowing the image is a photoshopped fake, they elected not to change it.

UPDATE: Mashable finally removed the image from their website and their Twitter on Wednesday and apologized “for any confusion caused.”