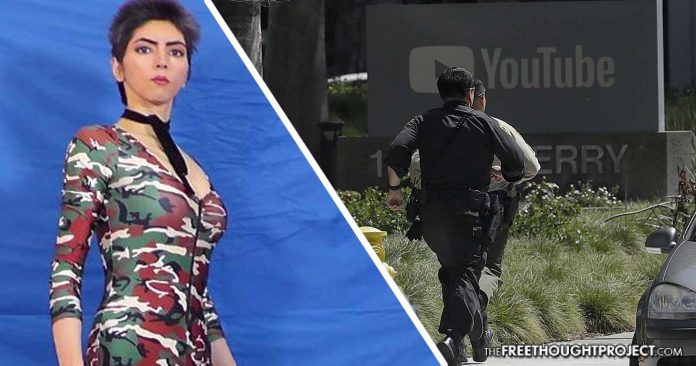 San Bruno, CA — Chaos erupted in California on Tuesday as a woman, now identified as 39-year-old San Diego resident Nasim Aghdam, walked into YouTube’s headquarters and began shooting people with a handgun. Aghdam wounded three YouTube employees in her rampage before reportedly turning the gun on herself and ending her life.

During the shooting, multiple employees inside the building were updating their family members in real-time using social media. One of those employees, Salahodeen Abdul-Kafi, a company product manager, posted on Facebook that he was OK before giving his eyewitness account.

Abdul-Kafi explained to his friends and family—incorrectly thinking Aghdam was a male—that “He had a shooting mask on, full body armor and was calmly walking and firing a handgun.” He added, “We jumped to the floor then ran as fast as we could.”

Employee Dianna Arnspiger also noted that the shooter had her face covered and was using a “big huge pistol.”

“It was a woman and she was firing her gun. And I just said, ‘Shooter,’ and everybody started running,” Ms Arnspiger said.

Zach Vorhies, 37, a senior software engineer at YouTube, said he also saw the shooter out in the courtyard where she was yelling, “Come at me, or come get me.”

Adding to the mystery surrounding the case, Aghdam was reportedly a prolific YouTuber and an animal rights activist. According to reports, Aghdam ran a website with an alleged manifesto that targets YouTube for censorship and demonetization of her video content.

She wrote on her website, nasimesabz.com, “Be aware! Dictatorship exists in all countries but with different tactics! They only care for personal and short-term profits and do anything to reach their goals even by fooling simple-minded people, hiding the truth, manipulating science and everything, putting public mental and physical health at risk, abusing non-human animals, polluting the environment, destroying family values, promoting materialism and sexual degeneration in the name of freedom and turning people into programmed robots!”

She goes on to quote Adolf Hitler saying, “Make the lie big, make it simple, keep saying it and eventually they will believe it.”

The rest of her message targets YouTube and censorship. “There is no free speech in the real world and you will be suppressed for telling the truth that is not supported by the system. Videos of targeted users are filtered and merely relegated so that people can hardly see their videos.”

As TFTP as reported, YouTube has since started cracking down on channels whose content they deem “extreme,” and, in some instances, pulling funding for the simple reason that the channel is too small. Aghdam was apparently affected by one of these. Though Aghdam’s main English channel had more than 5,000 subscribers, according to ABC 7, many of her videos appeared to be demonetized.

Her father confirmed this Tuesday when he told the Bay Area News Group that she was angry at YouTube because it had stopped paying her for videos she posted on the platform.

YouTube had “stopped everything” and “she was angry,” Ismail Aghdam said in a telephone interview with the local news agency.

According to Ismail, he reported his daughter missing on Monday after she stopped answering the phone for two days. Oddly enough, police were apparently in contact with his daughter the day of the shooting as they found her sleeping in a car around 2 am the morning of the shooting.

What’s more, Ismail reportedly warned police that his daughter may be trying to attack YouTube because she “hated” the company.

As WTOP reports, Mountain View Police spokeswoman Katie Nelson confirmed officers located a woman by the same name asleep in a vehicle asleep in a Mountain View parking lot on Tuesday morning. Ms Nelson said the woman declined to answer further questions but would not be drawn on whether police were warned Aghdam might go to YouTube.

Adding even more mystery to this shooting is that even though Aghdam’s website was rife with anti-YouTube sentiment, and her father reportedly warned police about his daughter’s “hatred” of the company, law enforcement said the shooting was being investigated as a domestic dispute.

The Free Thought Project will keep reporting on this situation as it unfolds.