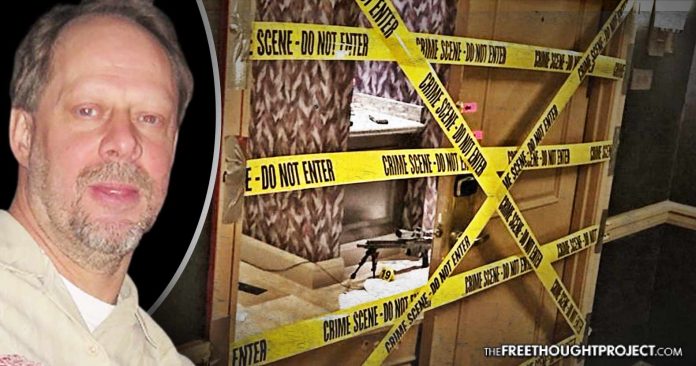 Washington, D.C. – It has been more than six months since the deadliest shooting in modern U.S. history killed 59 and injured 851, when Stephen Paddock allegedly opened fire on a crowded country music festival in Las Vegas, yet the American public has few answers as to a motive for the massacre or whether others were involved in the planning or operationalizing of the attack.

Since the attack on Oct. 1, 2017, there has been a consistent lack of transparency that has raised questions as to whether some type of cover-up was ongoing. Legitimate inquiry into the attacks has reportedly been shut down at the highest levels, and high-ranking FBI officials in Washington are involved in a cover-up.

The FBI’s “official” narrative goes something like this: Paddock was a mysterious lone wolf gunman. He was a mystery man and habitual gambler who snapped, bought guns, and shot up a music festival—and no one knows why.

This massive cover-up involves the FBI attempting to hide the fact that they have evidence that the election of President Trump was a catalyst for the radicalization of Paddock—and that other persons of interest could potentially be involved in the massacre.

Despite the official narrative forwarded by the FBI and Las Vegas Metro Police Department—that alleged Paddock was a mysterious loner who has stumped law enforcement’s efforts to procure a motive—Thomas Paine, a Gerald Loeb Award Recipient, and two-time Pulitzer Prize Investigative Reporting nominee, reported for True Pundit that FBI sources have provided him with information that there is evidence of a strong political motivation for the shooting, which has been completely covered-up by high-ranking FBI officials in Washington.

Revelations pinpointed by the True Pundit investigation, which differ from the official FBI and LVMPD narrative, include:

A portion of a classified intelligence report obtained by True Pundit—allegedly used to debrief FBI brass and the LVMPD—confirms Paddock’s behavior and purchasing pattern of guns after the 2016 presidential election were likely triggered by his political affiliations/ideology.

“Mr. Paddock’s purchasing pattern reflects a violent behavior profile that appears to be inspired by political or ideological bent.” the confidential memo reads. “One possible domestic/political group would be ANTIFA related.

“Mr. Paddock’s first weapons were reportedly purchased in October 2016, with numerous additional weapons (more than 40) purchased in the run up to the attack. The coincidence of such an escalating ramp of weapon procurement is, all beginning just after the election, compelling and cannot be ignored.

“Moreover, the behavior ‘baking period’ from point of first procurement to final act of terror is extremely short and the election appears to have been the trip wire, with the final act inspired by other unknown factors.  Key is trying to understand what his purpose was in doing dismounted surveillance in Chicago and Boston, and apparently without any weapons on hand.”

According to a tweet by Thomas Paine, the timing of the recent release of several CCTV video clips of Paddock at the Mandalay Bay, curiously released to the New York Times, was meant to deflect from the recent revelations reported by True Pundit:

While law Enforcement has publicly refused to consider the possibility of a second shooter, a key video captured during the shooting is a potential game changer, according to intelligence officials who told True Pundit “the audio on the feed clearly indicates an overlap of rifle fire—multiple rifles firing from Mandalay Bay.” The source maintained that the 9-minute video, attached below, has been ignored and covered up, by FBI officials.

True Pundit reported that FBI insiders believe there is a possible second shooter present in the audio stream and that this shooter is discernible at various points throughout the attack. Furthermore, they recommended a detailed acoustic analysis of the entire event “with constructive interference and noise generation of sound waves within the rifle reports post-filtering the audio stream for the numerous echoes and other noise,” according to one well placed FBI insider, who continued explaining the rationale:

“Sub-optimized due to non-synchronous firing of weapons, this constructive interference actually creates sound amplification spikes (loudness) in the sound waves themselves and this would indicate the presence of a second shooter. This phenomenon would be best captured from audio/video devices close to the Mandalay Bay firing points.”

Ironically, FBI brass in Las Vegas, headed by Special Agent in Charge Aaron Rouse, reportedly refused to allow such analysis, and largely ignored rudimentary investigative steps in favor of focusing solely on Paddock as a lone-wolf gunman in an effort to bolster the politically expedient loner narrative. Agents who reportedly attempted to pursue other leads were told to redirect their resources towards Paddock.

“The first five audible shots appear to originate from a first shooter who pauses after these first five shots,” an unnamed intelligence veteran told True Pundit. “The second possible shooter—who is firing at a much higher rate of speed and for a longer duration—follows immediately thereafter. The first shooter then begins firing again at the same time as the second shooter but at a noticeably slower rate. All of this takes place within the first five seconds of the video.

“These seemingly disparate sound streams cannot logically come from the same weapon, fired at the same time, by the same lone shooter. One of the areas of keen interest is the acoustics and sounds that are being stripped and separated using highly sophisticated programs that digitally lay down the signature for each sound emission or in this case, each shot, from each gun and from every potential angle.”

If these reports from FBI insiders are accurate, the FBI is engaged in a major cover-up of the Vegas massacre for political purposes. The fact that these leads were only pursued by agents who did so on their own, without official authorization, reveal an intentional ignorance about this tragic event that warrants further investigation.

“He did a series of radio and media interviews in Australia that were compelling,” the FBI insider said. “He unknowingly divulged information during those interviews that only law enforcement knew about at the time.”

Curiously, FBI brass, led by Rouse, refused agents permission to interrogate Hodge, who soon fled the city after the attack, eventually returning, only to leave the country and then return again. Despite being told to stand down by FBI brass, FBI insiders and intel vets ignored those orders and tracked Hodge to numerous interesting places following the Las Vegas shooting.

Furthermore, the FBI source told True Pundit that Hodge described details of the attack and tools Paddock used that were only known to a handful of federal and local law enforcement official at the time.

“We were still processing the crime scene and Hodge was discussing evidence no one else could have known about,” the FBI official said. “He was giving interviews to Australian media literally while this scene was unfolding. I’m talking minutes after Paddock’s body was found in the suite, Hodge was live on air on his phone.”

The something curious began happening.

“He began deleting his online DNA so to speak,” one intelligence veteran said. “Even though we were told not to we were able to recover many things that were deleted.”

If you want to further understand the depths of the ongoing FBI cover-up of the Vegas massacre, and find out how mystery man Brian Hodge connects to the story, tune in for a follow-up article dedicated to exposing the damning truth!