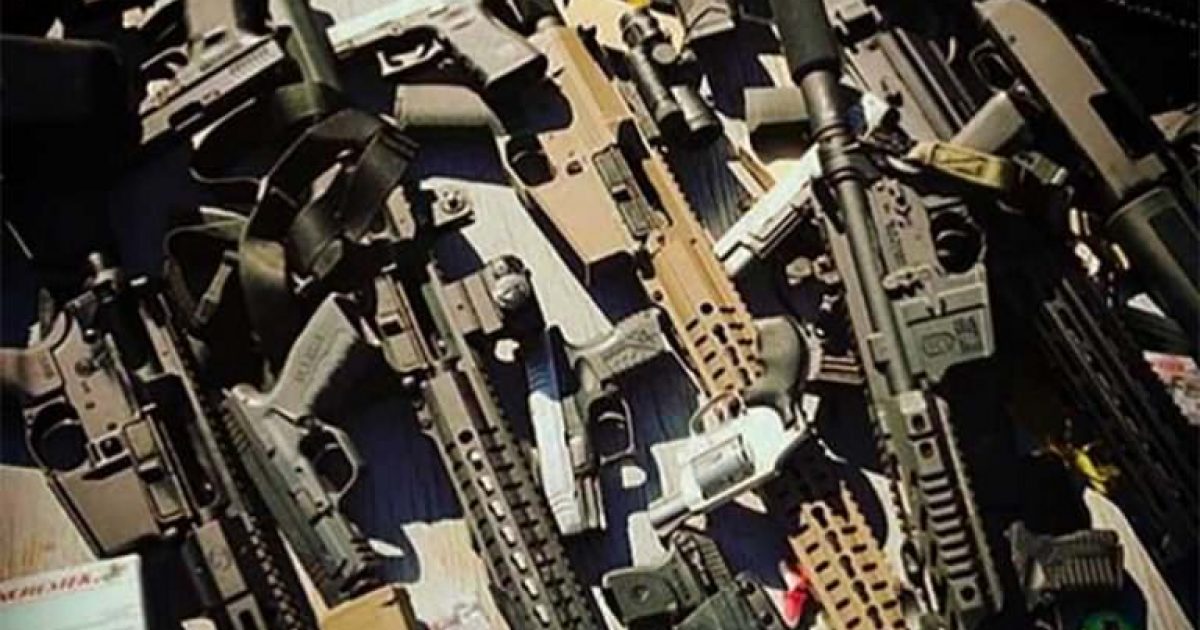 How can I say such a thing?  Well, let me remind you of the words that came out of Senator Dianne Feinstein’s own mouth in 1995.

She still hasn’t changed her position despite the fact that she has admitted that no piece of legislation will stop mass shootings.

However, new legislation being put forward by Democrat Representatives David N. Cicilline (RI) and  Frederica S. Wilson are simply following in the footsteps of Feinstein’s attempted gun ban in 2013 following the Sandy Hook incident.  Feinstein not only went after handguns and shotguns, but she also wanted gun owners’ fingerprints too.  Thankfully, that piece of unconstitutional garbage was defeated.

Now, we’ve got Cicilline and Wilson attempting to do something similar with HR 5087 and HR 5077, which are virtually the same “Assault Weapons Ban of 2018” bill.

“Assault weapons were made for one purpose,” a statement released by Cicilline said. “They are designed to kill as many people as possible in a short amount of time. They do not belong in our communities.”

Nonsense!  That is not their design.

Both bills seek to ultimately rid Americans of their firearms, including hunting shotguns and semi-automatic handguns.  In fact, the bills seek to ban all semi-automatic shotguns, pistols and rifles, anything that “requires a separate pull of the trigger to fire each cartridge,” and “utilizes a portion of the energy of a firing cartridge to extract the fired cartridge case and chamber the next round.”

All AR and AK platforms of rifles are included, as well as Thompson rifles.  These people even took the time to write out long lists of specific weapons that are to be banned.  Read those lists here and here.

The only exemptions, according to the legislation are:

Additionally, if an FFL dealer receives a grandfathered banned weapon, they must notify law enforcement.

The sole purpose of the bills is to classify nearly EVERY form of semi-automatic firearm as an “assault weapon” solely for the purposes of banning the sale, manufacture, transfer, and distribution.

“How some models or features made the cut and others didn’t is a mystery to anyone with the most elementary knowledge of firearms technology,” said the National Rifle Association’s Institute for Legislative Action.  “Clearly, however, two of America’s most popular defensive firearms – the AR-15 and the Glock 17 – would be prohibited under the Act. The former is banned by name (“[a]ll AR types”) and the latter as a “semiautomatic version of an automatic firearm” (i.e., the Glock 18). That alone puts the bill at odds with existing Supreme Court precedent, which makes clear the Second Amendment protects the sorts of firearms in common use for lawful purposes. “

It’s not just that, but the legislation also actually bans shotguns with a rocket launcher on them!  Has anyone ever heard of that?  I mean, it sounds pretty cool, doesn’t it?  However, I’ve never heard of such a thing.  And yes, I think rocket launchers should be protected under the Second Amendment.

All of this is unconstitutional as Congress has been given no authority to engage in such bans or restrictions under the people’s protection of the Second Amendment.

As of last month, both bills were referred to the Subcommittee on Crime, Terrorism, Homeland Security, and Investigations where they will more than likely die a quiet death, as they should.

However, according to Media Trackers, Democrats in the House,

…hope they can force a floor vote on their bill through the use of what’s called a “Discharge Petition.” In such a case, if backers can get 218 members to sign the petition they can force a piece of legislation out of committee and directly to the House floor.

The last time this occurred was not too long ago.  In 2015, the Export-Import Bank billwas put to a vote on the House Floor out of committee through the used of a discharge petition.

Of course, this is just in the House.  Senator Feinstein put forth her own “assault weapons ban” bill, S 2095.  She has 29 co-sponsors for it, all Democrats.

Her bill mirrors the House versions.

Gun Owners of America referred to the bills as  “trojan horses.”

“Make no mistake, these bills are far nastier than the Clinton-Feinstein gun ban ever was,” Wrote GOA.  “Rather than requiring two irrelevant cosmetic features in order to ban a gun (as Clinton-Feinstein did), the Feinstein-Cicilline bills would require only one, thereby affecting tens of millions of semi-automatic rifles and handguns.”

“Sure, you can keep the guns and magazines you already have them — for now, at least,” GOA adds.  “But you have to keep them locked up, and private transfers would be outlawed by the legislation — unless you transfer them using a background registration check.  In fact, the bill makes no provisions for what happens to your guns if you die. And it’s far from clear whether you can pass them on to your kids — particularly if, for instance, your executor is one of the 257,000 military veterans who were unconstitutionally put into the NICS system.”

President Donald Trump, who supported the Clinton-Feinstein gun ban and who promised NRA members that the attack on the Second Amendment was over because they had a friend in the White House has spit on the Constitution he swore to uphold and said, “We can [ban bump stocks] with an executive order. I’m going to write the bump stock; essentially, write it out. So you won’t have to worry about bump stock. Shortly, that will be gone. We can focus on other things.”

I ask, by what constitutional authority are you doing this Mr. President?  You have none.  You are no better than the usurper before you in usurping authority to ban bump stocks.  That’s not a part of your job, sir.  Nor is it a part of the authority of Congress, and don’t think it doesn’t set precedence for the next person that occupies the White House.

GOA warns, “If President Trump can ban bump stocks without statutory authority, then a future president can ban anything without statutory authority… Banning something which helps a shooter “accelerate” a gun’s rate of fire can then be used by a future anti-gun Democrat President to ban polished bolts, match triggers, magazines, tripods, and perhaps even AR-15’s themselves — if they have pistol grips which allow them to be fired faster and more accurately.”

Listen to Executive Director of GOA, Erich Pratt as he explains the issue.

Friends, it really is time that we stopped playing defense with these Communists and listening to the whining of children like David Hogg and start going on the offensive like Senate candidate Austin Petersen and start looking to repeal unconstitutional gun laws and re-establishing the Second Amendment as our forefathers intended, not compromising because an emotional mob believes we are a democracy.