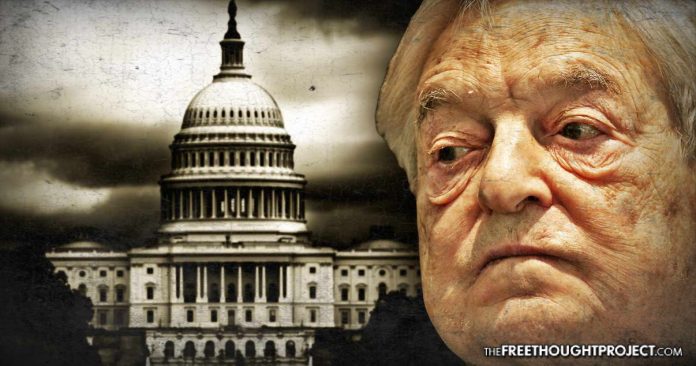 Albania — (RT) Documents the State Department was forced to publish show that it spent almost $9 million on political reform in Albania coordinated with billionaire George Soros. The US government denies the expenditure was inappropriate.

The US Agency for International Development (USAID) channeled funds into a ‘Justice for All’ campaign to reform the judicial system in Albania in 2016. The campaign was run by Soros’s East West Management Institute, according to the conservative watchdog Judicial Watch. The group obtained 32 pages of State Department documents in a legal battle, which concluded with the US government submitting to a Judicial Watch Information Act (FOIA) request in exchange for a dropped lawsuit.

“The Obama administration quietly spent at least $9 million in US taxpayers’ dollars in direct collusion with left-wing billionaire George Soros’s backing of a socialist government in Albania,” Judicial Watch President Tom Fitton said in a statement.

Soros is a billionaire and “shouldn’t be receiving taxpayer support to advance his radical left agenda to undermine freedom here at home and abroad,” Fitton added.

The Obama admin spent at least $9 million in tax dollars in direct collusion with left-wing billionaire George Soros to back socialist gov in Albania. Outrageous that State allowed the Soros operation to help direct taxpayer funds to other groups,https://t.co/f1rc1ADKEX

Following the report’s publication, a USAID official told Fox News that the agency did not provide grants to Soros’s Open Society Foundation (OSF) in Albania, which is technically true according to the Judicial Watch publication. Instead, the US embassy in Tirana and the OSF “each provided funding to a local organization to conduct a public opinion poll on attitudes towards the Judicial Reform effort,” a document from February 2017 said. The poll’s result sounded favorable for the judicial reform championed by the OSF and the Obama administration.

“For decades, there has been broad bipartisan agreement in Washington, DC, on the need to promote democracy and human rights abroad,” a spokesperson for OSF told Fox News in a statement, adding: “Of late there has been an unfortunate and misguided effort to politicize this process.”

Fitton and Judicial Watch were especially critical of US Ambassador to Albania Donald Lu, whom the group called in the statement “a holdover from the Obama administration” and an official with inappropriately close ties to Soros. The embassy in Tirana, they point out, frequently asks representatives of the OSF to “participate in technical reviews” of applications for funding USAID receives, according to a February 2017 memo.

Judicial Watch accuses Lu of interfering in Albanian politics by backing the country’s ruling Socialist Party at the expense of the opposition. The group said that in May 2017 Lu declared that the US would recognize the results of the Albanian general election even if the opposition refused to participate.

In March 2017, five Republican senators wrote to then-Secretary of State Rex Tillerson, asking about claims that US taxpayer funds were spent on interfering in the internal politics of countries such as Albania, as well as neighboring Macedonia.

“This includes reports of diplomats playing political favorites, USAID funds supporting extreme and sometimes violent political activists, and the US government working to marginalize the moderates and conservatives in leadership roles,” Senator Mike Lee (R-Utah) said at the time, adding that “this behavior is unacceptable and must be halted immediately.”

Judicial Watch has also made FOIA requests about the activities of Soros groups in Macedonia, Romania and Colombia.

Judicial reform in Albania remains a matter of controversy. In December last year, opposition parties in the national parliament tried to stop the appointment of an interim prosecutor general – with is part of Albania’s transition to the new system – by igniting smoke bombs in the chamber. The radical move was meant to express protest against what they called an unconstitutional move by the ruling party.

Last month, the political establishment in Washington was up in arms over the Trump administration’s proposal to cut the budget for “democracy promotion” activities abroad, specifically funding for the National Endowment for Democracy (NED) and its partisan adjuncts, the National Democratic Institute (NDI) and the International Republican Institute (IRI).