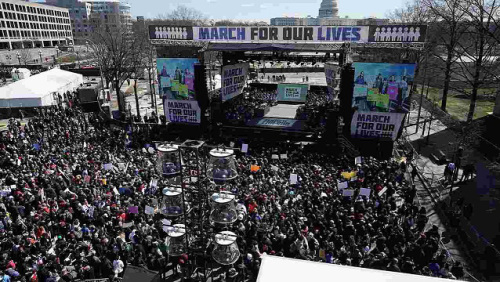 On March 30, 2018, I published the post, “Application for ‘March For Our Lives’ permit was made months before Parkland school shooting,” on a fascinating email that a contact of European researcher Ole Dammegard had received from a Washington, D.C. Metropolitan Police Department officer named Scott Earhardt.

The email was dated four days after the pro-gun control March For Our Lives demonstrations that took place in Washington, D.C. and other cities across America on March 24, 2018.

To begin, according to the PDF document, Metropolitan Police Department, Washington.D.C., Scott Earhardt indeed is a detective there. Here’s a screenshot I took from page 6 of the 65-page document:

“In reference to your inquiry concerning the March For Our Lives Demonstration, here in the District of Columbia on March 24, 2018. MPD received a permit application several months prior to the actual event, and there was several months of planning for this large event.”

Below is a screenshot of the email:

That the permit application for the March 24th “March For Our Lives” had been submitted “several months” before is most peculiar because one of the March’s organizers, the student group Never Again MSD, had been formed on February 15, 2018 — one day after the mass shooting at Marjory Stoneman Douglas (MSD) High School in Parkland Florida. February 15 is not “several months” before March 24.

Almost immediately after the “Application for ‘March For Our Lives’ permit was made months before Parkland school shooting” post was published, objections were made, claiming that purported counter-evidence directly contradict the Earhardt email.

The counter-evidence consists of:

The organizers of proposed special events are required to present event proposals to the MSETG and receive the concurrence of the group prior to the issuance of permits or licenses by the permit-granting agencies . . . . Presentation requests in the form of a Letter of Intent (LOI) must be received no less than ONE HUNDRED EIGHTY (180) DAYS prior to the date of the event and are processed up to one year prior to the proposed date of the event. The LOI should be addressed to D.C. Mayor’s Special Events Task Group; 2720 Martin Luther King, Jr. Avenue SE, 2nd Floor; Washington DC 20032. The LOI may be submitted to [email protected]

Several claims have been made of emails from Officer Earhardt, in which he contradicts what he had said in his email of March 28 to Ole Dammegard’s contact.

In a YouTube video, Nathan Stolpman of Lift The Veil Productions claims he received an email from Officer Earhardt saying the MFOL permit application was “filed” on March 13, 2018, instead of “several months” before. Below is a screenshot of the email:

In an April 3 follow-up email to Ole Dammegard’s contact, Officer Earhardt writes that he had misspoken in his earlier email of March 28. Instead of the permit application being received by Metro PD “several months” before, it actually had been received “several weeks” before the March:

“After reviewing my previous email, I had misspoke. It was not several months, it was several weeks prior to March 24th. MP actually received the permit application on February 21st and the permit was issued March 7th.“

Here are screenshots of Earhardt’s emails:

All of which is most confusing because Officer Earhardt has given different dates for the MFOL permit application:

In other words, Officer Earhardt has given: