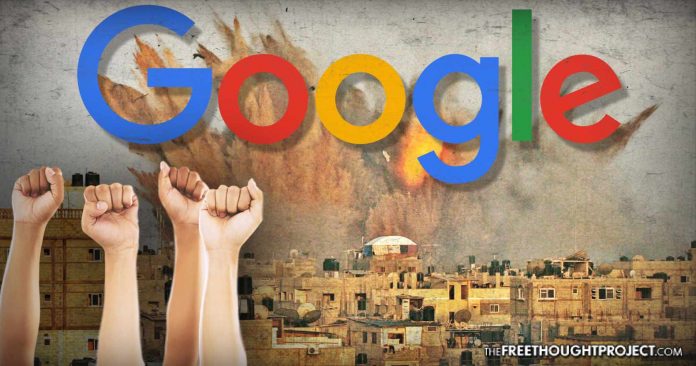 Last month, a press leak revealed that Google has been working with the U.S. Department of Defense on a drone program called “Project Maven,” which is being developed to scan images in drone footage and identify targets.

Prior to it being reported in the news, this project was unknown to most Google employees, even those who were working on different aspects of the project.

The company was so secretive about the project and kept their employees so compartmentalized, that thousands of talented engineers had no clue that they were aiding a war effort. Now, many of those employees are speaking out, and demanding that the company cancel its work on the controversial program.

This week, a letter that was signed by over 3,100 Google employees, addressed to Google CEO Sundar Pichai, stated that they did not want to be involved “in the business of war.”

We believe that Google should not be in the business of war. Therefore we ask that Project Maven be cancelled, and that Google draft, publicize and enforce a clear policy stating that neither Google nor its contractors will ever build warfare technology. Google is implementing Project Maven, a customized AI surveillance engine that uses “Wide Area Motion Imagery” data captured by US Government drones to detect vehicles and other objects, track their motions, and provide results to the Department of Defense. Recently, Googlers voiced concerns about Maven internally.

Amid growing fears of bias ed and weaponized AI, Google is already struggling to keep the public’s trust. By entering into this contract, Google will join the ranks of companies like Palantir, Raytheon, and General Dynamics. The argument that other firms, like Microsoft and Amazon, are also participating doesn’t make this any less risky for Google.

Google’s unique history, its motto Don’t Be Evil , and its direct reach into the lives of billions of users set it apart. We cannot outsource the moral responsibility of our technologies t o third parties . Google’s stated values make this clear: Every one of our users is trusting us. Never jeopardize that. Ever. This contract puts Google’s reputation at risk and stands in direct opposition to our core values. Building this technology to assi st the US Government in military surveillance – and potentially lethal outcomes – is not acceptable.

The letter ends by demanding that the company immediately cancel the project and also “Draft, publicize, and enforce a clear policy stating that neither Google nor its contractors will ever build warfare technology.”

Project Maven was launched in April 2017, and according to a Pentagon memo, the objective is to “augment or automate Processing, Exploitation and Dissemination (PED) for unmanned aerial vehicles (UAVs)” in order to “reduce the human factors burden of [full motion video] analysis, increase actionable intelligence, and enhance military decision-making.”

When the issue was raised last month, Google spokesperson Diane Greene assured the concerned employees that the technology “will not operate or fly drones” and “will not be used to launch weapons.”

However, the employees saw right through this excuse and pointed out in their letter that, “While this eliminates a narrow set of direct applications, the technology is being built for the military, and once it’s delivered it could easily be used to assist in these tasks. This plan will irreparably damage Google’s brand and its ability to compete for talent.”

Even if this technology is used for “non-offensive purposes,” it will still be assisting the military-industrial-complex to wage unjust wars. In fact, it is the responsibility of everyone who is a part of the machine to refuse participation in war efforts.

Anti-war activist Arundhati Roy once made this point quite eloquently, saying, “Colorful demonstrations and weekend marches are vital but alone are not powerful enough to stop wars. Wars will be stopped only when soldiers refuse to fight when workers refuse to load weapons onto ships and aircraft when people boycott the economic outposts of Empire that are strung across the globe.”

In a statement to The New York Times this Tuesday, Google CEO Pichai said, “any military use of machine learning naturally raises valid concerns. We’re actively engaged across the company in a comprehensive discussion of this important topic.”

Pichai also doubled down on the claim that Project Maven was “specifically scoped to be for non-offensive purposes.” Unfortunately, it doesn’t seem that this protest will end Google’s relationship with the Pentagon.

In an interview last November, Schmidt recognized that there was “a general concern in the tech community of somehow the military-industrial complex using their stuff to kill people incorrectly,” but he insisted that the military would only “use this technology to help keep the country safe.”

Google is notorious for helping the government build a war state abroad and a police state back home and until now, their employees have been largely silent about becoming a part of the military-industrial complex.