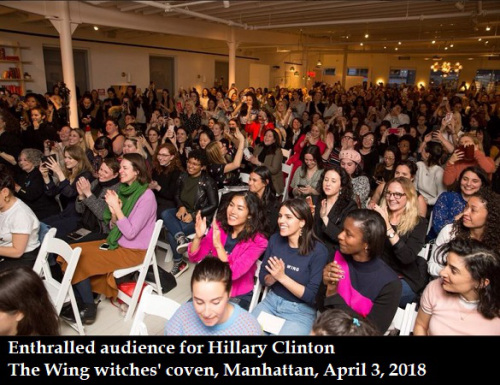 “a network of co-working and community spaces designed for women. The Wing’s mission is the professional, civic, social, and economic advancement of women through community. We believe that the act of coming together as women creates new opportunities, ideas and conversations that will lead to greater mobility and prosperity for womankind.”

The Wing is elitist because it is pricey — an “all access” membership costs $2,700 a year. The club is also rabidly anti-men: It publishes a magazine titled No Man’s Land.

But on the club’s Instagram account, The Wing identifies itself as something more than just a feminist club, but as a witches’ coven:

“The Wing is a co-working and community space for women. We’re a coven, not a sorority.“

Unsurprisingly, The Wing is pro-gun control:

The Wing’s Instagram is full of references to vampirism (which is a form of cannibalism), witchcraft and Satanism:

The Wing’s founder and CEO is Audrey Gelman, who was the 2008 Hillary Clinton presidential campaign’s press aide.

Gelman is a childhood friend of Lena Dunham, and an ex-girlfriend of Terry Richardson — the pornographic fashion/celebrity photographer who once depicted himself copulating with a sheep, and is accused of molesting young models.

“I’m like any modern woman trying to have it all. I just wish I had more time to seek out the dark forces & join their hellish crusade.”

In a tweet on February 4, 2017, Gelman identifies herself as a Satanist: