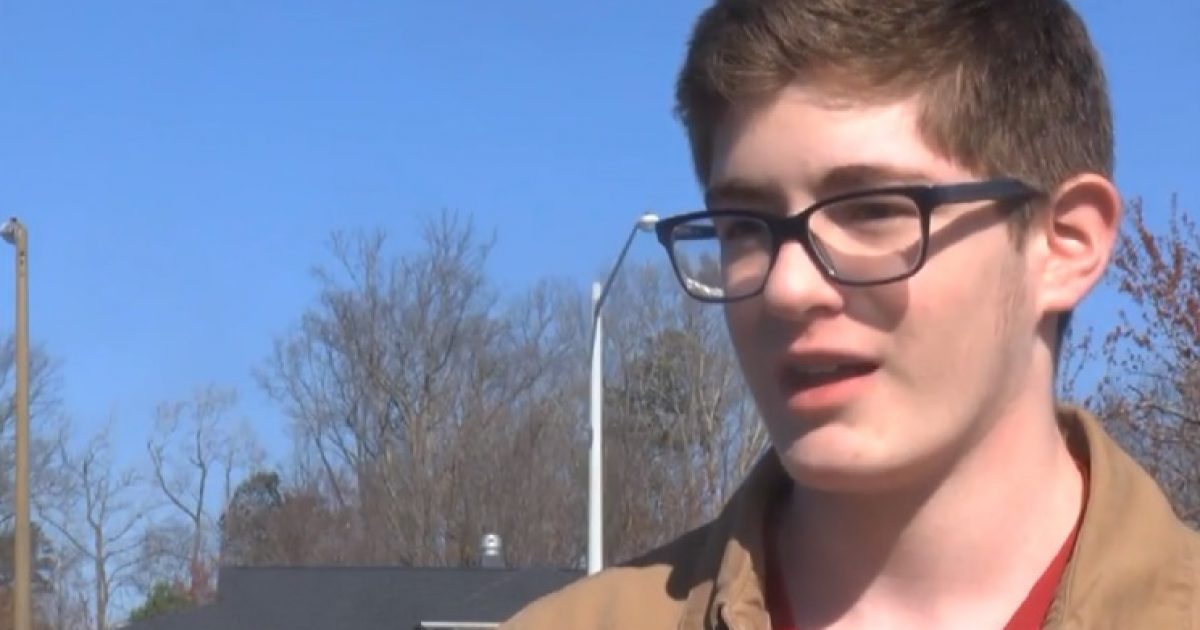 A Virginia teen has watched as anti-Second Amendment students marched on DC, funded in large part by money from George Soros, Michael Bloomberg and others.  He believes, as I do, that there are far more young people who support the God-given right to keep and bear arms than the 200,000 that showed up in DC two weekends ago and wants to rally those who do in his state to stand in solidarity for their Constitutionally protected rights.

Aidan Jackson, 15,  told WAVY, “When I saw the ‘March for Our Lives,’ I saw a lot of people for gun control. Not every youth believes that. Gun control is not the answer.”

Already, he’s won my approval because he is thinking past emotions and rhetoric.

As a freshman at Ocean Lakes High School and a member of the Virginia Beach Young Republicans participated in the walkout at his school.  However, he used it as an opportunity to engage his fellow students whom he disagreed with by carrying a sign that read, “Gun control is not the answer.”

“Someone came up out of the blue, looked at me, read my sign, and ripped my sign,” he said. “The entire school applauded.”

So much for those students being concerned with the right to free speech, eh?  And David Hogg had what to say about this?  (crickets)

Despite the “someone” actually engaging in vandalism by destroying Jackson’s property, Jackson was motivated to do something and so he formed a plan to rally those of like mind on May 19, 2018, at Mount Trashmore.

“It inspired me because they came up to me and said, ‘I don’t necessarily agree with you, but you really are brave to have gone through that,'” he said.  “I think everyone has a say. The next generation, my generation, will be leading. We want to get them involved as soon as we can.”

That’s exactly right, and he’s very perceptive to see that.

Jackson is not just inviting those who agree with him to his rally to hear why he and others support the Second Amendment, in which I’m sure no one will be ripping opposers’ signs and destroying their property, in a similar fashion to the young punks that followed the lead of David Hogg and trashed stores during their walkout.  And we heard what from Hogg when that occurred?  (crickets)

“I want to invite all the viewers to come along and show their support and really view a different point of the aisle in case you are in support of gun control,” he told the outlet.

Aiden is no the only person who has been inspired by the anti-Constitution crowd to organize pro-Second Amendment rallies.  However, he is the only one I know of that is doing it specifically targeting the youth in his state.

David Clayton, the national public relations representative for Three Percent Republic in West Virginia, is using social media to organize patriots and Second Amendment supports across the nation to gather at their state capitals on Saturday, April 14,2018 at 2 PM EST to stand in solidarity for the God-given right to keep and bear arms.

Via The National Constitutional Coalition of Patriotic Americans Facebook page, Clayton has organized times and places for each rally at each state capital in the united States.

Through the NCCPA’s events page, you can find your state and sign up to attend, see how many people are planning to attend or just show up and give your support.  The protests are meant to be an exercise of free speech and in no way is to condone any violence.

The organizing of this event that will span several time zones comes even as Marxists and their useful idiots are planning to storm Washington, DC illegally to advance a Communist-style gun grab as they attack the Second Amendment, the Constitution, and the rights of hundreds of millions of Americans.

There is also a National Shoot for Freedom Day that is being scheduled at local gun ranges around the country for May 19, 2018.  I’ll have more on that in a future article.

In either case, we can guarantee the mainstream media will ignore the support of these events or attempt to belittle them or present them as “radical.”  They always do.

The reason they engage in this deception is to not allow the American people to see that there are a tremendous amount of Americans who support the Second Amendment versus the whiners and complainers who want to disarm you.

For more on March For Our Guns, click here.