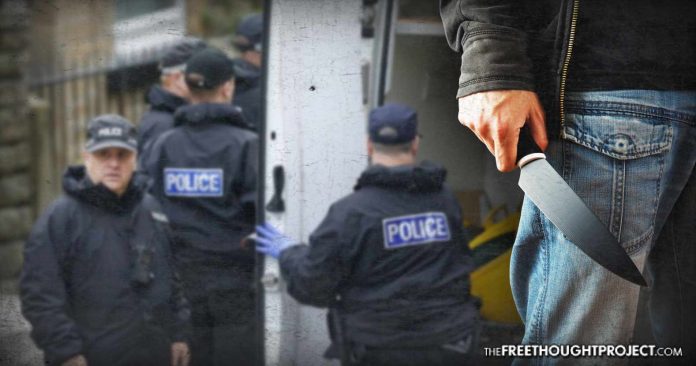 In the early 20th century, British citizens were trusted by their government to own firearms. In fact, then-Prime Minister Robert Gascoyne-Cecil, the Marquess of Salisbury once said he would “laud the day when there was a rifle in every cottage in England.” However, beginning with a law requiring a permit for handguns, Britain would embark down the slippery slope of a total citizen disarmament, and by 1996, all guns, including handguns, were banned in the UK.

In fact, so scared of its citizens having guns is the United Kingdom that in 2006, the government even banned toy guns under the guise of “reducing violence” with the Violent Crime Reduction Act. Fast forward to 2018 and — as gun rights activists have consistently warned — only criminals and the government have guns.

The result of the incremental stripping of rights has left the citizens of the United Kingdom sitting ducks merely waiting for violent criminals and a corrupt government to take hold. According to multiple new reports, this now seems to be the case.

Scotland Yard has since called an emergency meeting as London is now gripped by unprecedented violent crime. This violent crime spike comes as an ex-senior officer says “police have lost control of the streets.”

Following a massive spike in murders — one that has now passed that of New York City — police chiefs are scrambling to try and tackle knife and gun violence in the city.

“London is currently experiencing an exceptionally high level of gun and knife crime,” the invite to the emergency meeting read, according to the Guardian. “It is important that our response is fully informed by community concerns and any community tensions are rapidly identified, heard and responded to.”

According to the Guardian, among those attending the meeting were the Labour MP for Tottenham, David Lammy, and Nicola Calica-Myall, an activist against knife crime whose own son was stabbed 37 times when he was just 17 and survived.

“It’s important to know that our fears as a community are being recognized and things are in place,” Calica-Myall said, according to the Guardian. “It’s everybody’s problem and more Londoners need to recognize this situation may not go away any time soon.”

Indeed, the problem has gotten so out of hand that six teenagers were stabbed this week, in the space of only 90 minutes.

Although many of the solutions proposed with undoubtedly involve more police, the former head of head of diversity and policing, Victor Olisa, warned that police are losing control of public spaces and hit out at senior officials for their “deafening silence.”

“Communities are saying we don’t see the police around anymore,” he said. “It appears to people I have spoken to as though the police have lost control of public spaces and the streets,” the Guardian reports. “The silence from senior officers in the Met is deafening. They should say we need more information from the public, this is what we are doing, this is what the results are.”

The need for police would be drastically diminished if the citizens of London could simply defend themselves. However, that is not an option unless they use sticks or knives (under three inches): a futile choice considering the fact that criminals have illegal guns and knives at their disposal.

Even many police chiefs in the United States understand that police cannot be everywhere to stop every crime. As TFTP has reported, police chiefs across the country have urged that citizens arm themselves because a well-armed citizen is the best defense against crime — not police.