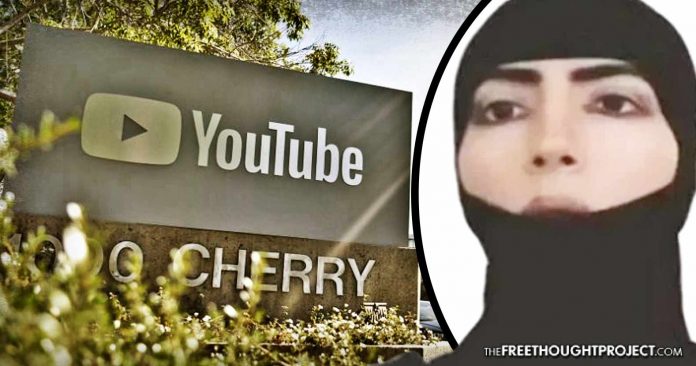 Breaking news alerts announcing reports of a shooting at YouTube’s headquarters quickly faded from the spotlight and out of the news cycle—and there are a number of imperative reasons why the rampage initiated by a woman who injured three people and then killed herself, has not been used to push the mainstream’s media obsession with gun control.

Here are 5 compelling reasons why the YouTube shooting has disappeared from headlines:

1. As a woman, a peaceful vegan, and a PETA advocate, the suspected shooter is the opposite of the typical “mass shooter” profile promoted by the mainstream media.

When the suspected shooter was identified as Nasim Najafi Aghdam—a 39-year-old woman attempting to carry out a mass shooting when the overwhelming majority of mass shooting suspects are typically men in their early 20s, it may have seemed as though she would actually receive more media attention than most.

However, Aghdam does not appear to have been a white supremacist, a crazy conspiracy theorist, or a religious cult member. Instead, she was a vegan YouTube content creator with a long list of bizarre videos and a passion for animal rights. Despite being Iranian-American, which would excite neocons who are hungry for war with Iran, it does not appear that Aghdam had a political motive or was affiliated with any terrorist groups.

2. The shooter reportedly used a handgun, which also deviates from the mainstream narrative that all mass shooters use high-powered rifles.

Aghdam’s weapon of choice was a 9mm Smith & Wesson handgun, which she purchased legally in January. While Bloomberg attempted to blame Smith & Wesson by noting that the company’s AR-15 was the gun used in the Parkland shooting, the fact is that the weapon Aghdam used does not fit the narrative of dangerous firearms pushed by the mainstream media.

To attempt to ban a 9mm handgun would be almost impossible, but to attempt to ban a firearm that has been demonized and referred to as an “assault rifle” used in a number of mass shootings, is something the media has been working towards for years. While it is estimated that more than 8 million Americans own AR-15’s, it has not stopped the mainstream media from openly calling for a ban on “assault rifles” and attempting to explain “Why the AR-15 keeps appearing at America’s deadliest mass shootings.”

3. The shooting happened in California—a state that has already enacted some of the strictest gun control laws in the nation.

When a mass shooting occurs, one of the first things the mainstream media and gun control advocates tend to do—after blaming the weapon—is to look at the location where the shooting took place and how that state’s gun laws can be tightened to prevent another attack.

In this case, the shooting happened in San Bruno, California, which already has some of the strictest gun laws in the United States. As a “May Issue” state, California issues concealed handgun permits to individuals at the discretion of the local sheriff, and restrictions can be based on where that permit can be used in the state itself. California also requires all guns to be registered, and it does not honor permits from any other states.

4. The police were warned about the shooting by the suspect’s father in advance, and they did nothing—something the media tends to cover up.

One day before Nasim Aghdam entered YouTube’s headquarters and opened fire on innocent employees, her father contacted police to report that she was missing, and warned that she may be planning an attack on YouTube. Ismail Aghdam said “she was angry” because YouTube “stopped everything” in terms of monetizing her videos, and he warned police that his daughter may be trying to attack YouTube because she “hated” the company.

While police reportedly found Nasim Aghdam sleeping in a car at 2 a.m. on the morning of the shooting, it is not clear why greater surveillance measures were not taken at YouTube’s headquarters, or how long the attack lasted before Aghdam took her own life and police arrived at the scene.

As her father noted, Nasim Aghdam was overwhelmingly angry with YouTube for demonetizing her videos and she believed that the platform was intentionally censoring her work. On her website, Aghdam wrote, “There is no free speech in the real world and you will be suppressed for telling the truth that is not supported by the system. Videos of targeted users are filtered and merely relegated so that people can hardly see their videos.”

While most content creators who have had their channels demonetized by the giant platform would never dream of going to its headquarters and attacking innocent employees, the fact is that YouTube does have a serious ongoing problem.

As The Free Thought Project has reported, while YouTube has ignored ISIS recruiting videos, it has chosen to label videos that show the United States committing war crimes, conducting airstrikes that kill innocent civilians and aiding the enemies it claims to be fighting as “extremist content” that is banned from the site.

The platform has also started openly targeting smaller channels by demonetizing them and removing the incentive for the creators to continue to attempt to grow their channels.

While there is no way to defend Nasim Aghdam’s actions, there are a number of glaring reasons why the shooting she carried out has been blacklisted by the mainstream media, as it does not fit the typical narrative and can hardly be used to rally against one race or religion, or to call for increased gun control.