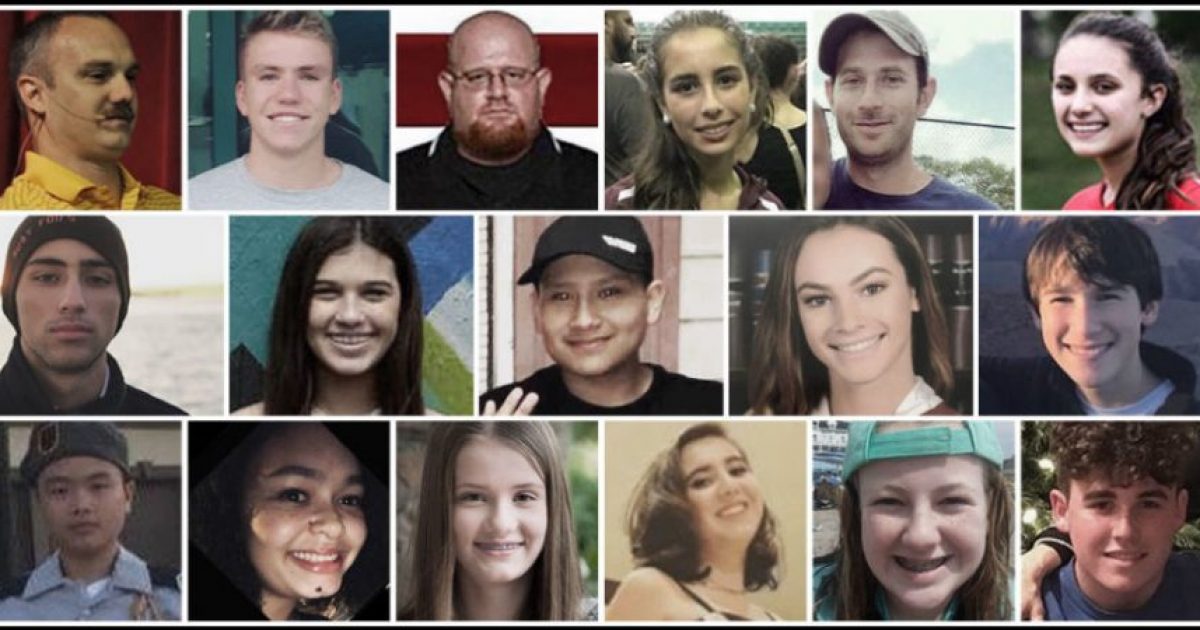 While I believe the Parkland, Florida high school shooting has the elements of a false flag operation, that does not mean that there were no real casualties, and it appears that all those listed were in fact killed in the shooting.

In a blog post, Dan Cromer provided a brief commentary, complete with screenshots of searches for reports of deaths of the 17 Parkland Victims.

Here’s what he wrote and the information he provided on April 6, 2018.

According to the official narrative, on February 14, 2018, a mass shooting occurred at Marjory Stoneman Douglas High School in Parkland, Florida. Seventeen people were killed and seventeen more were wounded, making it one of the world’s deadliest school massacres. The perpetrator, 19-year-old Nikolas Cruz, was identified by witnesses and arrested shortly afterward. He confessed, according to the Broward County Sheriff’s Office. He was charged with 17 counts of premeditated murder and 17 counts of attempted murder.
Curiously, Ancestry.com, the world’s largest online history resource does not show death records for any of the seventeen victims. This database is a compilation of obituaries published in U.S. newspapers, collected from various online sources. For researchers, obituaries are genealogical goldmines, including information such as names, dates, places of birth and death, marriage information, and family relationships. Ancestry’s U.S., Cemetery and Funeral Home Collection (1847-2018) provided the following search results:
1. Alyssa Alhadeff, 14

17. Peter Wang, 15
take our poll - story continues below
Completing this poll grants you access to DC Clothesline updates free of charge. You may opt out at anytime. You also agree to this site's Privacy Policy and Terms of Use.

So, based on these results, one can ask: Why did Nikolas Cruz confess to the Broward County Sheriff’s [sic]?What death records did the Broward County Sheriff’s Office use to charge Nikolas Cruz with 17 counts of premeditated murder and 17 counts of attempted murder? Like so many of these “mass shooting events”, we are left with more questions than answers.

However, I realize that Ancestry.com is not an official site for death records, as those are kept with county and state.  Yet, Ancesty.com does sync with state records all across the nation, so why, after nearly two months, did they not have the records?

According to Florida Statutes, “It is the policy of this state that all state, county, and municipal records are open for personal inspection and copying by any person. Providing access to public records is a duty of each agency.”

Death certificates without a cause of death are available from FloridaHealth.gov for $5 each, and rush service is an additional $10, which brings the total to $97, something I just can’t spare at the moment with a family of twelve to care for.  However, if anyone is interested in chipping in so that I can retrieve the documents and present them in a follow-up post, feel free to donate to that cause and I’ll get on it as soon as I get the funds. (You can donate here, or via cryptocurrencies Dash, Ethereum, Bitcoin Cash, Litecoin, ETH Classic and Decred.

With that said, just hours after the post above, Ancestry began returning searches that acknowledged individual death records.  Click the names to see the results.  The names without a link are those that still would not pull up in the search.

Why is this important?  I believe that when people really die in these shootings, those facts should be presented and unrefutable.  This is why I would seek out the official documents from the state of Florida as Ancestry.com is not in a position to verify these deaths.

Furthermore, Legacy.com, which is linked to from both The Sun-Sentinel and The Miami Herald for obituaries, has searchable obituaries where each person is listed.  This is something that many claimed was untrue, but you can see for yourself.

I don’t believe we’ve been given all the details in this shooting nor in the Las Vegas shooting.  Video still remains that has not been released in either of these shootings.  Unlike Columbine, we actually saw the shooters on camera in the school with their weapons.  To date, the public has not seen a shred of evidence of the confessed shooter Nikolas Cruz in the school shooting or carrying a weapon, much less in “full metal garb” the way one teacher on the third floor described him.

However, I find it curious that within hours of a post that exposes there are no records on these people, the records somehow magically start to appear in the search.