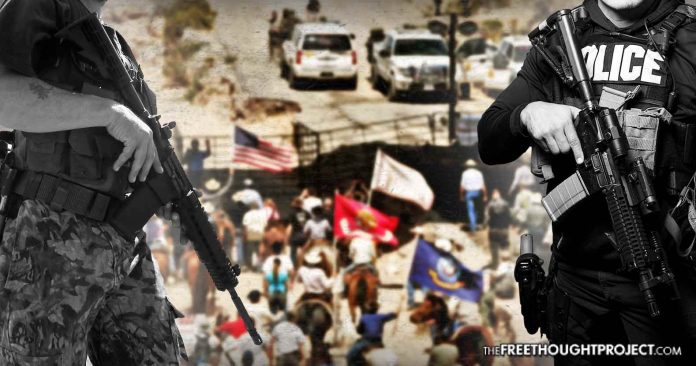 While there are a number of arguments that are used by gun control advocates, one of the most common is that individuals do not need high-powered firearms because they will not stand a chance in a war against the federal government. However, four years ago, a group of armed men and women did come together to form a militia, as referenced in the Second Amendment, and they successfully stood up to the government agencies that were infringing upon their rights.

On April 5, 2014, an ongoing land dispute between cattle rancher Cliven Bundy and the United States Bureau of Land Management hit its peak when the agency and federal law enforcement began seizing cattle owned by Bundy that they claimed were trespassing on “federally-owned” land.

The dispute first began in 1993 when Bundy refused to pay for a cattle grazing permit to use the land near his ranch in Clark County, Nevada, after the BLM claimed that he must reduce the side of his herd to 150 and that the size of land where his cattle were allowed to graze would be severely restricted. Bundy argued that the federal government does not have the authority to own large amounts of land, which launched a legal battle that continued for the next two decades.

As the Tenth Amendment Center reported, the federal government claims to own 81 percent of the land in the state of Nevada and “On the land they manage, the feds are threatening to evict tenants who refuse to pay outrageous fees.” As a result, Bundy was “the last of a dying breed, the only holdout who hasn’t been driven off land in Clark County in recent years, land his family has utilized and improved for nearly a century.”

In addition to seizing cattle, the government also began conducting heavy surveillance around the Bundy Ranch. On April 8, Cliven Bundy and his wife, Carol, told the Washington Free Beacon that more than 200 agents from the BLM and FBI were stationed around the property, armed with “automatic weapons, sniper rifles, top communication, top surveillance equipment, lots of vehicles,” as helicopters circled overhead and agents blocked the nearby roads.

The Bundys’ son, Dave, was arrested by federal agents for filming them near his father’s land and cited with misdemeanor counts of refusing to disperse and resisting arrest on April 6.

Lead investigator Larry Wooten revealed in December 2017 that officers involved in the arrest “bragged about roughing up Dave Bundy, grinding his face into the ground and Dave Bundy having little bits of gravel stuck in his face.” A memo from Wooten referenced a pattern of “far-reaching misconduct, recklessness and unrestrained antipathy toward the family.”

As the news spread and the public began to learn of the increasing presence of federal agents on the land, and the hundreds of cattle that were being held captive, men and women from across the United States converged on the Bundy Ranch to protest the BLM.

On April 12, hundreds of armed protestors participated in a standoff at the mouth of Gold Butte, the location where the cattle were seized. Dozens of militiamen also protested on a nearby highway overpass, causing traffic to stall for miles.

As BLM agents began to warn that they were armed with tear gas and were prepared to use it on the protesters, Las Vegas Metro Deputy Chief Tom Roberts announced that Cliven Bundy’s nearly 400 cattle would be returned within the next hour, in an effort to de-escalate the situation.

Following the standoff, Cliven Bundy continued to let his cattle graze on federal land without a permit. Although he and his sons were charged with a total of 15 counts of criminal conspiracy and other violations, all of their charges were finally dropped in December 2017.

U.S. District Court Judge Gloria Navarro ruled that the case against the Bundy family was an example of “flagrant prosecutorial misconduct” after federal prosecutors were caught withholding evidence from defense attorneys, which violated the Brady rule. Navarro dismissed all charges “with prejudice” so that the government cannot attempt to prosecute the case again and she concluded that “a universal sense of justice was violated.”

There are a number of ways in which the standoff could have ended, but the fact that Bundy, his family, and their supporters stood up to the federal government and lived to the tell the story has stood an incredible moment in history for every American who has ever questioned by the federal government’s overreaching abuse of power.