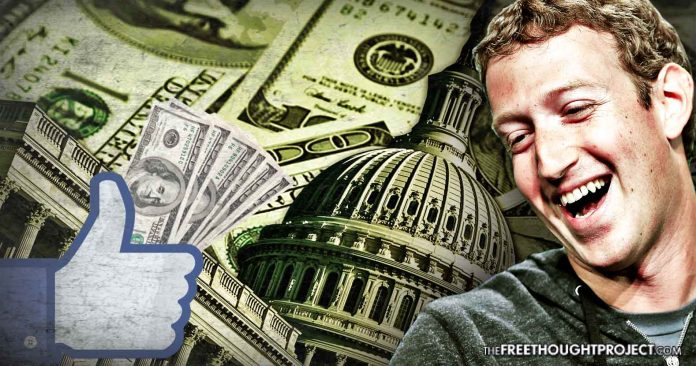 Washington, D.C. — (ZH) Facebook and affiliated political groups have donated heavily to members of two committees set to interview CEO Mark Zuckerberg next week, according to analysis from the Center for Responsive Politics via USA Today.

Since 2007, the social media giant has contributed a cumulative $381,000 to 46 of the 55 members on the House Energy and Commerce Committee, which will hear from Zuckerberg on Wednesday.

Rep. Anna Eschoo (D-CA), whose district is adjacent to Facebook headquarters and home to many Facebook employees, received the most from Facebook at $55,150 since 2007. Eschoo narrowly lost a battle with Pallone for ranking Democrat position on the committee in the 2014 election.

“This hearing will be an important opportunity to shed light on critical consumer data privacy issues and help all Americans better understand what happens to their personal information online,” Messrs. Walden and Pallone said in a Wednesday statement. “We appreciate Mr. Zuckerberg’s willingness to testify before the committee, and we look forward to him answering our questions on April 11th.” (also, thanks for all that money Zuck! We’ll be sure to put the softballs on a plastic “T” for you)

Meanwhile, a Roll Call report reveals that two Democrats on the House Energy and Commerce Committee have nearly $100,000 invested in shares of Facebook – with Democratic Reps. Joe Kennedy of MA and Kurt Schrader of OR owning approximately $80,000 and $15,000 respectively.

Twenty-eight members listed stock in the social media giant, according to Roll Call’s Wealth of Congress project. Among them, Democratic Reps. Kurt Schrader of Oregon and Joseph P. Kennedy III of Massachusetts sit on the House Energy and Commerce Committee, while Democratic Sen. Sheldon Whitehouse of Rhode Island sits on Senate Judiciary.

Both panels, along with Senate Commerce, invited Zuckerberg to appear before them after reports that Cambridge Analytica, a British big data firm, obtained access to private information of millions of Facebook users under questionable circumstances. Cambridge Analytica reportedly incorporated the data in ad-targeting tools used by political campaigns including President Donald Trump’s winning 2016 bid.

“Congressman Kennedy’s stock holdings do not influence his work in Congress,” his office said in response to questions from Roll Call about his Facebook shares. –Roll Call

Ten Democratic members of the Committee, including Kennedy, sent a letter last Thursday to the Federal Trade Commission (FTC) to commend the agency on its investigation into Facebook.

Meanwhile House Minority Leader Nancy Pelosi owns at least $500,000 shares of Facebook through her husband, while Texas Republican Rep. Michael McCaul reported at least $1 million in Facebook stock and around $30,000 in 2016 capital gains through his wife and child.

Illinois Rep. Brad Schneider has at least $200,000 in the company through his wife’s IRA, while Rhode Island Rep. Jim Langevin, a fellow Democrat, holds stock worth at least $115,000 and had capital gains of more than $5,000, according to his 2016 financial disclosure. Ohio Republican Rep. James B. Renacci also owns at least $150,000 worth of Facebook stock.

Several lawmakers with holdings in the company say they recognize that new policies on social media oversight are needed after the latest developments. –Roll Call

Several other members of Congress own Facebook as well – however one Senator, Rep. John Yarmuth (D-KY) wants nothing to do with Facebook, and has announced that he will be selling his shares.

According to Roll Call, here are all the members of Congress who listed Facebook holdings in their 2016 financial disclosures, along with the minimum worth of their stocks and of any capital gains or dividends.