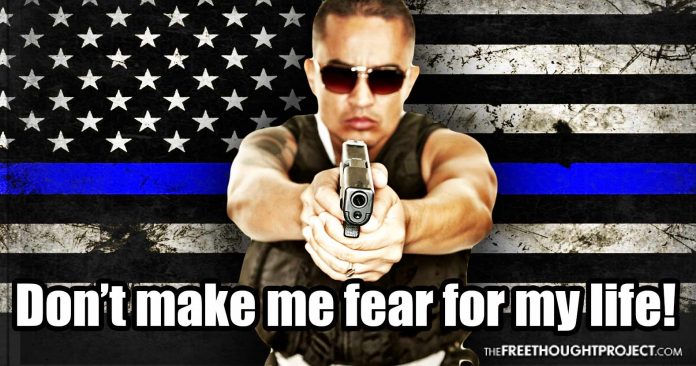 In a ruling that will be used to a reinforce a disturbing pattern practiced by police officers across the United States, the Supreme Court has determined that officers who shoot non-threatening citizens are completely justified and cannot face consequences for their actions—as long as they express to the court that they feared for their safety.

The case of Kisela v. Hughes originated from a police shooting in Tucson, Arizona, in 2010. Police Corporal Andrew Kisela heard a report over police radio about a woman using a kitchen knife to hack a tree and acting erratically in public. He responded to the scene with two other officers.

On the other side of a chainlink fence, the officers saw Sharon Chadwick standing next to her car. Her roommate, Amy Hughes, emerged from the house with a kitchen knife held at her side. Despite the fact that the two women were standing at least six feet apart, the blade of the knife was facing away from Chadwick, and Hughes did not appear to be threatening her roommate in any way, all three officers approached the fence with their guns drawn.

Less than 60 seconds after Kisela saw Chadwick, he opened fire and shot Hughes four times through the fence. After she fell to the ground, officers jumped over the fence, approached Hughes and placed her in handcuffs, and then called paramedics.

It took just seconds for Officer Kisela to choose to shoot Hughes multiple times, even though she had not broken any laws and she did not appear to be threatening anyone. Miraculously, Hughes did not die from the gunshot wounds she sustained and Chadwick was not injured during the reckless attack.

Hughes filed a lawsuit against Kisela, based on the claim that her civil rights were violated during the shooting. While a federal district judge ruled in favor of Kisela, the 9th Circuit Court of Appeals reversed the decision and argued that Hughes’ Fourth Amendment rights were clearly violated.

The Supreme Court has now reversed the 9th Circuit court’s decision, and in its opinion on the case, the court argued that there should not be a debate over whether Hughes’ Fourth Amendment rights were violated, because Kisela should automatically be afforded “qualified immunity” as a police officer.

“The Court need not, and does not, decide whether Kisela violated the Fourth Amendment when he used deadly force against Hughes. For even assuming a Fourth Amendment violation occurred—a proposition that is not at all evident—on these facts Kisela was at least entitled to qualified immunity. ‘Qualified immunity attaches when an official’s conduct does not violate clearly established statutory or constitutional rights of which a reasonable person would have known … Because the focus is on whether the officer had fair notice that her conduct was unlawful, reasonableness is judged against the backdrop of the law at the time of the conduct.’”

As SCOTUS Blog noted, even if the Supreme Court judges believed that Kisela was guilty of violating Hughes’ Fourth Amendment rights, “Kisela still could not be sued because any rights that he might have violated were not clearly established—a key factor in whether government officials enjoy immunity from lawsuits.”

Even though Chadwick testified that she did not feel threatened by Hughes or the knife in her hand at the time of the shooting, the Supreme Court has chosen to side with the police officer who chose to open fire within seconds, before taking the time to accurately assess the situation.

By supporting Kisela’s actions, the Supreme Court has essentially given all police officers a blank check, which says that if they see a person standing in the distance on her property, and she appears to be holding a weapon in her hand, the officer has the right to open fire and shoot her multiple times—as long as the officer maintains that he feared for his safety, even if he cannot prove that the person he targeted was threatening him.

In a dissenting opinion, Supreme Court Justice Sonia Sotomayor argued that while the other two officers attempted to use verbal commands to convince Hughes to drop the knife, Kisela made no attempt to de-escalate the situation and opted to use deadly force instead.

“Hughes was nowhere near the officers, had committed no illegal act, was suspected of no crime, and did not raise the knife in the direction of Chadwick or anyone else. Faced with these facts, the two other responding officers held their fire, and one testified that he ‘wanted to continue trying verbal command[s] and see if that would work.’ But not Kisela. He thought it necessary to use deadly force, and so, without giving a warning that he would open fire, he shot Hughes four times, leaving her seriously injured. Kisela did not wait for Hughes to register, much less respond to, the officers’ rushed commands. Instead, Kisela immediately and unilaterally escalated the situation.”

It is no secret that police officers regularly get away with shooting and killing innocent citizens in the United States, and they do so by arguing that they opened fire because they feared for their safety.

By choosing to support a trigger-happy officer who chose to put lives at risk, the Supreme Court has made it clear that there will be no justice for the innocent woman who received life-threatening injuries as a result of the attack and that police will continue to get away with targeting the mentally ill, and will face no consequences for their actions.