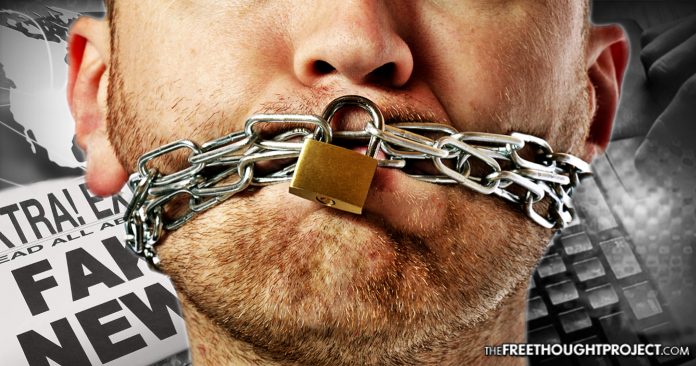 Legislation is being considered in the state of California that would effectively kill free-speech online by placing unprecedented regulations and restrictions on media outlets, especially those who deviate from the official government narrative on controversial issues.

The senator who proposed the bill, Richard Pan, was also behind the infamous bill mandating vaccinations for children who attend government schools.

According to the text of this bill, titled SB1424 Internet: social media: false information: strategic plan:

This bill would require any person who operates a social media, as defined, Internet Web site with a physical presence in California to develop a strategic plan to verify news stories shared on its Web site. The bill would require the plan to include, among other things, a plan to mitigate the spread of false information through news stories, the utilization of fact-checkers to verify news stories, providing outreach to social media users, and placing a warning on a news story containing false information.

(b) The strategic plan shall include, but is not limited to, all of the following:

(1) A plan to mitigate the spread of false information through news stories.

(2) The utilization of fact-checkers to verify news stories.

(4) Placing a warning on a news story containing false information.

This bill would place the government of the state of California in a position of arbiter of truth and would allow them to censor any information that runs counter to the official narrative. This is especially dangerous for activists and dissenters, or anyone who finds themselves questioning authority or exposing corruption.

The “fact checkers” that major platforms like Facebook have relied on in the past are proven to be attack dogs of the establishment, who are obviously approaching the stories with their own subjective bias. For example, Politifact was caught changing vital information about Syrian gas attacks when the mainstream narrative on the subject changed.

Last month, The Free Thought Project experienced Politifact’s corruption firsthand, when they marked one of our articles as “false” because a local police department changed their story after the fact. They also used quotes from our staff out of context. Unsurprisingly, this was an article about guns, the hot-button topic of the week where the mainstream is attempting to control the narrative.

Snopes, the most popular “fact checker” is even worse, and we have caught them in multiple lies and deceptions over the years. Just a few months ago, our staff called out Snopes for lying about House Joint Resolution 76, which presented huge Fourth Amendment concerns. Snopes has also been complicit in allowing flimsy stories promoting a new cold war with Russia to go “unchecked” for evidence or facts. Last year, Snopes gave The Washington Post a pass, allowing them to publish a false report about the Russians hacking Vermont’s power grid.

Snopes has been riddled with stories of corruption in recent years, from fraud and embezzlement to using company funds to pay for prostitution. David and Barbara Mikkelson, ex-spouses and founders of Snopes, have been mixed up in an ongoing legal battle since their divorce, and many of these details were revealed in court.

As The Free Thought Project reported last week, the government of Malaysia recently banned what they deem to be “fake news,” and is now threatening 6 years in prison for people who share content that they disagree with.

Various neighboring countries in Southeast Asia, including Singapore and the Philippines, are introducing similar laws. Meanwhile, some European countries already have these types of laws on the books.

Last year in Germany, legislation was passed that legally forces publishers to delete whatever the state deems to be hate speech or misinformation. Earlier this year, French President Emmanuel Macron called for emergency legal action to crack down on “fake news” during elections.

These governments say that they are protecting their citizens from misinformation, but what they are really doing is protecting themselves from competition. As many of these politicians have pointed out, the sea of information available to us on the internet has fundamentally changed the way that governments operate and it has stifled their ability to keep the masses of society bound to a particular worldview.