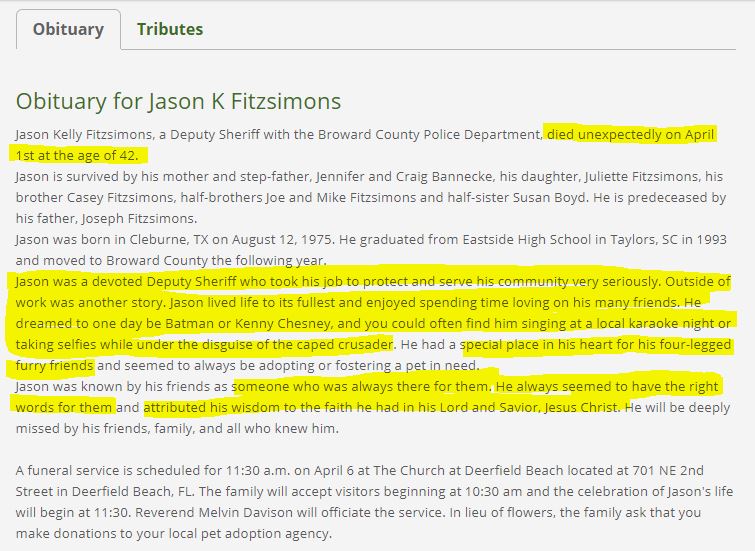 Sometime on or around April 1, 2018 Broward County Sheriff’s Deputy Jason Fitzsimon, 42 years old and in excellent state of mind and health, called in sick to his job. Shortly thereafter Fitzsimons was found dead on his sofa. There has been a complete “news blackout” of this curious and untimely death. Deputy Fitzsimons wasn’t just any law enforcement officer. Unlike many of his peers, he took to social media to question the potential agenda behind the February 14 Marjory Stoneman High School mass shooting, suggesting that the event was being used to promote the Democratic Party’s gun control platform in anticipation of the 2018 midterm elections. And recent personnel decisions involving public officials indicate (e.g. here and here), an unwritten law of taxpayer-funded institutions is that employees disavow and steer clear of “conspiracy theories” that may call their superiors motives into question.

One post found on Fitzsimon’s Facebook page depicts the Parkland massacre’s main spokesperson, David Hogg, in National Socialist regalia, with the caption, “We will March Until We Disarm Every American.” Fitzsimons Facebook page has since been “scrubbed” of any 2018 posts, which would of course include those that may be calling the the Parkland shooting or its aftermath into question. The circumstances surrounding Deputy Fitzsimon’s death are sketchy. The official cause has been attributed to cancer, yet this is contradicted by an obituary found at obittree.com, stating that he “died unexpectedly.” The “died unexpectedly” phrase is one morticians and/or loved ones sometimes employ when for one reason or another they are reluctant to disclose the true cause of death, as in the case of a suicide.

Yet as the above obituary makes clear, Fitzsimons does not seem as if he would have been a likely suicide candidate. The law enforcement officer “lived life to the fullest and enjoyed spending time loving on his many friends [sic],”the document reads. Fitzsimons was also the life of the party, according to the obituary’s author(s). “He dreamed to one day be Batman or Kenny Chesney, and you could often find him singing at a local karaoke night or taking selfies while under the disguise of the caped crusader.” Further, the deceased also had a spiritual devotion “in his Lord and Savior, Jesus Christ.”

If Fitzsimons in fact died of cancer, the onset must have been extremely sudden. Neither the obituary nor accompanying memorials reference any struggle with the disease, but instead point to his inspiring presence while expressing astonishment at the abruptness of his passing.

Aside from numerous friends attesting to his warm disposition in their memorials, Deputy Fitzsimons appeared to be in excellent health, as various photos suggest. Those who received word via Twitter of Fitzsimon’s untimely death have expressed similar doubt and suspicion on the vague and unusual circumstances.

It is with a heavy heart that we announce the passing of Deputy Jason Fitzsimons today. Deputy Fitzsimons began his career with the agency In 2008. During this time he served with the North Lauderdale and Pompano Beach Districts. Our thoughts and prayers are with with his family. pic.twitter.com/vBmf50LtfJ 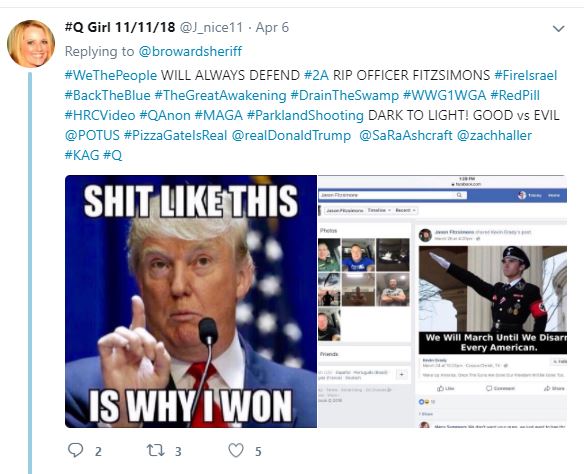 As is suggested in the aftermath of other recent mass shooting events, Fitzsimons simply may have possessed too much information, was at the wrong place at the wrong time, and/or asking sensitive questions of his peers and superiors on the specifics of the Parkland shooting. It is beyond dispute that the sheriff’s deputy had become uncomfortably outspoken on the February 14 event.

The record reflects that Deputy Fitzsimons was a wonderful individual and friend who cared about “truth” and the US Constitution. Perhaps these concerns are no longer desired by the management of certain policing agencies. There is indeed ample room for suspicion.