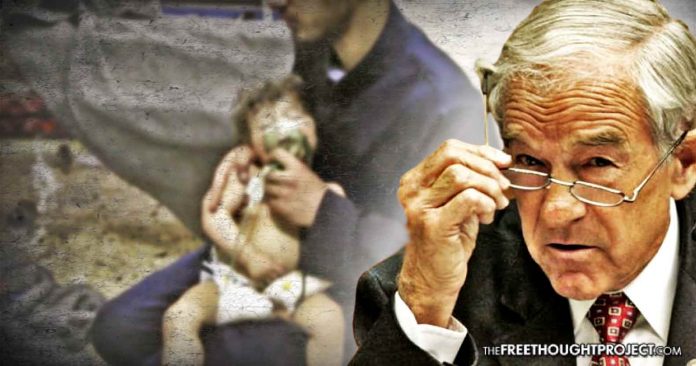 As the Free Thought Project reported this week, late Saturday night, the mainstream media began spreading the news of an alleged chemical weapons attack in Douma, Syria. Immediately after the unconfirmed reports, President Donald Trump began threatening Russia, Iran and “Animal Assad,” and blamed them for the attack. However, after examining the situation objectively, many people are now calling this alleged attack a false flag, including former congressman Ron Paul.

Indeed, less than a month ago, the Russian military predicted this exact scenario. As CNBC reported last month, the threat, by Chief of Russia’s General Staff Valery Gerasimov, was widely reported by Russia media sites such as state news agency RIA and Tass. It said Gerasimov said Russia had “reliable information” about militants preparing to falsify a government chemical attack against civilians.

In a report on Monday, former congressman Ron Paul presented his analysis via the Ron Paul Liberty Report, on which he alleged that this most recent chemical attack had all the telltale signs of a false flag attack.

“An incident will occur and somebody will get blamed and it’s usually a false flag,” said Paul.

“Right now, recently, it’s all been in Syria, ‘Assad did it! Assad did it!’” explained the former congressman. “No proof at all.”

Illustrating the premeditated nature of the deep state’s march to war with Syria, within only hours of the alleged attack, Israel launched a strike as the US military began prepping for deployment—with zero proof of Assad carrying out an attack.

On Tuesday, Trump announced that he has cancelled further appointments to plan the response to the chemical attack which has yet to even be investigated. It was also announced that a US destroyer was in route to the western Mediterranean to engage Syria.

People are going to die—including many innocent woman and children—and all of it will be based on what many are referring to as a false flag. However, the neocons do not seem to care.

While there is a tiny chance that Assad did actually release chemical weapons on his own people in order to drive out the remaining insurgents from Douma, it goes against all logic as it would provoke the actions which are now taking place—ensuring the rest of the country is invaded and turned to rubble by US-made missiles.

“The way the people that perpetuate these false flags [sic] say that Assad is gassing his own people, at the same time, he’s winning the war and the people are flocking back in to go to the territories that he has returned to the government of Syria,” explained Paul. “But, nevertheless, he’s out there gassing his own people, which makes no sense whatsoever and fewer and fewer people are believing this.”

Sadly, however, as Paul points out, it doesn’t matter if We the People do not believe them as the people who control the bombs will use this lie to their advantage to launch another war.

This time, however, it will involve straining the already tense relationship with Russia and Iran and could kick off World War III.

The idea of Assad gassing his own people is so preposterous that even FOX News’ Tucker Carlson weighed in on the issue Monday night, blasting both the left and the right for their role in pushing the US into another senseless war.

“All the geniuses tell us that Assad killed those children, but do they really know that? Of course they don’t really know that. They’re making it up. They have no real idea what happened,” Carlson said.

“Actually both sides in the Syrian civil war possess chemical weapons,” he said, noting that it wouldn’t have benefited Assad to use chlorine gas, since his forces have been winning the war in Syria.

Carlson and Paul both brought up the alleged attack which was blamed on Assad last year and pointed out that there was still no evidence proving it was the Syrian government. “But of course they were lying,” Carlson said, noting that US Defense Secretary Jim Mattis admitted two months ago that there is still no proof that Assad used sarin last year.

Nevertheless, just like Trump launched dozens of million dollar Tomahawk missiles at the country in an unprovoked act of war—based on rumors by known liars—this scenario will likely play out in a similar manner.

Based on an incident which is surrounded in lies, the US is now promising a military response within the next 48 hours.