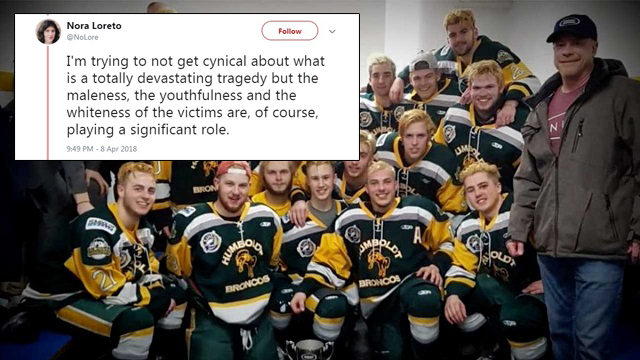 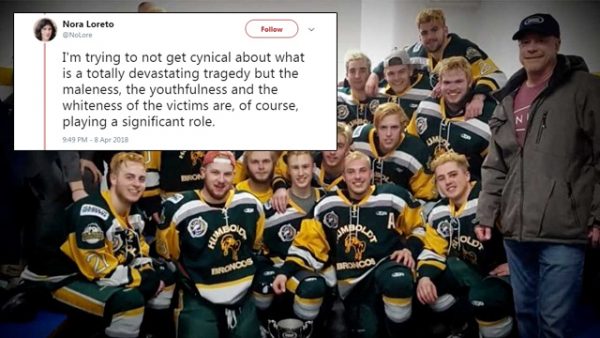 Nora Loreto, a writer and editor of the Canadian Association of Labour Media whose work has been carried in The Globe and Mail and Maclean’s, expressed shock on Sunday after learning $4 million dollars was raised for the families of the victims of a tragic bus crash in Saskatchewan.

As Humboldt prepares for tonight’s vigil, we’ve been learning more about the Broncos bus crash and its victims.

15 people were killed in Friday’s crash, 10 players and 5 team personnel. What follows are some of their stories: https://t.co/8kNNf3B8rW pic.twitter.com/rVc0kwmRl2

HuffPost Canada posted an article on Sunday detailing how funds were being raised to help the team members and their struggling families:

Nora Loreto reacted to the fundraiser with shock, saying: “This is a lot of money.”

This is a lot of money. https://t.co/pEwBvOR8nk

“I’m trying to not get cynical about what is a totally devastating tragedy,” Loreto said, “but the maleness, the youthfulness and the whiteness of the victims are, of course, playing a significant role.”

I'm trying to not get cynical about what is a totally devastating tragedy but the maleness, the youthfulness and the whiteness of the victims are, of course, playing a significant role.

“I don’t want less for the families and survivors of this tragedy,” Loreto said in a follow-up tweet. “I want justice and more for so many other grieving parents and communities.”

I don't want less for the families and survivors of this tragedy. I want justice and more for so many other grieving parents and communities. If @globeandmail or @macleans actually pay you to write articles for them I’m canceling my subscriptions immediately and telling everyone I know to do the same. This is the most deplorable and inappropriate tweet I’ve seen here. And that’s saying something

They have! And they have nothing to do with a tweet that isn't actually that controversial in context.

Except it's not, Mark.

I’m a Black woman who’s never even seen a live hockey game but this tragedy shook me to my core. I keep welling up at the mention of it. I donated to the gofundme as a show of support. Now is not the time to examine bias in grief. Sensitivity is a virtue

After her tweet went viral, Loreto spent the next two days portraying herself as the victim.

Does the first warrant the second? Obviously not. But anyway. pic.twitter.com/MxeqA4KzkC

Ok notifications are finally off for people looking to harass me. I'll be able to at least see your replies again.