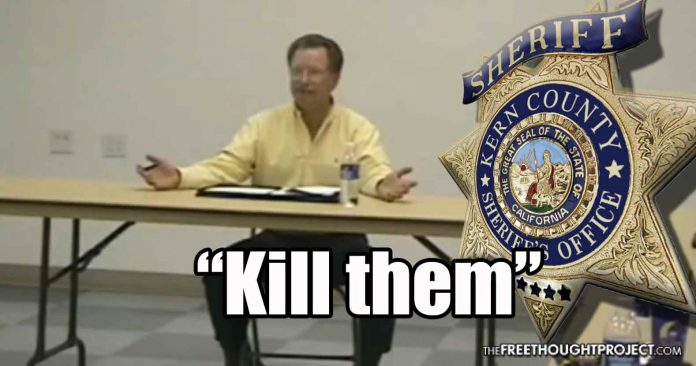 Bakersfield, CA — The sheriff of Kern County, Donny Youngblood is on the defensive this month after a local police union released a video in which he states it is “better financially” for law enforcement officers to kill suspects than to injure them.

According to KCDOA (Kern County Detention Officers Association), the union who released the video, the footage is from an endorsement interview with then Sheriff candidate Donny Youngblood.

The Kern County Detention Officers Association (KCDOA) believes that the Kern County Sheriff’s Office is in desperate need of positive changes for the betterment of all of Kern County citizens. Your Detentions Deputies know it is time to elect a new Sheriff who will bring a fresh approach and new ideas to tackle long standing issues facing department administration.

Recently, KCDOA reviewed archived video of an endorsement consideration interview with then Sheriff candidate Donny Youngblood prior to his first term in office.

In responding to a question posed to him regarding specific areas of Deputy training, Donny Youngblood said, “When a guy makes a bad shoot on somebody and kills them, $3 million dollars and the family goes away.” He continues, “When a deputy shoots somebody, which way is better financially? To cripple them or kill them for the county?”

An off camera interview attendee states, “Kill them.”

Donny Youngblood replies, “Absolutely, because if you cripple them you have to take care of them for life and that cost goes way up.”

This sheriff stands behind his claims too. According to a five-part series by The Guardian, covering police killings in 2015, Kern County’s deputies and police officers are “America’s deadliest police.”

As the AJC points out, “in that same time frame, nine people were killed by New York police officers in a city with nearly 10 times the residents of Kern County, which had a population of just under 875,000 in 2015. The New York Police Department also had 23 times the police officers patrolling the streets than Kern County did.”

What’s more, the ACLU also found similar violent tendencies. In a November 2017 report, the ACLU found that “both KCSO and BPD have engaged in patterns and practices that violate civil rights. KCSO and BPD officers have engaged in patterns of excessive force—including shooting and beating to death unarmed individuals and deploying canines to attack and injure— as well as a practice of filing intimidating or retaliatory criminal charges against individuals they subject to excessive force. Deficient oversight and accountability structures have allowed law enforcement misconduct to go unchecked and in some cases escalate.”

Chris Ashley, a director of the police association, told the Guardian that the group was “disgusted” by the sheriff’s remarks. “But we have been disgusted with Donny Youngblood’s leadership for more than a decade,” he said.

However, they knew this video existed for years, yet they chose not to release it until this year—coincidentally, as the sheriff seeks re-election.

Although the release of this video is an obvious attempt to smear a political opponent, it does provide some much-needed insight into one of the deadliest groups of government agents in the country. The video below should serve as a wake up call to those who continue to ignore the violence carried out on a daily basis by those sworn to protect.