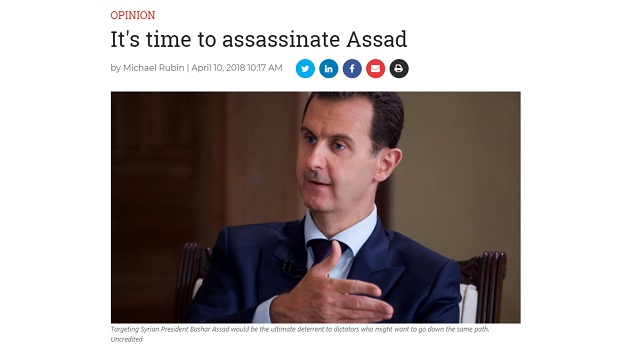 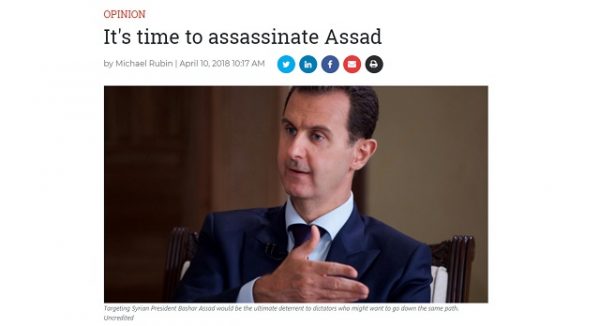 If you thought Russia interfering in America’s elections was a big deal, you might want to hear the Washington Examiner’s Michael Rubin’s plan for interfering in Syria’s affairs.

Rubin, who is a former Pentagon official and a current resident scholar at the American Enterprise Institute, writes:

What can Trump do? Former President Barack Obama’s unwillingness to enforce a red line on chemical weapons use hemorrhaged his credibility and convinced Assad and his Russian patrons that they could, quite literally, get away with murder. But if he is serious about restoring a deterrent to the use of chemical weapons, then he should not rely on some symbolic cruise missile response. That was his tactic last year, but its lasting impact was negligible. For that matter, that was Bill Clinton’s tactic of choice in 1998 after al Qaeda attacked U.S. embassies in Kenya and Tanzania, and a middle-of-the-night cruise missile strike into Afghanistan did nothing to convince al Qaeda and their Taliban protectors to cease their terrorist activities ahead of the Sept. 11 attacks.

Targeting Assad, however, would be the ultimate deterrent to dictators who might want to go down the same path. There is nothing absolute about the prohibition on targeting world leaders. President Gerald Ford issued Executive Order 11905, which declared that “no employee of the United States Government shall engage in, or conspire to engage in, political assassination,” but that is of only questionable application to targeting a commander in chief militarily. While President Abraham Lincoln administration had in 1863 instructed Union forces not to engage in assassination, the subsequent international agreements joined by the U.S. (the 1907 Hague Convention and the 1949 Geneva Conventions) were vague on the question of assassination.

[…]Certainly, a decision to target a foreign leader should not be taken lightly. Some critics will question whether such targeting would open enemies to try to assassinate U.S. leaders. Let’s put aside moral equivalence — the United States is not Syria.

Well, that’s all I needed to hear!

Though General Mattis and U.S. allies are still “assessing the intelligence” needed to prove Assad was behind the alleged chemical attack in Douma, Rubin takes Assad’s guilt as a given.

Rubin goes on to say there may be a risk of radical terrorists taking over after Assad is assassinated, but it’s “more likely, a member of Assad’s inner circle will step in and take the reins and make it possible for all sides to save face and begin discussing a provisional government.”

Indeed, nothing brings people to the table and gets them working together quite like a political assassination!

Everything worked out so well in Iraq and Libya, what could possibly go wrong?