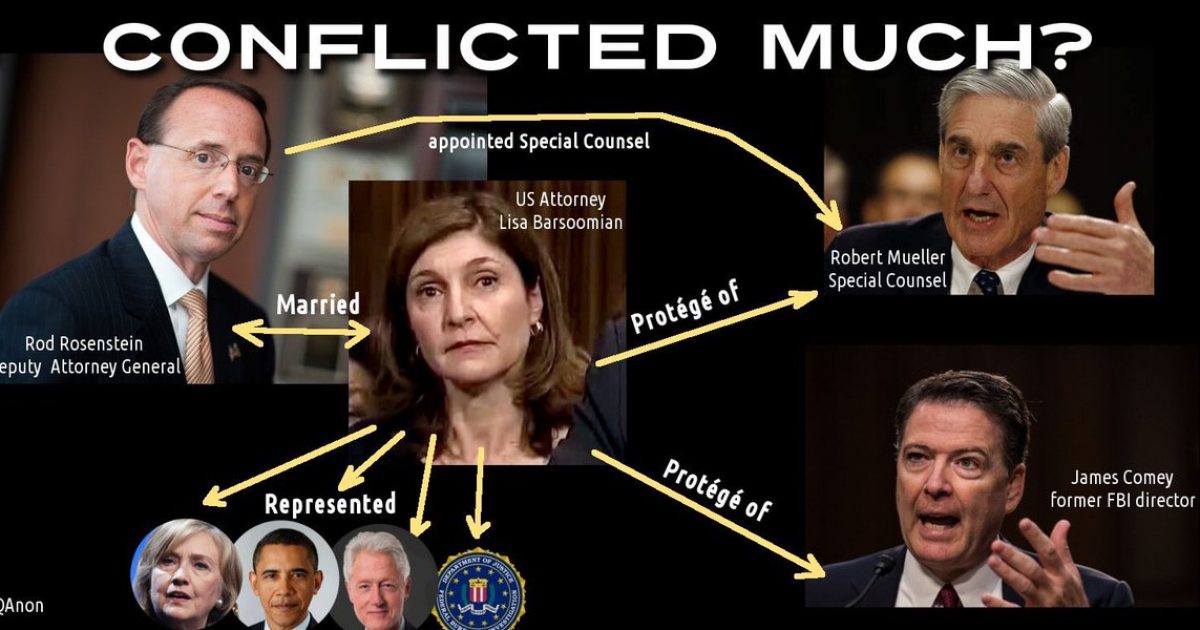 On Wednesday afternoon, after being threatened with Contempt of Congress charges and a possible impeachment vote, DOJ Deputy Attorney General Rod Rosenstein allowed Devin Nunes and Trey Gowdy to view a relatively, though not completely, unredacted copy of the EC that opened the Trump collusion investigation.

This document, along with thousands of other documents, was subpoenaed last August. There have been numerous unsuccessful attempts by Nunes since then to obtain these documents. Each request has been met with stonewalling by both the DOJ and the FBI. They know that if they can keep this going through the midterm elections, they will have gotten away with all of their wrongdoing during the 2016 election season and its aftermath.

Several days ago, we learned from Dick Morris, journalist and former advisor to Bill Clinton, that Rod Rosenstein’s wife, Lisa Barsoomian, is a Washington Freedom of Information Act (FOIA) attorney. She is a protégée of R. Craig Lawrence, whose law firm defends clients, all Democrats, against FOIA requests.

Rush Limbaugh also sheds light on how “incestuous” and unjust, these interrelationships are. He discusses how Washington is “like the hillbillies in the mountains, everybody is related to everybody. It’s a gigantic revolving door and they all know each other or are married to each other and they work for the same people over and over and over again.”

He reminds us that Rod Rosenstein was on the prosecution team that fully exonerated Hillary Clinton in the Whitewater scandal (and both Clintons in the Travelgate and Filegate scandals). Shortly after Rod Rosenstein cleared Hillary, his wife represented Bill Clinton in a 1998-99 civil case in federal court.

Limbaugh points out that Rosenstein appointed Mueller and gave him “free rein” in his investigation of Trump, which is not allowed under DOJ regulations.

“DOJ regulations require that a crime be named and that is what the special counsel shall pursue and, if during said investigation, the special counsel encounters something else that is not within the purview of the crime being investigated, he’s got to go back to the person who appointed him and seek permission to add this newly discovered crime to the investigation. None of that has happened.”

Why not Mr. Rosenstein?

Rosenstein also allegedly signed off on a renewal application for the FISA warrant used to spy on Carter Page. You will recall this application used British Spy Christopher Steele’s widely discredited Trump dossier as the basis for obtaining the warrant.

In May 2017, Rosenstein wrote the memo outlining the case for firing FBI Director James Comey. And shortly after Trump fired Comey, Rosenstein appointed his friend, Robert Mueller, to head the investigation of Trump’s Russia collusion. Hmmm.

Rod Rosenstein’s hand can be seen in almost every questionable political act in the left’s attempt to take down Trump. And up until now, there’s been scant attention paid to him.

Monday’s Raid On Michael Cohen’s Office, Signed Off On By Rosenstein, Was A Calculated Move

Monday’s predawn raid of Michael Cohen’s office, home and hotel room was just the last straw. Mueller intended to provoke Trump. He and his minions were hoping that Trump would become so incensed; he would immediately fire Mueller. Fortunately, cooler heads prevented him from doing so.

The liberal’s war on Trump has been relentless and Monday’s raid brought hostilities to a whole new level. It’s open warfare now. Any pretense of civility is gone. Trump is now painfully aware that talking with Mueller is a very bad idea. Perhaps that is the silver lining.

Mueller is not investigating possible Trump-Russia collusion, because he knows it doesn’t exist. Instead, he is searching for evidence of any possible criminal act that can be used to impeach Trump.

Barack Revealed His Agenda On The 2008 Campaign Trail.

On the 2008 campaign trail, Obama told supporters, “We are five days away from fundamentally transforming the United States of America.”

And indeed, he was true to his word. The Obama years changed America. As he filled every government institution with liberal appointees, they became weaponized. Now, these institutions have Trump in their crosshairs.

They are all in on it. The DOJ, the FBI, the State Department and the mainstream media all have their claws out for President Trump. All of these institutions are riddled with Obama and Clinton supporters. It’s positively byzantine.

Trump should have been advised early on that a major sweep of these staffers was necessary.

This feels like the moment in the 1975 version of the movie, The Stepford Wives

when Katherine Ross’s character realizes that even her husband has become “one of them.”

What Has Happened To The Rule Of Law In America?

Has America reached a place where elections and the rule of law no longer have meaning? “If the law is to apply to one party and not the other, then there is no law.” And if there is no law, then America is moving toward tyranny.

President Trump and his personal attorney, Michael Cohen, are held to account over a meaningless 2006 one-night stand, while Hillary Clinton is given a pass for deleting (and then destroying) 33,000 subpoenaed emails from the private server she used during her tenure as Secretary of State.

If the crimes of Hillary Clinton, the DOJ, the FBI and their enablers/cheerleaders, the mainstream media, are not proven by the midterm elections, the opportunity will be lost. And America, as we’ve known her, will be lost. The clock is ticking.

The deck is stacked against President Trump. He is a chicken, surrounded by wolves, and they’re just waiting for the right moment to consume him. This is not democracy; this is a travesty. America is no longer a nation of equality and justice; Lady Liberty has just registered as a Democrat.