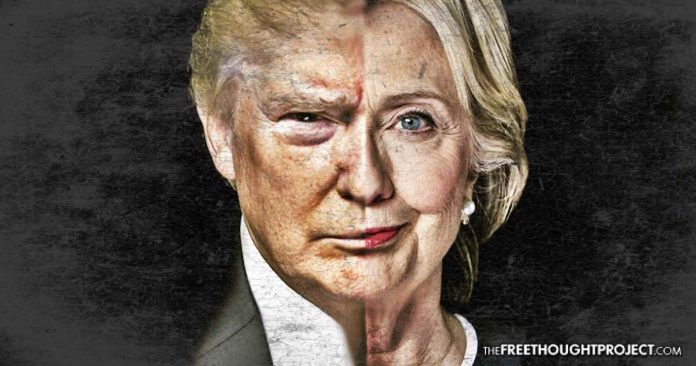 As Donald Trump flip-flops on a number of key issues that made the public believe he was the “outsider” candidate who would change the status quo in Washington, Americans are reminded that the current president now appears to have more in common with his Democratic opponent, Hillary Clinton, than he does with the candidate they thought they elected.

Not only did Clinton lose the 2016 election, but she is now forced to watch the man who won it using her ideas and taking credit for them—making many wonder whether Trump is just caving to the pressure exerted by the overwhelming number of neoconservatives he has surrounded himself with, or if these were his views all along and he just said what he needed to say to get into office.

Here are five key issues where Trump is now just like Clinton:

1. Despite promising to end the war in Syria, Trump is now escalating it to push for the overthrow of Assad—just as Clinton would have done

When Trump said that he blamed the Obama administration for destabilizing the region in Syria and creating the perfect climate for a group like ISIS to grow and flourish, Americans were shocked. They believed that because Trump clearly saw that Obama’s downfall was his determination to overthrow Syrian President Bashar al-Assad, then surely Trump would be different.

However, even after killing thousands of civilians in Syria in an alarmingly short time period as part of a mission to eradicate ISIS from the region, Trump is now escalating the conflict between the U.S. and the Syrian government. Every time the mainstream media has claimed that there was a chemical attack in Syria and Assad was behind it, Trump has jumped on the bandwagon and used the unverified reports to call for more war—even when there is no proof to support them.

Now, Trump looks exactly like Clinton, who has spent the last several years claiming, “The world will not waiver, Assad must go!”

Many dead, including women and children, in mindless CHEMICAL attack in Syria. Area of atrocity is in lockdown and encircled by Syrian Army, making it completely inaccessible to outside world. President Putin, Russia and Iran are responsible for backing Animal Assad. Big price…

2. Trump once railed against Clinton for catering to Wall Street—then he did the same thing when he pardoned five megabanks for rampant fraud and corruption

During the 2016 election, Trump was one of many who scrutinized Clinton for charging nearly $3 millionfor the speeches she gave to major Wall Street banks from 2013 to 2015. In addition to using Clinton’s ties to Wall Street as talking points during presidential debates, Trump openly criticized her on Twitter, claiming that “Hillary will never reform Wall Street! She is owned by Wall Street!”

However, during the first year of his presidency, Trump quietly issued pardons to Citigroup, JPMorgan, Barclays, UBS and Deutsche Bank—all megabanks facing charges of fraud and corruption. This move is notable, not only because it goes against Trump’s claims on the campaign trail, but also because he reportedly owes at least one of the banks a significant amount of money.

Trump has been using Deutsche Bank since the 1990s, and Financial Times reported that he now owes the bank at least $130 million in outstanding loans secured in properties in Miami, Chicago, and Washington. However, a source told the Times that the actual number is likely much larger at $300 million.

I hope we never find life on another planet because if we do there's no doubt that the United States will start sending them money!

3. Americans welcomed the idea that Trump would improve diplomatic relations with Russia—but instead, he is creating more conflict, just as Clinton would have done

While the mainstream media has spent an agonizing amount of time pushing the false narrative that Russian President Vladimir Putin ordered his government officials to hack the servers of the Democratic National Committee to gain information that would harm Clinton and help Trump in the 2016 election, Trump has devoted nearly as much time to calling the claims a “Witch Hunt” against him.

In fact, Trump acknowledged the amount of effort Russia put into eradicating ISIS from Syria and he claimed that he wanted to work with the nation, instead of against it.

Met with President Putin of Russia who was at #APEC meetings. Good discussions on Syria. Hope for his help to solve, along with China the dangerous North Korea crisis. Progress being made.

However, Trump’s tune has changed since then, and he now sounds a lot more like Clinton, who claimedto wholeheartedly believe the “Russians hacked our election” narrative, and who pushed for increased tension between the U.S. and Russia.

In an alarming Tweet after the latest unverified reports of a chemical attack in Syria, Trump took the bait and went after Putin, threatening a level of aggression that could provoke World War 3.

4. Trump once said the Trans-Pacific Partnership would be used to “rape our country,” but he now shares the same hope for its potential as his former rival

Trump called the TPP a “job killer” and said he believes the deal is “another disaster done and pushed by special interests who want to rape our country—just a continuing rape of our country.”

The Trans-Pacific Partnership is an attack on America's business. It does not stop Japan's currency manipulation. This is a bad deal.

In contrast, Clinton praised the TPP and called it the “Gold Standard” of trade deals. It now appears that Trump is starting to see potential in the deal and he could be breaking yet another one of his campaign promises by pledging his support to it.

Would only join TPP if the deal were substantially better than the deal offered to Pres. Obama. We already have BILATERAL deals with six of the eleven nations in TPP, and are working to make a deal with the biggest of those nations, Japan, who has hit us hard on trade for years!

5. Trump said he wanted to hold Saudi Arabia accountable for its role in 9/11, but he appears to be taking notes from the Clintons and he is now closer to the Saudis than ever

Once upon a time, candidate Trump promised that if he was elected, he would hold Saudi Arabia accountable for the role it played in the 9/11 terrorist attacks. His statements struck a chord with a number of Americans who have become frustrated with the United States’ continued ties with the Saudis, despite evidence that the county provided funding for the hijackers who carried out the attacks.

Saudi Arabia should be paying the United States many billions of dollars for our defense of them. Without us, gone! @AlWaleedbinT

However, once Trump was in office, his tune quickly changed, and he must have realized why the Clinton Foundation accepted $25 million in donations from a country that denies basic civil rights to a number of its citizens.

Saudi Arabia became the first stop on Trump’s first foreign trip as president, which helped to pave the way for the completion of the largest single arms deal in U.S. history. He has since worked with the Saudi government to bring unprecedented death and destruction to the poorest country in the Middle East, and the reign of terror shows no signs of stopping any time soon.

I have great confidence in King Salman and the Crown Prince of Saudi Arabia, they know exactly what they are doing….