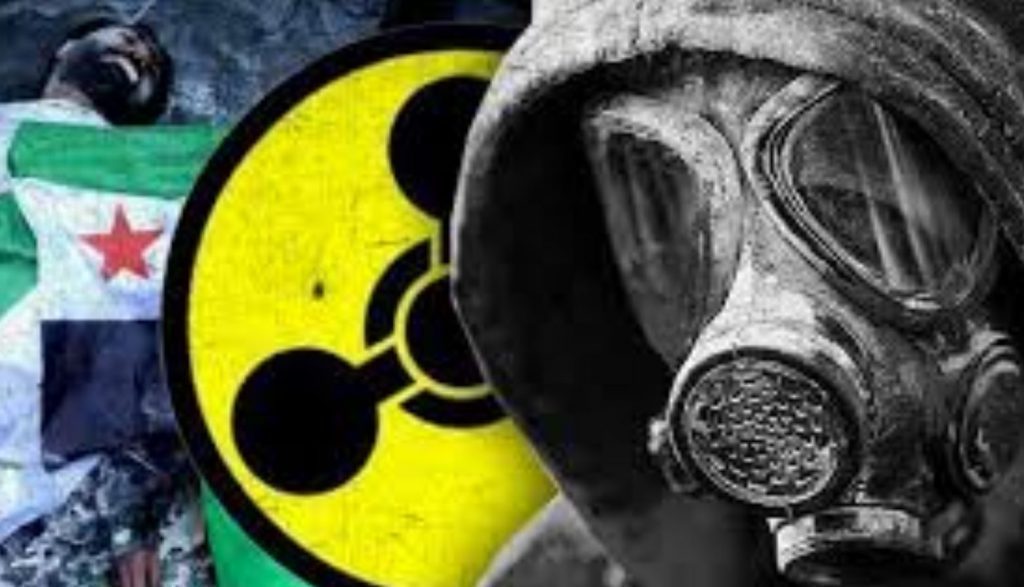 A Twitter user @tarek_oo7 has pointed out several strange anomalies in the White Helmets footage after the alleged chemical weapons attack in East Ghouta suburb of Douma (east of Syria’s capital city of Damascus.)

More videos uploaded by the white helmets of the alleged chimical attack in #Douma,i went through them and i noticed something extremely wrong and does not add up.
The white helmets were first on site and they took this video: (please be aware the vid is graphic) pic.twitter.com/VyLOV7LFDe

The first thing Tarek points out is a video from the second day that claimed a different room where the gas impact site was.

He suggested users to look at the impact site on the ceiling of the first video and compare the size of the hole. Tarek stated the hole in one of the first videos the White Helmets uploaded has a different size and shape than the previous video, coming to the conclusion that the rooms are different in both videos.

Tarek further detailed that “the impact site where the yellow cylinder was found is not the same site where the victims were found. Something is not right. There should be more investigations these white helmets are playing with evidence.”

Finally, the Twitter user expressed doubt about the yellow color left on the bed, stating it should have been bleached white due to the chlorine, citing a control test of 1 ton of chlorine. He noted that in “30 minutes time notice there is no yellow marks or any leftovers under the cylinder.”

10-As for the yellow colour left on the bed, here is a controle test of 1 Ton of chlorine, after 30 mintes notice there is no yellow marks or any leftovers under the cylinder in this test: chlorine shoukd have bleached the bed cover white not yellow!! pic.twitter.com/DwMHLPn4tf

Other items of concern include lack of damage to the compressed gas cylinder that was allegedly dropped from a helicopter of the Syrian Arab Air Force (SAA.) A second compressed gas cylinder was allegedly filmed on April 9th on the roof of a building hit by the attack. However, the video was released by the White Helmets on April 10th, a day after Russian service members visited the parts of Douma where the alleged chemical attack took place. According to the Russian Defense Ministry, no traces of the chemical attack were found.

This time the cylinder appears to be a bit damaged unlike the last one. No doubt, the criticism faced by the White Helmets after the first video was used to improve the second one.

So, the questions are:

Lt. Gen Poznikhir added that the White Helmets had made several failed attempts to stage chemical attacks during the recent battle in the Eastern Ghouta region. The Russian commander also revealed that the Syrian Arab Army (SAA) had discovered toxic agents in an underground workshop of the militants during its operations in Eastern Ghouta.

“On March 3 the militants’ workshop was found in an underground tunnel in Hazrama. Makeshift ammunition pieces were charged with poisonous agents there,” Russian Lt. Gen Poznikhir said.

The Iranian news agency FARS also reported that the SAA had allegedly discovered a location in the town of Saqba in Eastern Ghouta, which had been used by the White Helmets to fabricate videos against the SAA. This report can be linked to the information provided by Lt. Gen Poznikhir and the anomalies pointed out by @tarek_oo7 in the White Helmets videos.

Shortly before the recent attack in late March, Activist Post reported that the Syrian Army had claimed it had uncovered a chemical weapons “workshop” in East Ghouta after having liberated the territory.

What’s more, in that same report the government had warned of the possibility of a false flag attack blamed on the Syrian government.

After sweeping through the village of Aftris in Eastern Ghouta following the withdrawal of terrorists from the area, Syrian Army Colonel Feruz Ibrahim told reporters that, “Presumably, the equipment of these munitions could be produced as part of a false flag accusation that government troops used chemical weapons.”

“The Syrian Foreign Ministry pointed out that more than 40 tons of poisonous substances were found on the territories, liberated from terrorists,” Igor Kirillov, the commander of Russia’s Nuclear, Biological and Chemical Protection Forces, said on March 21.

Medical specialists in the region who have worked in the Damascus suburb of Ghouta for years told journalists they did not see any evidence of any chemical incident taking place in the area in January. They also did not confirm reports about an alleged chlorine gas attack that, supposedly, affected more than 20 civilians on January 22nd, RT reported.

“At some point, our [hospital] received six people, who were allegedly suffering from respiratory problems. Following a medical examination, we did not find any problems at all, any traces of chemical agents,” Seif Aldin Hobia, a member of the Syrian Arab Red Crescent, who worked for the last seven years at the central hospital of Douma in Eastern Ghouta, said. Recalling the events that took place in January, he added: “we had no evidence of chemical agents being used [in the area].”

His words were echoed by another medical specialist from the Syrian Arab Red Crescent, Muhammad Adnan Tabazhu, who claimed that the medics obtained no evidence of chemical weapons being used in Eastern Ghouta.

Additionally, Swedish medical doctors have raised questions about the legitimacy of the medical procedures being conducted in the White Helmets documentary on Netflix and stated the groups so-called “rescue” procedures filmed in White Helmets propaganda videos is a complete staged hoax, Activist Post reported.

The procedures in the video below have been carefully analyzed to show that they were carried out on a dead child, who may have been killed by the White Helmets in order to film the footage. The smoking gun evidence from the video released above, in sequenced screenshots, clearly showing that the White Helmets are not saving babies, but killing babies, The Duran reported.

It is worth noting that the region in Syria that Western sources are from is controlled by the Al Qaeda-allied terrorist group Jaysh al-Islam. Further, the reports we’re seeing cited by the press are coming from the Western-backed and Al Qaeda-affiliated propaganda firm the White Helmets and the “pro-opposition Ghouta Media Center.”

White Helmets leader Raed Salah, was denied entry into the U.S. at Washington’s Dulles International Airport and deported, due to “extremist connections” while on his way to receive a humanitarian relief award at a gala dinner hosted by USAID.

As WikiLeaks noted, the White Helmets are mostly funded by the U.S. government. Although theyalso get funding from London as its primary PR front in pursuit of a “No Fly Zone” in Syria.

Syria's White Helmets are mostly funded by the US government https://t.co/jCwd3YogKF

In February, U.S. Secretary of Defense James Mattis admitted that the U.S. has had “no evidence” that the Syrian government used the banned nerve agent Sarin against its own people.

It’s worth noting that the White Helmets and Al-Qaeda have put out propaganda before by faking attacks in the Middle East.

The White Helmets faked a crisis scene previously that looked shockingly real for the infamous “mannequin challenge.” The video was then pulled from their YouTube channel after it raised immense levels of controversy. It was labeled as distasteful, but not before others on the Internet downloaded it and re-uploaded it.

Shockingly, this isn’t the first time that MSM has fallen for terrorist propaganda. In 2016 it was widely reported that there was a parked car bomb that killed 10 in a Baghdad neighborhood. The story was said to have come from police sources, but there was one small problem: after the story went viral, a video was leaked online showing the fake staged attack and actors faking injuries.

The Organisation for the Prohibition of Chemical Weapons (OPCW) has announced they have been gathering information from all available sources and analyzing the data. At the same time, OPCW’s Director-General, Ambassador Ahmet Üzümcü, has considered the deployment of a Fact-Finding Mission (FFM) team to Douma to substantiate these allegations, Relief Web reported.

With this new evidence, we need to conduct a thorough, unbiased investigation before this incident spirals into World War Three.  It seems more plausible that the rebels amid defeat orchestrated the attack to frame the Syrian government. Particularly because there were multiple warnings about an attack in Syria prior to the actual provocation.

The next question that has to be answered is whether this attack happened and was carried out by the “rebels” against their own people or whether it was entirely faked from the start. The other alternative is the footage is fake yet the attack happened and there were real casualties.

In order to determine what the case is there needs to be a formal on-ground investigation and soil and clothing samples need to be taken, as well as samples on the actual alleged shell that contained the chlorine. What we shouldn’t do is jump to conclusions without having all the information at hand to come to a general consensus about what took place. In other words, we shouldn’t start World War Three over unverified information.