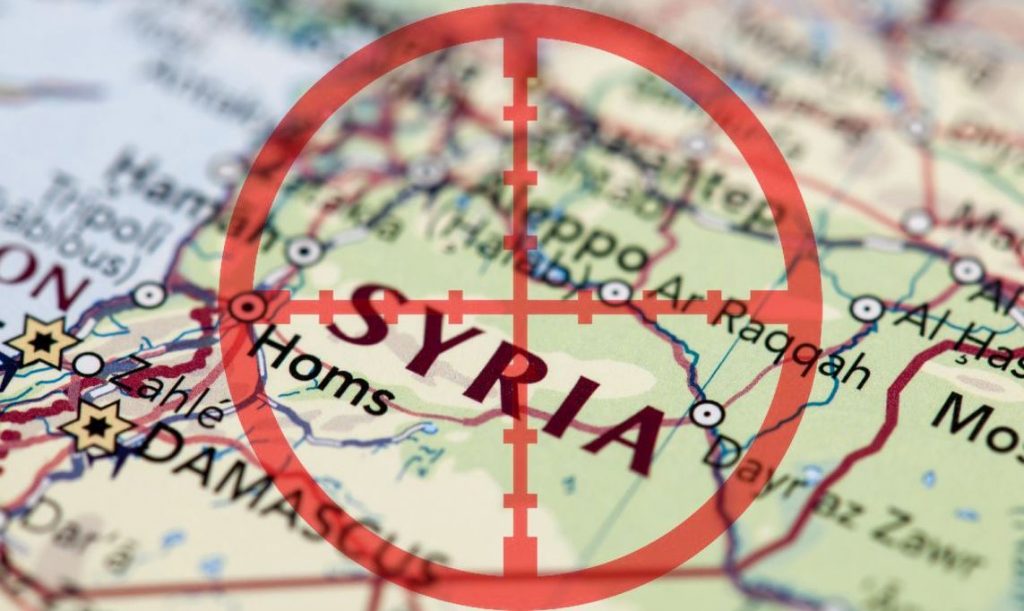 When I wrote the article about the “Most Dangerous Decade” two weeks ago, I didn’t realize that my time frame was too optimistic. What’s happening now in Syria has the potential to start WW III – numerous American, British and French aircraft carriers, submarines and fighter jets have converged just off the Syrian coast, while Russian warships and planes are scrambling to defend and retaliate.

Although Americans are starting to wake up, many people are still caught up in the mainstream narrative regarding the Syrian war. I have written a book and many articles on this topic, but perhaps what the average person needs is a really short article that highlights the truth and debunks the common lies about Syria, Assad and the war.

Nope. Fact is that, starting in 2011, tens of thousands of foreigners – Al Qaeda and other jihadists – were sent into Syria to overthrow Assad. The US and its allies – Saudi Arabia, Qatar, Turkey and Jordan – assisted in buying and transporting weapons to the “insurgents.” Special forces from the US, UK, France and Israel also spent billions of dollars arming and training the terrorists, a.k.a “moderate rebels.” What’s happening in Syria is not a civil war – it’s a proxy war. Assad Kills his Own People

Assad has been fighting the Islamic terrorists for seven years. It’s cynical and Orwellian for the West to shed crocodile tears for the Syrians and blame Assad for this brutal war.

While the presstitutes make it look like Assad is fighting women and children, fact is that the rebels have highly sophisticated weapons – million-dollar tanks, US-made anti-tank missiles that cost $250,000, etc.

Assad protects Christians and other minorities. There’s no Sharia Law in Syria, and religious minorities have full freedom. The only group that’s “oppressed” in Syria is the violent Muslim Brotherhood, which has been banned for many decades. The Syrian opposition consists of Sunni extremists who have been persecuting and killing Shiites and Christians for the last seven years.

The mainstream media will never show how popular Assad is. War propaganda’s #1 rule is to completely demonize the enemy. Syria is a Jihadist Country

Less than 5% of the country are violent extremists motivated by Salafist/Wahhabi sectarianism. Syria has always been a secular, moderate country.

As a Pentagon memo warned even back in 2012, the US has been supporting the bad and evil guys – Muslim Brotherhood, Al Qaeda and ISIS. That’s the difficult truth that most Americans cannot accept. Calling them “moderate rebels” is just Orwellian doublespeak to sell the disastrous policy to the American public. What we did in Syria was basically what we did with the Mujahideen in Afghanistan in the 1980s. USA/UK Got Involved Only Because of Atrocities

Globalists and colonialists have been trying to overthrow secular Syrian governments since the late 1940s. From the 1950s thru the 1980s, the US and the UK tried to use Muslim Brotherhood for their subversive plots. In the 1990s, the Neocons made it clear that Syria had to be defeated.

In 2007, the Bush administration started funding the Muslim Brotherhood again. In 2009, the UK started a satellite TV station to broadcast anti-Assad propaganda.

In 2011, the US and its allies funded and armed the opposition to start the fake “revolution.” When it failed, they brought in Al Qaeda, created ISIS, and spent billions of dollars on this psychotic project. The US/UK governments have given more than $100 million to the White Helmets, who are conniving jihadists in uniforms. They are armed and only operate in rebel-controlled areas. They participate in extrajudicial executions and possibly in organ trafficking. The fact that they won an Oscar just goes to reveal the unfathomable levels of deception in the New World Order.

Is it really hard to believe that jihadists would kill people and children in order to frame Assad? Syrian rebels put children in cages and use them as human shields; the rebels have bombed buses full of children simply because the kids were Shiite Muslims; and the “moderate rebels” use even their own daughters and sons – some as young as nine years old – as suicide bombers. Yet, we are supposed to trust the pictures, videos and the false flag narratives that these head-chopping barbarians feed us? There has never been a single proven case of Assad using chemical weapons. No, you can’t determine anything from videos and pictures – we don’t know when and where they were taken; and you certainly can’t determine how the people died. Biological samples sent to the CIA by Al Qaeda should be ignored as well. Proper due process involves independent weapons experts going to the alleged sites, specialists performing autopsies and so on.

The UN has confirmed that ISIS and Al Qaeda in Syria have used chemical weapons more than 100 times. The most hypocritical aspect of this whole drama is that, after the fall of Gaddafi, the US transferred Libya’s chemical weapons (sarin, mustard gas and others) to the Syrian rebels.

If Assad Loses, There Will be Peace in Syria

If Assad goes away, the tiny country of Syria will be broken up into ethnic regions; millions of Christians and Shiites will be persecuted, killed or driven from their homes; ISIS and Al Qaeda will rule the Sunni region; and the bigger, deadlier conflict – Iran War – will begin shortly. America will spend a few trillion dollars, millions of people will be killed, and Europe will be flooded with more refugees. In other words, it will be a wet dream for Neocons, Israel, globalists and the military-industrial complex.

This is, of course, a quick summary. You can find more details in my book, Deconstructing the Syrian War which also delves into history, geopolitics, Islamic terrorism, war propaganda and the bigger picture about the struggle for global hegemony. If Americans and Europeans don’t understand the true motives and facts about the Syrian war, they will be lead into calamitous military adventures and destructive global wars in the near future.

Chris Kanthan is the author of a new book, Deconstructing the Syrian War. Chris lives in the San Francisco Bay Area, has traveled to 35 countries, and writes about world affairs, politics, economy and health. His other book is Deconstructing Monsanto. Follow him on Twitter: @GMOChannel