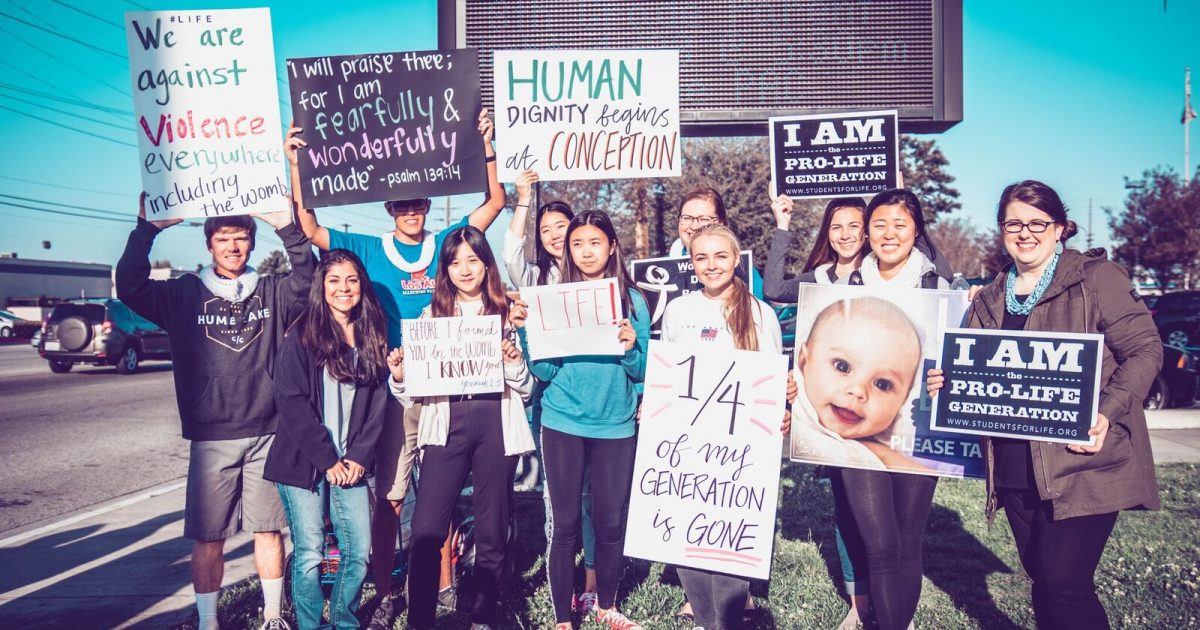 While the mainstream media focused and amplified the message of the March For Our Lives protest and the student walkouts led by David Hogg to attack the God-given rights of Americans, they largely ignored students from several states across the nation who protested Planned Parenthood and the murder of the unborn.

The walkout was organized by Students for Life of America.

It was a tale of two protests. After a school walkout against gun violence in March, students across the country organized a pro-life walkout in support of the unborn and pregnant and parenting students. But the networks only covered one of them.

On Wednesday, the three broadcast networks (ABC, CBS, NBC) never once mentioned the pro-life walkout during their news shows on the night of the event, April 11. In contrast, the same evening shows devoted more than 10 minutes to the gun walkout the day it happened. This comes after the networks covered the March for Our Lives 13 times more than the pro-life March for Life.

The walkout site listed 191 high schools and 81 colleges as participating. But according to a Tuesday statement from Kristan Hawkins, the president of Students for Life of America (SFLA), which helped organize the event, “more than 350 students and student group leaders from across the country have contacted Students for Life about their plans to stand with pregnant and parenting students.”

The site called for an end to abortion and the defunding of Planned Parenthood:

On Wednesday, April 11th, we will walk out of our classes for 17 minutes of silence and prayer. We will stand silently outside outside honoring the 10 children who will violently die during that time at a Planned Parenthood abortion facility … We will kneel and pray for the end of legal abortion in our nation.

This seems to be a serious Pro-Life group that does not have its goal set on merely regulating abortion as many pro-life politicians have been doing for decades, but abolishing it.

“We are the Pro-Life Generation and we will abolish abortion,” is the group’s slogan.

The group is a 501 non-profit organization that seeks to end abortion, euthanasia, and infanticide by educating students on these issues and calling them to action.

“Across the country, pro-life students and groups stood up for the 321,384 babies killed by Planned Parenthood every year, against the violence of abortion, and in support of pregnant and parenting students,” SFLA president Kristan Hawkins said in a statement.

“In pictures worth millions of words, we saw students walking out, praying, and chalking pro-life messages to bring attention to the fact that one-fourth of our generation has been snuffed out of existence because of legalized abortion,” she added.

So honored to join students at Los Alamitos High School in LA today for the #ProLifeWalkout. Look at this awesome display they also set up to remember the 1700 that will be lost today because of #abortion! #defundPP #abolishabortion pic.twitter.com/DRvzLK18mJ

The website for the walkout listed high schools and colleges where students participated, including private schools.

So, how did it all turn out?  Take a look at these pictures from the walk out.

Thanks to the #prolifegen at Moriarty High School in New Mexico for participating in the #prolifewalkout today! pic.twitter.com/T4rAp29mYN

Proud to stand with Morality High School students during their time of silence for the their classmates lost to abortion and women hurt at during the #ProLifeWalkout! pic.twitter.com/CJekGhuGFr

Please pray for all the students participating in the #ProLifeWalkOut today. The walkout begins at 10 a.m. and will last for 17 minutes. Students will stand in silence and prayer to mourn the loss of the ten babies that have been aborted at Planned Parenthood in that time frame. pic.twitter.com/NlTQpXsxKn

We will abolish abortion! pic.twitter.com/t0Jgsxlvgp

Furthermore, it seems apparent that these students recognize the Creator in the midst of it all and that life is something precious that is not only a fundamental right, but something taht should be fought for. 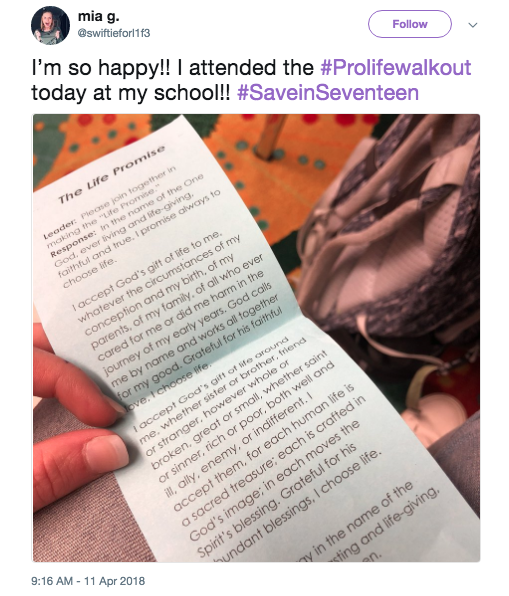 All did not go without those who wanted to, in large part, silence some of the students.

Despite the student receiving backlash from administrators and editors of the school paper, he successfully managed to organize a nationwide campaign to, in his words, “honor all the lives of aborted babies pretty much. All the millions of aborted babies every year.”

As noted at Life News, mainstream media coverage of the protests was minimal in contrast with the anti-gun student march held last month.

Some students also claimed they were suppressed by school principals who tried to talk them out of holding walkouts.

“My principal has proposed a compromise, he wants me to meet with the FCA and do a ‘meet at the pole’ at 8:30 so that ‘we don’t disrupt instruction,’” one student told Students for Life. “He also told me it doesn’t need to go to the media (I’ve already made a press release and sent it to local press.”

The Sacramento Bee reports students at Gillespie’s high school were not disciplined for holding the walkout.

Good for them.  At a time when Millenials are being mocked and put down, I’m glad to see that there is still a remnant of young people who are standing for the right things in our land.  May God richly bless their efforts and may we see full and true repentance of the murder of the unborn and abolish abortion in our lifetimes.  God help us!