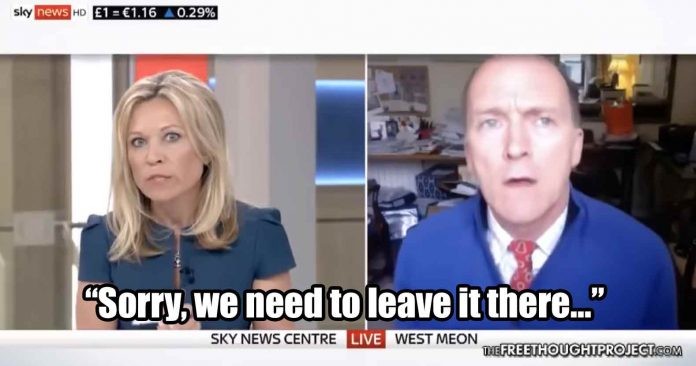 An interview between Sky News and one of Britain’s former senior military officials on reports of a chemical attack in Syria was cut short when Major-General Jonathan Shaw started to question the logic behind the narrative that the Syrian government would intentionally launch an attack on its own people.

After serving as the commander of the British Armed Forces in Iraq, Major-General Jonathan Shaw has seen a side of the United States’ War on Terror that is hidden from the general public and covered up by the mainstream media.

In the interview with Sky News, Anchor Samantha Washington asked Shaw about whether Syrian President Bashar al-Assad’s denial of responsibility for a reported chemical attack last week would force the UK to seek approval from Parliament before launching airstrikes targeting the Syrian government.

“You know, quite apart from all that, the part that seems to be missing from this—and this was actually mentioned by the ambassador—is what possible motive might have triggered Syria to launch a chemical attack at this time in this place?” Shaw replied. “The Syrians are winning, don’t take my word for it, take the American military’s word for it.”

The general referenced comments made by the commander of United States Central Command, Joseph Votel, during a hearing with the Senate Armed Services Committee Transcript last month. In an exchange with Republican Sen. Lindsey Graham, Votel discussed the current state of the war in Syria:

GRAHAM: Is it too strong a statement to say that, with Russia and Iran’s help, Assad has won the Civil War in Syria?

VOTEL: I do not think that is too—that is too strong of a statement. I think they have provided him the wherewithal to—to be ascendant at this point.

GRAHAM: Is it still our policy that Assad must go?

VOTEL: I don’t—I don’t know that that’s our particular policy at this particular point. Our focus remains on the defeat of ISIS.

As General Shaw noted during his interview with Sky News, even U.S. officials are admitting that the “civil war” between the Syrian government and the Islamic State has come to an end—so why would Assad carry out an attack on his own people that would result in greater intervention from world superpowers, such as the U.S. and the UK?

“He said that Assad has won this war, and we need to face that,” Shaw said. “And then last week, you’ve got a Tweet by Trump that America is finished with [the Islamic State] and we’re going to pull out soon, very soon. And then suddenly you have a gas attack…”

Washington then jumped in and cut Shaw off mid-sentence, insisting that they were “out of time” after he had only been speaking for less than one minute.

This interview serves as a reminder that while the mainstream media conduct interviews with experts and officials to make it look as though it is open to sharing different voices and opinions, Major-General Shaw appears to have shared the wrong opinion and the points he was highlighting are ones that clashed directly with narrative Sky News was selling to its viewers. This was further evidenced by the fact that the UK later teamed up with the U.S. and France to launch airstrikes targeting the Syrian government that have the potential to spark World War 3.

The question over what motive Assad would possibly have to launch a chemical attack on his own people when he knows that reports of chemical attacks in the past—even though they were unverified—have resulted in increased aggression from the United States, serves as a reminder that nearly every war in U.S. history has been started based on lies and propaganda that were used to blind the American people into believing the war was being fought “for their freedom.”

Watch the full interview below: