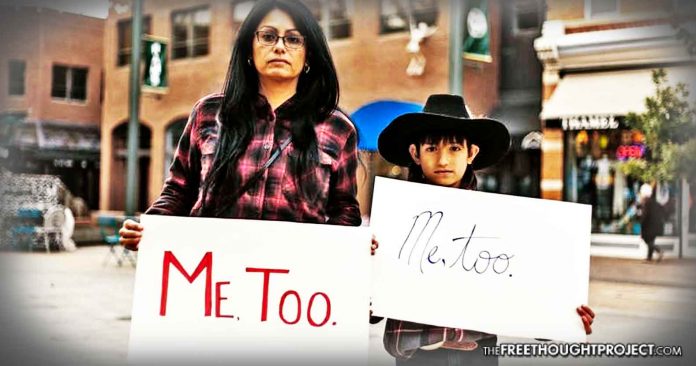 Anyone who has ever dealt with law enforcement when they’ve been a victim of a crime knows that the wheels of justice move very slowly. For some, the waiting is too much to bear and when police—who are often more concerned with prosecuting people for possessing a plant—refuse to go after criminals, they take matters into their own hands.

When Lydia Lerma discovered that her son had been molested by a man who was living with her ex-husband, the crime devastated her. However, the insultingly low bail placed on her son’s abuser was equally devastating as it allowed him to walk free for very little money. When police allowed Andrew Vanderwal to walk free after posting $750 bail, the family was doubly impacted. Worse still, Vanderwal fled to Mexico, escaping justice and infuriating Lerma, who then made it her mission to become a pedophile hunter.

Vanderwal had fully confessed to molesting Lerma’s son. Yet even with a full confession, a judge set the bail so low he was able to get out of jail and go on the run. Vanderwal quickly found refuge south of the U.S. border, eventually settling in Cuauhtemoc, Mexico, which is where Lerma found him, almost a year and a half after police let a confessed pedophile walk free.

“The only way I can explain it is, I hunt…And when you’re hunting and you see an animal, there’s that adrenaline rush — can I take this shot? Can I do this?”

Vanderwal had been a volunteer at a youth ice hockey league for boys eight years old and younger but no one had been molested at the ice rink—just at the man’s home, the same home where Lerma’s ex-husband lived. Assuming the role of a family member, the boy was subjected to calling the man, “Uncle Drew.” The abuse took place over a four-month period of time.

Upon his arrest, Vanderwal fled, but not for long. Lerma tracked him down like a hunter on a quest to kill a predator. One motivating factor driving Lerma was what she discovered in “Uncle Drew’s” room. It was a box with “Drew” written on the top of it. The Coloradoan detailed the contents of what Lerma considered to be his treasure chest:

“A big black boot box, taped shut. ‘Drew’ was scrawled on the top in cursive. Lerma’s hands trembled as she ripped off the packing tape. Inside was a boy’s baseball glove, a Nerf gun, a sneaker. All labeled with the same boy’s name. In plastic storage tubs beside the box, she found more: stacks of kids’ drawings, primary colors and marker stick figures. Sheets of notebook paper coated in the misshapen and misspelled words of children: ‘Dear Drew, thank you so much for evrything you do for me…’ ‘I am sorry for misbehaiveing.’ ‘Please forgive me.’ Then there were the photos: Boys smiling as Vanderwal clutched their shoulders. Boys peering from class photos, family photos, team photos. Boys Lerma had never seen before. She sat there, crying and shaking as she rifled through what she described as Vanderwal’s ‘trophy chest.’

Outrage, disgust, and bewilderment might be the only adjectives Lerma would use to describe her interactions with police during the subsequent investigation. Not only did they not seem interested in interviewing parents of the children displayed in the photos but they reportedly told the mother they would not go “fishing for victims.”

The DA reportedly told her to cool off, but that was not something she would do. She took it upon herself to find each parent and see if their son, too, had been a victim of “Uncle Drew.” Three more boys had been molested but only one went to the police. But by then, Vanderwal was gone. He fled Colorado and left his vehicle in El Paso when he crossed the border.

Lerma used her knowledge of information technology as a data resource manager to track him to Mexico. And, possibly, she tapped into her Apache roots to track him down once she hit the ground running. Lerma is also a Lipan Apache tribal member. Find him she did, predictably, around more children—apparent proof pedophiles never change their ways.

The angry mother was not only incensed enough to kill the man, she was capable enough as well. As an NRA-certified firearms instructor, she could have dispatched the confessed pedophile with precision and ease. She refrained, preferring to let the wheels of justice catch up with him and bring him back to face his judgment in court. The Coloradoan writes:

“She pestered police, the DA’s Office and the FBI for updates that she says rarely came. She contacted a private investigator. When she found out about Vanderwal’s abandoned car, she took to Facebook, which had long been her preferred platform for activism.”

Here is the video Lerma posted about four months after her son’s abuse was revealed and after she realized Vanderwal had fled to Mexico:

Lerma detailed the very real feelings she had, knowing her son’s predator had fled the country, coming to terms with her own sexual abuse she endured as a child and the strange phenomena that occurs when a young victim accuses an adult of sexual abuse. She also had harsh words for her son’s pedophile and others like him:

Lerma attempted to deal with her anxiety, trauma, and frustration with the justice system. According to the Coloradoan, she tried a lot of things to alleviate the anger, depression, and anxiety associated with the failed justice system. They write:

“In the ocean of days between Vanderwal’s reported confession and his return to Fort Collins, Lerma struggled to stay afloat. She couldn’t sleep without her son by her side. Sometimes she’d end up on the floor, sobbing in the fetal position. She’d go to the sweat lodge, burn sage, cedar and pollen. She tried medication, but it made her feel like a zombie.”

Even after locating several more victims and their families, after encouraging them to file police reports, and after several months of Facebook messages, Lerma finally decided that after a year it was time to take action on her own. She planned to quit her job, cash out her retirement, and go hunting for Vanderwal in Mexico. But then she received an anonymous tip in an email.

“Hello. I’ve seen you’re looking for Andrew Todd Vanderwal. I have some information about him if you’re still looking for him,” the email said.

After exchanging several emails with the tipster, Lerma learned that Vanderwal had been living in a German Mennonite community in Cuauhtemoc, using aliases such as “Charlie Harper Penner” and “Andrew Webster.”

The anonymous contact also gave Lerma the pedophile’s new cell phone number, his WhatsApp profile, and told her that “Uncle Drew” had taken up coaching a boy’s baseball team in the Mexican city. Lerma passed all of the new information along to FBI Agent Philip Jones, who reportedly told her in a text message:

“Lydia, I know your desire to get this guy, but DO NOT go to Cuauhtemoc. There’s nothing positive you can accomplish that is not already in the process of being accomplished.”

By the time Lerma received the message, she had already landed in Mexico with tons of cash in hand to get Vanderwal arrested and deported back to the U.S. for trial—but that plan was derailed by the FBI who told her Mexican authorities would likely tip off Vanderwal. Lerm’s new plan entailed getting close enough to take pictures to prove Vanderwal was living in Cuauhtemoc.

Armed with a camera, Lerma located Vanderwal and lured him to an Applebee’s parking lot in Mexico where she took his picture. He was wearing a shirt which read, “Live and Let Live.”

She sent the pictures to the FBI station in Mexico and asked them to arrest him by her birthday, which was February 13. On February 19, she got a text message that said, “Happy Belated Birthday.” After his arrest and return to Fort Collins, Colorado, Judge Susan Blanco raised Vanderwal’s bail to $750,000. He remains behind bars, but it is just a small consolation in a yearslong ordeal.

“To me, that’s mental torture. To have to visit this every day, and think about it every day. And if you think about it too much, you go all the way back to what actually happened, and that’s the most devastating thought of all. Somehow we’ve got to get past it,” Lerma told The Coloradoan.

Lerma said she won’t be able to rest until Vanderwal is permanently behind bars.

One mother’s quest for justice could have been much simpler. The authorities should have done a better job with the investigation, which would have uncovered a pattern of abuse and a story of a serial pedophile. Vanderwal could have remained behind bars awaiting trial, not given a chump change amount of bail. He could have been quickly arrested by the FBI when it was clear he was there in Cuauhtemoc, Mexico. Lerma’s determination should have been shared by the FBI and Fort Collins police. Instead, they sat back and let a mother do what they could have and should have done—taken matters into their own hands.